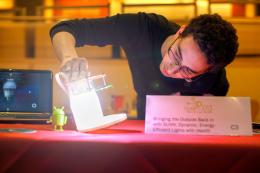 Breaking rules to do great things

"If you see something that needs to be made, make it.  If you see the need, so does somebody else. If you don't work on the solution, somebody else will." One look at Jeremy Blum's '13 M. Eng.,'12  B.S. personal website gives ample evidence that he practices what he preaches. He has helped create an indoor lighting system that mimics the sun and uses far less energy than traditional incandescent bulbs, he runs his own engineering consulting firm, he co-founded the PopShop co-working space for start-ups at Cornell, he founded and led the Cornell University Sustainable Design group, He was a member of the 2011 Kessler Fellows cohort, and he has designed electronics for consumer 3D printers and 3D scanners. Blum was recently hired by Google [x], a division of Google that focuses on building "moonshot" technologies.

This list of accomplishments becomes even more impressive when you realize that Jeremy Blum is not yet 24 years old.   Blum is part of a revolutionary wave of young engineers who hold their field to a higher standard. "I believe that creative engineering is indistinguishable from fine artwork," says Blum. He also believes in the power of engineering to make people's lives better. "We need to positively impact people. We cannot wait around thinking somebody else will do it. I do not like to be told that I can't do something."

At Cornell Engineering, Blum found a supportive environment for his ideas and his energy. "You can go to any school and learn just the academics. Cornell gives lots of chances for students to learn how to be creative, too. There are project teams, design classes, and access to all sorts of people from other majors," says Blum. "Engineers today have to understand different viewpoints, and Cornell is excellent in that regard. In the Cornell community you have the opportunity to learn about business, design, and collaboration."

Along with creating ways to make life better, Jeremy Blum also shows a serious commitment to sharing what he knows with as many people as possible. He has built many open source projects that he shares online, he has written a well-reviewed book about how to use the popular prototyping platform called Arduino, and his YouTube channel has more than 53,000 subscribers. Some of his how-to videos have nearly one million views.  Blum's advice for students of engineering comes straight from the field of economics: "Learn the law of diminishing returns," he says. "You can study 50 hours and get a B+ or you can study 100 hours and get an A-.  Is that A- really worth an additional 50 hours of your time?"  Blum continues, "It's okay to spend less time on class so long as you use that additional time to take advantage of all the great other opportunities that Cornell can offer you."

Blum certainly followed his own advice while at Cornell and now he finds himself on the team at Google [x], working on hardware for Google Glass.  "I feel like I have been in on two huge waves in technology.  The first was working on 3D printers at MakerBot, and now I've joined Google to explore the future of wearable technology. Working at Google is like working at an amusement park for engineers. I'm humbled to be part of a team with such amazing engineers and designers."  It is hard to predict exactly what Jeremy Blum will be doing in five years, but it is a safe bet that whatever it is will be creative, cutting-edge, and designed to make people's lives better.