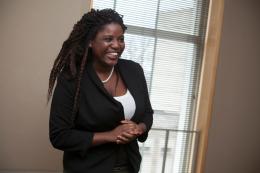 Liz Wayne Ph.D. ’15 BME says she majored in physics as an undergraduate at the University of Pennsylvania because she wanted to understand the world around her. Wayne’s thirst for understanding did not begin with her arrival in Philadelphia at the age of eighteen. In fact, she remembers knowing as far back as sixth grade that she wanted to learn all she could about science. In ninth grade, she found her curricular choices limited and unsatisfactory, “so I went to the library to teach myself,” says Wayne, who is now a postdoctoral fellow in the Carolina Center for Nanotechnology in Drug Delivery in the Eshelman School of Pharmacy at UNC Chapel Hill.

As a high school sophomore Wayne applied for a spot in the highly competitive Mississippi School for Mathematics and Science in Columbus. She was accepted and moved to the boarding school 250 miles from home. “I was so excited when I saw the course catalogue,” says Wayne. “It listed differential equations and AP calculus and physics—it had everything I wanted. Nobody from my high school had gone there before. Suddenly the question for me changed from ‘will you go to college?’ to ‘where will you go to college?’”

Wayne’s answer to that question was the University of Pennsylvania, to major in physics. “It was hard for my family to understand why I kept leaving,” says Wayne. “They thought I didn’t like them. But really, I was just going where I had to go to learn what I wanted to learn.” As a freshman at UPenn, Wayne applied for several internships in high-energy physics, but did not get them. She did get a National Science Foundation (NSF) Research Experience for Undergraduates (REU) in the area of biophysics. “I was excited. It made sense to me that studying physics is about developing a language (equations) to apply to the world. I saw right away that I could apply physics to biology and do interesting things.”

That early research experience was enough for Wayne to know that she wanted to earn a Ph.D. After graduating from Penn, she moved to North Carolina to start a doctoral program in biology at the University of North Carolina (UNC). “But before the first year was up, I found that it was too much biology. I missed my equations.” So Wayne made the hard decision to leave UNC and move to Ithaca, where she was accepted into a doctoral program in biomedical engineering (BME) with Professor Chris Schaffer as her advisor. “I had to ask myself the questions, ‘what do I really want?’ and ‘what steps can I take to get there?’ Just because you start on a path does not mean you have to stay on that path. That was a hard lesson for me to learn, but a good one.”

Cornell was not an entirely unexpected place for Wayne to choose for her doctoral studies after leaving North Carolina. “Cornell Engineering was the perfect marriage of physics, biology, and optics,” says Wayne. “And I already knew what the campus and the town were like since I had been to Ithaca to visit Bobby.” At the time, Wayne’s fiancé, Bobby Mozia, was a Ph.D. student in the Meinig School of Biomedical Engineering at Cornell. Tragically, Mozia died unexpectedly in 2011, a year after Wayne began her studies at Cornell.

“That was a hard time for me,” says Wayne. “But now, five years later, I am so proud of myself. I finished my Ph.D. while grieving. It was not easy. The department was very supportive.”

Mozia had been actively involved in community outreach as a doctoral student at Cornell; so much so, that after his passing Cornell Engineering’s Diversity Programs in Engineering named the Robert Mozia Graduate Distinguished Service Award in his honor and memory. Fittingly, Wayne won the award in 2013 in recognition of her successful efforts to organize the Northeast Conference for Undergraduate Women in Physics hosted at Cornell that year. “I learned so much from putting on that conference,” says Wayne. “We managed to raise $60,000 to pay for all of the attendees. We hosted more than 170 women from the US and Canada. There were poster sessions and presentations by national labs and grad programs. I learned a lot about how to network, and the women who attended saw that they were not alone.”

Wayne went on to finish her Ph.D. program in 2015. While at Cornell her work (with professor Mike King) focused on a method of killing metastatic cancer cells in the circulatory system before they could begin to grow at a site away from the initial tumor. In her post-doctoral position at the Eshelman School of Pharmacy Wayne is studying ways to deliver genetic material to the tumor environment using a macrophage-mediated non-viral delivery system. If successful, this work could obviate the need for chemotherapy in treating some cancers.

Something that becomes evident after a time spent listening to Liz Wayne tell her story is that she has had to create her own path again and again. “I have learned that if I want something, I have to just keep trying until I have exhausted all options,” says Wayne. “I have to say ‘how can I keep this alive in some way?’ It makes you find resources you did not know were there.”

One resource other girls and women will have that Wayne did not have in high school or college is the podcast known as PhDivas. The podcast is a free-wheeling discussion of academia, culture, and social justice across the STEM/humanities divide. It is hosted by Wayne, (representing the STEM side of the divide), and Cornell English Ph.D. graduate Dr. Christine "Xine" Yao, (representing the Humanities side). Wayne and Yao met when both served as Graduate Residence Fellows (GRF) in the Hans Bethe House at Cornell. As GRFs, both women were responsible for providing undergraduates with mentoring, leadership, academic support, intellectual and social programming, and community-building between undergraduates and faculty across disciplines.

“We had a great rapport,” says Wayne. “I have a quantitative background and Xine has the humanities covered. We used to talk in the dining hall and undergraduates would gather around and join in. Xine was invited to be on a Cornell radio show and I helped her out. It went so well that we thought ‘hey, we should do a podcast,’ and Ph.Divas was born.” Both women have left Cornell, but their boundary-breaking podcast idea has survived, and even thrived. Today, it is available on iTunes and Soundcloud and has a loyal and devoted following that grows month by month.

“Having a space where women can talk about their science and their research really seems to resonate with the audience,” says Wayne. “It inspires me and gives me a new perspective, too. I get to ask questions of people outside of my field—there is so much to gain from talking to people who are academics but in a totally different field from mine.” The podcast is not a strictly dry academic affair, by any means. The hosts and the guests talk about much more than their research. “It is a place where women can merge the person they are outside of the ivory tower with the person who does the research. It helps me think and gather my thoughts and I think it helps other people get a new perspective, too.”

Topics of past shows have included Teaching While Women of Color, Imposter Syndrome, and Sexual Assault; but Wayne and Yao have also turned their attention, insights, and humor to Nicki Minaj, Hillary Clinton, and the value of doing a postdoc. Listeners who have reviewed the PhDivas podcast on iTunes and podbay.fm give it a unanimous five stars. One early convert wrote “PhDivas strikes a great balance between a conversational tone and deep intellectual dive into cultural and scientific topics. Liz and Xine are both smart as whips, and their chemistry is infectious. Watch out! If you’re on the train or in a coffee shop people might think you’re a bit odd as you nod your head, laugh out loud, and smile from ear to ear. My new favorite podcast.”

Another regular listener writes, “I am so thankful that a podcast like PhDivas exists! As a scientist and lit geek, it speaks to many of my interests, and it is so thrilling to see women of color using a platform to speak their minds. I think this is an important service to the academic community, and I hope they keep going!”

Wayne also hopes they keep going. “Doing the podcast with Xine helps me learn about communication and about leadership,” says Wayne. Though she does not say this explicitly, when Wayne talks about PhDivas if feels as if she is reaching back in time to help her sixth-grade self-understand that there are people like her—women of color who like science and want to understand the world—and that the world needs more. That, in fact, things won’t really feel “diverse” until there are so many women of color in the higher reaches of academics that nobody even notices any more.

Wayne recently found out that she has been awarded a TED Fellowship for 2017. The selection recognizes Wayne as a visionary who collaborates across disciplines in an effort to create positive change around the world. “Becoming a TED Fellow was a very affirming moment for me,” says Wayne.  “I believe in the power of ideas to shape the future. I’m incredibly excited and humbled to share my research ideas on the TED stage and with the world.”

It is clear that in her heart, Liz Wayne is still that girl from Mississippi, walking to the library, creating opportunities, and going where she needs to go to learn what she wants to learn.