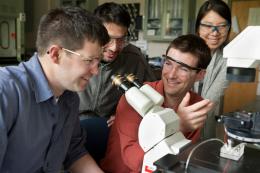 "There are still some big blank spots on the map of what we know with certainty about water,” says Abraham Stroock, associate professor of chemical and biomolecular engineering at Cornell. “We as engineers don’t ever do with water what plants do with water all the time. And that is, we don’t ever use liquid water under negative pressure.” Abe Stroock wants to change this. He wants to take what he learns from plants and use it to develop useful tools for tissue engineering and other chemical processes. “Plants are the living representation of what chemical engineers build,” says Stroock. “They are the most beautiful example. Plants are the vascular system of the biosphere and how they solve engineering problems can inspire and teach us.”

Stroock’s primary motivation seems to grow out of his background as a physics major, (Cornell ’95). “I really like physics for its ability to provide predictive theories,” says Stroock. “Physics forces you to distill your problem down until it is actually solvable.” In this case, the distillation of the problem might be formulated as ‘what are the fundamental properties of water at negative pressure?’ The answers to this question could have far-reaching effects on fields as diverse as plant science and human tissue engineering.

While helping to fill-in some of the unknown parts of the phase diagram for water, Stroock also wants to take what he is learning about the biophysical processes that control vascular development and apply it to the field of tissue engineering. He has worked on growing engineered microvascular networks that grow, interact, and respond to stress like the body’s own blood vessels do. His networks can be used to see how human blood vessels react to chemical stimuli similar to those put out by cancerous tumors. It also allows researchers to study the interactions between blood vessels and the cells that usually surround them in the human body.

In some ways, the workings of the human vascular system are easier to learn about than those of a plant. For all of the information plants could give us about the behavior of liquid water under negative pressure, scientists and engineers have not yet developed the sorts of tools and technologies they will need to get good data from individual plants. “Right now, all we have are blunt tools and methods,” says Stroock. “So far, we are stuck measuring the height of a plant or the crop yield of a particular field but we can’t even do something as basic as take the equivalent of a particular plant’s blood-pressure.”

One reason for this problem is that the moment you introduce an opening in the plant’s vascular system, you introduce enormous artifacts. You have opened a closed system and compromised any measurements you take after that.  Stroock and fruit crop physiologist Alan Lakso believe they have a solution to this measurement problem. They have created a chip that can be embedded in the stem of a grape vine to monitor water pressure inside the plant. Lakso is a viniculturalist at the New York State Agricultural Experiment Station run by Cornell in Geneva, New York. He heard Stroock give a talk on his interest in finding out more about liquid water under negative pressure and he immediately approached Stroock to see if they could combine their interests.

The chip they created has a tiny cavity that is filled with water. The water can move into and out of the cavity through a nanoporous membrane. The chip monitors this movement and measures and records the equilibrium pressure. The chip can send its data wirelessly to a computer. With enough chips, researchers could then combine this data with data from similar chips in the soil to create models of how water moves through the system and how water levels correspond with various qualities of the grapes (or other crops) produced.

Stroock himself sounds a bit surprised that his research has taken him into the hydrology of local vineyards. “I was interested in a purely scientific study of some of the properties of liquid water,” says Stroock. “This may seem like an odd thing for a chemical engineer to do, but like I said, plants have already solved a lot of engineering problems and this chip will allow me to start to see how they have done it. There are some unusual physics that occur in a plant and I want to bring that into my lab and have it inform my work.”

Stroock’s work straddles the fields of plant physiology, physics, chemistry, and biomolecular engineering. “This is one of the primary reasons I was interested in coming to Cornell,” says Stroock. “There is a great tradition here of having these multi-disciplinary centers. Cornell cultivates an atmosphere of collaboration across fields. Also, the quality/ego ratio here is wonderful. People do great work but their heads don’t get too big.”

Abe Stroock says that about half of his work is done in the human context and half is done in the plant context. His engineered microvascular networks and his embedded chip both push the bounds of what is possible and offer hope for improvements in human tissue engineering and in crop monitoring and production. All of his work is done with two goals in mind: furthering human knowledge about the basics of the vascular process, and applying research to make life better.