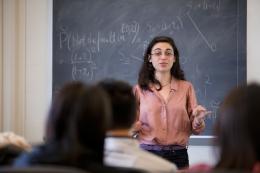 Andreea Minca was working toward her Master’s Degree in Probability and Finance from the Ecole Polytechnique in Paris in 2008 when the global financial crisis was wreaking havoc on financial markets worldwide. “As I was writing my Master’s thesis, Lehman Brothers was collapsing,” says Minca. “People were wondering ‘how will we respond to this?’ When you see the world around you falling apart, you start thinking a lot about how you could rebuild a better system.”

At the time, Minca assumed she would get her Master’s and then go into the financial industry—an industry that was going through the painful process of redefining itself.  Minca herself had a lot of questions about risk and how new regulations could reshape the system for the better. So rather than go straight into a job in the financial sector, she decided to continue her studies and get a Ph.D. in Applied Mathematics from the Paris VI Pierre et Marie Curie University. In an effort to answer some of her questions on what makes a financial system more or less stable, she wrote her doctoral thesis on Mathematical modeling of financial contagion.

That was in 2011, yet Minca still has not taken the industry job she used to assume she was heading for. “I never came to the end of my questions,” says Minca with a smile in her office at Cornell Engineering’s School of Operations Research and Information Engineering (ORIE). “I still have plenty to explore.”

It is not necessarily inevitable that someone studying probability and finance in 2008 would develop a major research interest in modeling how shocks propagate through the financial system, but neither is it a surprise. It is also not surprising at all, at least to Minca herself, that she has ended up in such a math-heavy field as quantitative finance. Minca grew up in Romania. “Romania does not have a problem attracting women to STEM fields,” she says. “In fact, there is a long tradition of very strong math and computer science education in the schools and both boys and girls see STEM careers as a possibility. Competing in Math/CS/Physics Olympiads is quite popular in high school. We focus on problem solving skills.”

The problems Minca wants to solve are complex and require a thorough knowledge of how banks and other financial institutions are connected.  One of her research goals is to build a model of the global banking system that is able to predict the effects on banks as instabilities emerge and spread through the system. If Minca can model this very complex system, that will mean she has managed to identify where much of the risk lies in the system.

It is essential for banks (and regulators) to know what might happen if suddenly the housing market were to collapse, for example. An accurate model can tell them. The model can then be used to help regulators adjust things like the amount of total reserves a bank needs to keep on hand. Risk can be hard for a financial institution to manage, for several reasons. As the banking system has gotten more complex, it is not easy to see how distress in one bank might harm another. Also, the most profitable financial instruments and transactions are also most often the riskiest, so the people within the banks who manage risk have to go against the banks’ highest earners, and that can be a difficult thing to do.
In the wake of the global financial crisis, the United States government formed the Financial Crisis Inquiry Commission, which blamed the meltdown, in part, on “dramatic failures of corporate governance and risk management at many systemically important financial institutions.” It is clear that banks and regulators need to understand the system better in order to better manage the risks.

Another approach Minca is taking to the problem of systemic financial risk is based in the ideas of MIT Sloan School of Management Professor Stephen Ross. Ross has recently published an article in the Journal of Finance called The Recovery Theorem. In the article, Ross argues that one can use public data—option prices—to determine the market’s forecast of returns. Minca is drawn to the idea of using available data about trade instruments to glean what the market believes about the long-term prospects of the financial system.

“It can be very hard to get a clear picture of what traders believe about the future,” says Minca. “Most of the time what they say is clouded by people’s beliefs and attitudes and these can influence market trends and behaviors.” Minca is working to build a model that accounts for beliefs and attitudes in a way that is quantifiable and can guide financial institutions and regulators away from a looming crisis. So, seven years on from the global financial crisis, Minca herself is now one of the people answering the question she asked back in 2008: how do we respond to this?