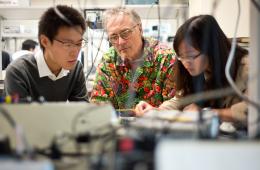 To be successful in the academic world, you often have to pick one research area to specialize in and then devote yourself to that one, narrow area with all your heart and all your effort. In his very successful 40-year career at Cornell Engineering, Bruce Land has chosen to ignore this rule.

Back in the summer of 1968, Land climbed into his ’65 Dodge sedan in Southern California and headed East. He didn’t stop until he was in Ithaca, where he started working toward his Ph.D. with Frank Rosenblatt. Rosenblatt was the inventor of the Perceptron I, which was the first computer device to learn by trial and error, and Land was interested in the idea of artificial intelligence.

When Rosenblatt died tragically at the age of 43 in a boating accident, Land turned his focus to an electrical approach to muscle cell function in Professor Tom Podleski’s lab. As a side project for Professor Ron Hoy he created a cricket call generator using an Intel 4004, which was a 4 bit CPU that was the cutting edge state-of-the-art microprocessor in 1971. It took Land nine long months of sweat and effort to get that cricket call generator to work right. Today, Land’s students complete this very same project in 2 afternoons, “and, they get a higher quality result,” says Land.

Land then worked for the Cornell Theory Center for 12 years, eventually becoming the visualization project leader from 1989 to 1998. Land has also taught an introductory computer graphics course in Computer Science, as well as computer programming and electronics in Neurobiology and Behavior at Cornell.

This zigzagging path, from artificial intelligence to the electronics of muscle cell function, and then on to teaching computer graphics, programming, and electronics and, finally, to a focus on using embedded devices is far from traditional, but it has led Bruce Land to a place he really wants to be.

For the last 17 years Land has been teaching ECE 4760—also known as Designing With Microcontrollers. “It is a capstone design course for seniors and M.Eng. students in Electrical and Computer Engineering. I teach people how to use these microcontrollers and then they go and do amazing things with them,” says Land. At this point in the conversation Land goes on to describe some of the many projects people have created over the years in his class.

But rather than merely read about the projects his students have designed and built, you should go to the Final Projects page of Land’s class website and join the million unique visitors who have checked out some of Land’s many videos. There are more than 100 short videos demonstrating what student groups have created. There is an autonomous fire fighter, an infrared Theremin, a gesture-based lock, a robot goalkeeper, and an automated grapefruit slicer, just to name a few. (Click here to see some of these videos.)

One of the great things about watching the videos is seeing Land interact with his students. They are obviously excited to be showing off what they have made and he is obviously pleased by both their excitement and by the quality of their projects. In several of the videos, after the students have described their project and shown how it works, Land responds with a very-California-like “KEWWWWL!” And, in just about every video, Land is wearing his trademark shorts and colorful print shirt, no matter the weather or the season. This may go to show that you can take the boy out of Southern California, but you cannot take the Southern California out of the boy.

When asked how long he would like to go on teaching ECE 4760, Land pauses for a bit. “I’ll be 68 in a few days,” he says, “and recently I talked with the department and I told them I can do this for a few more years because it is something I really love. Then I will have to reevaluate when I hit 70.” It is hard to imagine Bruce Land NOT teaching young engineers, and at first, it seems hard for even him to imagine it. But then he says. “If I were to retire, I would spend a lot more time in the forest. There is an indefinite amount of work to do to keep my place up.”

One piece of advice Land gives his students is that you have to be an engineer AND something else. “You have to have some personal interest outside of engineering. It’s the ‘and something else’ part that can really make it exciting,” says Land. “And often that ‘and something else’ can combine with your engineering for some really great projects.” Land goes on to prove this very point when he talks about being a beekeeper. “Last winter was hard on my hives. We had a weak hive and a strong hive with lots of honey and we lost them both.” His response was to work with a student to build a honeybee hive monitor. It has three temperature probes and a sound detector and it combines his engineering with his ‘something else.’

The other obvious ‘something else’ Land has, (in addition to his engineering and his forest and his bees), is his love of teaching. In his years at Cornell, Land has won teaching awards 10 times. “I just get so excited when I see these students learn how to do this stuff,” says Land. “Truthfully, people do most of their learning in the lab, not in the lectures—and I get to be there for that.” Turns out, Bruce Land did indeed pick one thing to devote himself to after all—only it wasn’t a program of research. It was his students.