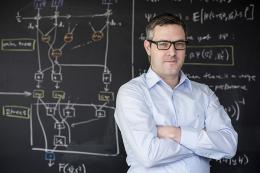 The people who write the algorithms that process the massive amounts of information passing through wireless communications systems are not usually the same people who develop the digital integrated circuits that run the algorithms. Christoph Studer says this is a problem.

“Typically, researchers who work on the circuit side have to wait until the theory and algorithms are mature and well-understood before they can implement them in hardware. If you take an algorithm that processes information and you simply try to implement it in hardware, it usually doesn’t produce good results, uses too much power, or is too slow,” he explains. “You need to know the constraints on the circuit side and understand the theory behind the algorithm. Our past research has shown that the best solutions can be obtained by jointly optimizing algorithms and circuits.”

Studer,  who is an assistant professor of electrical and computer engineering at Cornell University, believes the most exciting and interesting research problems come from working in multiple disciplines. He uses a unique interdisciplinary research approach to develop new, computationally efficient information processing algorithms, study their theoretical properties, and develop corresponding digital integrated circuits. With this approach, he bridges the ever-growing gap between theory, algorithms, and integrated circuits in modern semiconductor technologies, all of which are growing in vastly different directions.

According to Studer, researchers tend to work in a single area—theory, algorithms, or circuit design. As a result, hardware designers usually take whatever algorithms are out there and try to make the best of them. “In most cases,” says Studer, “the best approach is to ignore the state-of-the-art and design an entirely new algorithm that is a perfect fit for hardware implementations.”

Studer and his Ph.D. students are doing thing differently and using this multidisciplinary research approach in the field of wireless communications. If you send data through the air—for example, an email or a video—the base station must estimate what you have sent. Transmission errors will occur because buildings obstruct wireless signals, other users are also transmitting data, and real hardware circuits are noisy. Such errors require retransmissions that slow down your connection. To maximize the data rates, the base station must use sophisticated estimation algorithms that minimize these errors.

In future wireless systems, tens of users will send their data to a base station having hundreds of antennas. “That’s going to be the future,” says Studer. “But the base station has to somehow untangle and estimate the data all these users have transmitted. The more users there are, the harder the estimation problem gets. The complexity of the best-known algorithm grows exponentially in the number of users, and this method cannot be implemented in hardware. So we’ve developed a new algorithm that allows us to make estimation at very low complexity while achieving near-optimal performance.”

By borrowing ideas from statistical physics, Studer and his team have developed a novel algorithm that works extremely well in such multi-user wireless systems. Together with his two Ph.D. students, he is now designing a digital chip to show that the algorithm indeed works in practice and enables reliable transmission at unprecedented data rates.

According to Studer, when researchers design algorithms, they often assume that everything with the hardware is perfect. When it comes to real systems, however, there are hardware imperfections that distort the signals of interest. As a consequence, most algorithms do not work as expected. Similarly, theoretical results often rely on models that ignore such hardware imperfections entirely. Again, in practice, theoretical results often turn out to be inaccurate and hence, useless.

By jointly considering theory, algorithms, and circuit design, Studer has been able to mitigate the problems and imperfections found in real hardware. As a result, his team comes up with solutions that not only work on paper, but also function well in practice. Furthermore, by working in all these areas simultaneously, they can implement their results immediately.

Though it can be demanding, Studer emphasizes not only the importance of broadening one’s skill set but also looking at things in detail. “There’s a growing number of researchers who cover multiple areas, but many of them only do research at a high level,’ he says. “My group really tries to also focus on the details. But of course, you can only do this for select problems.”

“If someone is willing to learn another field, they should also learn the applications and theoretical foundations,” he continues. “But I also think researchers should broaden their horizons. Whenever I learn something new in one field, in many cases I can transfer the same technique to another field. This interdisciplinary approach not only gives us an advantage over other researchers in academia and industry, but is also the most fun part of my work.”