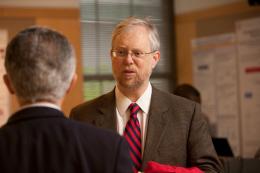 More and more, when researchers need a material that exhibits a suite of very specific characteristics and behaviors, rather than searching for something that fits the bill they instead create the material. But creating these novel materials is not as simple as pulling a few ingredients off the shelf, mixing them together, and waiting until they are “done.” Rather, it takes a multidisciplinary team, state-of-the-art facilities and methods, and advanced characterization tools. It also takes a bit of luck.

Chris Ober, who is the Francis Norwood Bard Professor of Materials Engineering in the Department of Materials Science and Engineering at Cornell, has all of the necessary ingredients on hand here at Cornell. As a result, he is doing work at the very edges of what is possible in the field of materials science. Ober, who has been teaching at Cornell Engineering since 1986, uses polymers to create materials for use in flexible electronics, biological sensors, and photoresists, which are used to create nanometer scale structures.

It is fitting that Ober and others are doing this sort of work at Cornell. In the 1940s Professor Clyde Mason from Cornell’s School of Chemical Engineering published the Handbook of Chemical Microscopy, one of the first chemistry handbooks to focus on the idea that the properties of a material are related to and controlled by its structure.

Ober grew up in Ontario, Canada and his father was a professor of English Literature, specializing in the Lake District poets of England. When he first received his Master’s and Ph.D. in polymer science and engineering from the University of Massachusetts-Amherst, Ober went to work at the Xerox Research Centre of Canada. He worked there for four years and eventually became frustrated with the narrow range of topics he was assigned to work on. Says Ober, “While there, I learned more and more about less and less.”

Ober decided he would leave Xerox and find a faculty position at a university. “In industry you do not have a lot of freedom to follow your interests. Instead, you must follow your company’s competencies,” says Ober. “In academia you are more free to follow your interests down various research avenues. As a professor I am free to think about all areas of materials science.” Having grown up in Ontario and then spent four years working for Xerox-Canada, Ober did not have much insight into the American academic universe.

While chatting in his office in Cornell’s Bard Hall, Ober admits a bit sheepishly that in 1986 as he was applying for academic openings he did not know Cornell was in the Ivy League, but he knew that Ken Dryden, the great hockey player, had studied here. His lack of awareness about the Ivy League did not get in the way of Cornell offering Ober a job. “I was comfortable at Cornell right away,” says Ober. “Within the Department of Materials Science and Engineering there are many areas of expertise represented and collaboration happens all the time. Because of the freedom and the quality of peers, I can do much better work. In fact, the best work I have ever done is the work I am doing today. This makes it easy to show up for work every day.”

Ober and his collaborators work mainly with polymers. “Polymers, more than any other material, offer the possibility to fine-tune their mechanical, thermal, optical, and electrical properties,” says Ober. “By tailoring the chemical structure of materials, we can control their properties to an exquisite degree.” In order to see just what it is he is creating, Ober uses the many state-of-the-art processing and characterization tools available at Cornell, including the Cornell Nanofabrication Facility and the x-ray diffraction and scattering facilities housed at the Cornell High Energy Synchrotron Source (CHESS).

In his remarkably productive career at Cornell, Ober has developed a new glue to join computer components together. The glue melts at 221 degrees Celsius, which allows parts to be separated and reused rather than trashed. He has also invented a new method of lithography that will be valuable in the creation of flexible electronics. He invented, along with Cornell professor Emmanuel Giannelis, a nanoparticle photoresist that is proving to be an excellent candidate for the new material that will help computer chip producers keep Moore’s Law alive. And he has worked with Cornell Chemistry Professor Barbara Baird to develop a new sort of sensor to detect the presence of antibodies in small samples quickly and easily.

For these and many other innovations, Ober was recently recognized by the Society of Photopolymer Science and Technology (SPST) with their Outstanding Achievement Award for 2015. He is also a member of the inaugural class of Fellows in the American Chemical Society. When talking about his career at Cornell, (thus far), Ober does not even mention these awards. Instead he focusses on the fact that he has advised 50 Ph.D. students so far. “Cornell attracts amazing students,” says Ober. “Their success is my proudest accomplishment.”