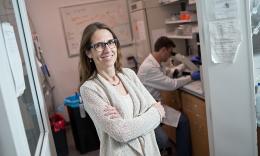 Breaking down barriers to learn more about cancer

There is a growing awareness among researchers that petri dish studies of cancer cells are not enough. Cancers exist in living tissue inside living creatures. In order to understand cancers better, researchers must figure out how to study cancer cells in settings that better mimic their physiological context. Claudia Fischbach, associate professor of biomedical engineering at Cornell, is doing just that in her lab in Ithaca, N.Y.

“The conventional biological idea is that cancer is a genetic condition. But people are realizing that other factors may be similarly important,” says Fischbach. “For example, the properties of the tissues surrounding abnormal cells influence whether the disease develops and progresses or not.” In her work, Fischbach is using engineering approaches to study the interplay between tumors and their microenvironment.

To mimic normal and perturbed tissue microenvironments that may influence cancer development and progression, Fischbach has developed 3-D biomaterials platforms. These platforms incorporate cells and can be readily adjusted to mimic conditions that, for example, influence breast and brain cancer. Ultimately, her goal will be to engineer a laboratory model that fully captures the different stages of cancer including their initial development, growth, and ultimately distribution to other sites in the body in a process termed metastasis. Fischbach hopes findings from such studies will help change the way patients are diagnosed and treated in the clinic.

“There are therapies out there whose promise has not been fully met yet,” says Fischbach. “Looking only at the genetic changes in a patient’s cells without considering the biological and physical context in which they exist may be the reason.” She hopes her work will lead to the discovery of new biomarkers that can be detected with something as simple as a blood test to give doctors information about what is going on in a tumor, though a test like this is likely still years away.

Fischbach has not always studied cancer. She received her Master’s Degree in Pharmacy from Ludwig Maximilians University in Munich, Germany in 1998, and her Ph.D. in Pharmaceutical Technology from the University of Regensburg, Germany in 2003. Fischbach then did postdoctoral work at Harvard University’s School of Engineering and Applied Sciences in David Mooney’s Laboratory for Cell and Tissue Engineering. “Dave was a great mentor for me,” says Fischbach.

It was during her time at Harvard that Fischbach attended a cancer biology conference focused on tumor microenvironment interactions. It was 2005 and Fischbach says that that meeting significantly impacted her research interests. “Back then I realized that Tissue Engineering, a field originally developed to design organs and tissue for replacement therapies, offers unique tools and strategies to mimic the biological and physical characteristics of our body that may influence cancer”.

Fischbach came to Cornell in 2007 and she has been doing her research into cancer ever since. “Cornell is special because of how collaborative it is,’ says Fischbach. “The people here are extremely friendly, the students are excellent, the facilities are world-class, and there are nearly limitless opportunities for interdisciplinary work.”

In addition to her work in the lab, Fischbach is also a vocal advocate for greater collaboration between cancer biologists and engineers. She recently published an opinion piece in the online magazine Pacific Standard in which she stated, “Most cancer labs have ignored the physical context in which cancer cells develop because analyzing and recreating the physical properties of tumors is difficult and requires expertise cancer biologists do not have.”

Rather than cancer biologists learning the skills themselves, Fischbach argues there is a large contingent of researchers who already have the expertise— for example, biomedical, chemical, or mechanical engineers. She ends her essay with a metaphorical call to arms: “The past four decades have taught us that cancer will not go down without a fight. To beat it, we need to be nimble, resourceful, and creative. Teamwork between biological and physical sciences is essential. If we fail to recognize that, victory may elude us far longer than we hope.”