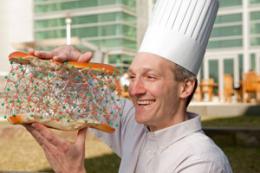 "When you are an engineer, scientific principles that you learn and apply make you speak up. If you see that some analysis is wrong, you say so.  And it's not to be obnoxious.  It is because the science said so and it becomes a gut reaction. This is the way scientists interact and progress is made."  Nowadays, Darrell Schlom is in the middle of a long and productive career as a materials scientist, but back in 1998 he was an untenured junior faculty at Penn State, just getting his lab up and running.  A senior professor had been invited to a conference, but passed his invitation on to Schlom. The conference had been organized by Sematech, a chip-maker research consortium, and Schlom was not particularly interested in going.

"But when a senior faculty member asks you to do something and you are untenured, you pretty much do it." So, Schlom agreed.

The conference had been called by Sematech to address the problem of electron leakage. As problems go, electron leakage may not be very high on your list. But to a microprocessor manufacturer, electron leakage is a big deal. As computer chips got smaller and smaller from the 1960s through the 1990s, they followed what became known as Moore's Law, which predicted that the density of transistors on computer chips would double roughly every two years.

In 1997, Intel, IBM, Hewlett-Packard, and the other members of Sematech sent out an SOS to the research world warning that they were approaching a natural end to Moore's Law if the problem of electron leakage could not be solved. To fit more and more transistors on a chip through the 60s, 70s, 80s and 90s, the transistors has shrunk in all directions, including the thickness of the insulating layer of silicon dioxide. The chip manufacturers predicted that if the layer got any thinner, the torrent of electrons leaking through would drain too much power and create too much heat for devices to be effective. They needed help and they were asking the community of researchers to put their minds to the problem.

Darrell Schlom did not know much about the production of computer microprocessors, but he did know a heck of a lot about a class of materials called oxides. He prepared for the conference by reading up on what the other conference attendees were going to present. He also saw a list of materials the consortium of chip-makers was recommending as possible replacements for silicon dioxide as the insulating layer on chips. All of the materials on the list were oxides.

The reason Schlom knew so much about oxides can be traced back directly to basic scientific curiosity. In 1992 he was in his first year as a professor at Penn State and he did not yet have a lab to work in. He knew that once he had a lab up and running he was going to want to layer various oxides onto silicon. These sorts of materials had all sorts of interesting and useful properties.  But, they could not work very well if the oxide reacted with the silicon it was layered on.  A reaction between the silicon and the oxide would interfere with the properties and performance of both materials.

Without a lab to test materials, Schlom and an undergraduate student went back to the books.  Specifically, to an enormous desk reference work listing a number called the Gibbs Free Energy value of every element  in the periodic table, as well as that of every known oxide. Using the Gibbs Free Energy values, you can determine if they will react with each other under certain conditions of temperature and pressure. Schlom and his student, Kevin James Hubbard, tabulated and published tables of reactivity for a large number of oxides with silicon. Their work was the basis for Hubbard's senior thesis in 1993 and an academic paper published in 1996.

Because of his intimate familiarity with oxides and their reactivity with silicon, Schlom knew that all of the replacements recommended for further research by the chip makers would not work.  He knew because the science told him so.  He had already done (and published) the math.  When he presented his work at the conference, there were some perturbed scientists in the audience. Their research, (and their funding), was based on those now-discredited possibilities. In his presentation, Schlom did not simply eliminate the list of possibilities.  He also added a few compounds that he knew (mathematically, anyway) would work to insulate microprocessors in very thin layers without leaking electrons.

Along with some discomfited researchers, also in the audience was Baylor Triplett, from Intel.  He immediately understood the repercussions of Schlom's work and invited Schlom to join in the consortium-financed efforts to find a replacement for silicon dioxide. Schlom's career blossomed from there and brought him to Cornell, where he has found a welcoming home for his interest in studying scientific fundamentals and asking the important question: "How can we do things better?" The materials Schlom identified as promising possibilities for the next generation of chip insulation did in fact work out and Moore's Law has continued to hold true, for now.

Schlom, now a tenured professor with eight patents and the recipient of numerous awards, is still doing research into topics of fundamental interest.  As part of a multidisciplinary team, he is creating new oxides with unprecedented properties relevant to a host of applications. Schlom is still following his curiosity and going where the science leads him, just like he did in 1998 when he helped redefine the field of microprocessor technology.