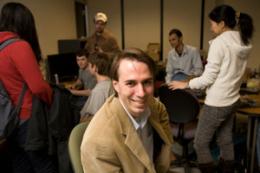 David Schneider says that people have often seen him as a bit of a loose cannon and a rule-breaker, but he thinks they are seeing only part of the picture. "I always shoot for a target that is galaxies away, BUT I build-in measureable milestones, and my first goal is always that the students are learning." Schneider has followed an unconventional path to his position as a lecturer in Cornell System Engineering, including stints at NASA and working as a screenwriter for Disney. He has visionary ideas about how best to teach engineers the art of design. He also has supreme confidence in these ideas and a willingness to work hard to implement them. "Give me enough rope and I will hang myself or I'll do something amazing. Either way, you'll know what to do with me."  Cornell heard some of Schneider's ideas and agreed to give him as much rope as he needs.

One of Schneider's big ideas was to create a competition for engineers that would reward creative and innovative problem-solving. Thanks in part to Intel CTO Justin Rattner, Schneider was invited to make a pitch to Intel and he wowed them with his idea for the "Cornell Cup USA Presented by Intel" competition. Many engineering competitions present all teams with one challenge and then judge the various solutions to the problem against each other. Schneider's idea for the Cornell Cup is revolutionary. He asks teams to first identify the problem they are trying to solve. Then they create an embedded systems solution to that problem using an Intel Atom microprocessor. Furthermore, teams develop a set of metrics whereby any solution to that particular problem could be judged.

"So many of these high level engineering competitions present student teams with the same problem year after year," says Schneider. "The students can learn how to get really good at solving that one problem. But that is not what we wanted for Cornell Cup. We really wanted to up the educational value of the competition."  Schneider set out to create a competition with concrete learning objectives, an emphasis on innovation, low barriers to entry, real return value to the universities that send teams, and a chance to make a real difference in people's lives.

By all accounts he has succeeded wildly. In its first two years student teams from all over the country have come to the competition with creative and innovative solutions to real problems faced by real people. One team has created a cheap and effective way to fill in the "holes" in cell phone coverage. Another has invented a device to quickly identify unknown pills in the emergency room setting where valuable time is often wasted trying to find out what medications someone has swallowed. The winner of the most recent Cornell Cup USA invented a powered upper body exoskeleton to help with rehabilitation of injuries and in fields requiring augmented strength. Participants in last year's Cornell Cup said, "Every engineer should go through this experience," and "This was the most magical experience of my life."

Comments like these are music to Schneider's ears. "In life, there are no problems, just opportunities to do things differently. The whole reason I got my Ph.D. was because I wanted to do engineering education. With Cornell Cup I get to give engineers an experience where they can define a problem, design a solution, and then right away see how they could make it better."  Schneider says he loves to work with students because "they don't know the rules yet. They don't know some things can't be done, so they just go out and do them."

This year, the Cornell Cup USA presented by Intel competition will include a special Entrepreneurship Award with a prize of $2500. Teams will be invited to create an abbreviated business plan about their Cup entry and then given an opportunity to pitch their plan to venture capitalists. This is all part of Schneider's vision for what engineers can do. Rather than simply creating technology based on someone else's specifications, teams in the Cornell Cup competition can take a new technology from the idea stage all the way to the market.

In addition to his role as leader of the Cornell Cup competition, Schneider is also the faculty advisor to Cornell's most popular student project team, Cornell University Sustainable Design (CUSD). This group has over 200 student members representing more than 25 different majors. It includes dozens of faculty and staff and has developed a national reputation for cutting-edge work in the field of sustainable building design. They have worked as a collaborative, multi-disciplinary team to look at all aspects of construction and housing to see where there is room in the process to make things more efficient and more sustainable. Their work has been recognized by the United States Green Building Council, the Clinton Global Initiative, and former United States Secretary of Energy Steven Chu.

Engineers are not always seen as the most creative group of people. Through Cornell Cup USA presented by Intel and his work with CUSD, Schneider is working to change this perception. He feels especially passionate about teaching engineers the fundamentals of design. He believes that once engineering students start to take a Systems approach and see design as part of what they do, they can break through the boundaries of what is possible and create new and better ways to do things. "I want Cornell Engineers to think about things in new and creative ways. I want them to break the usual engineering rules not simply to break the rules, but in service of making the world better."

(Click here to see a highlight video of the 2014 Cornell Cup USA presented by Intel.)