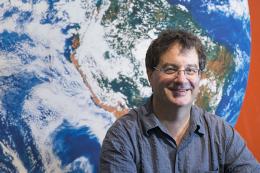 Seeing the invisible to better understand volcanoes and earthquakes

The goal of Geoff Abers’ research is to see what cannot be seen. In much the same way that doctors use magnetic resonance imaging (MRI) to image the soft tissues, organs, and bones of the human body without cutting open a patient, Abers uses the tools of earthquake seismology to image the crust and the mantle of the Earth. While doctors are often trying to diagnose a specific problem in a specific patient, Abers is more interested in better understanding the basic material and fluid cycles of the entire planet.

Abers, who is a professor in the Department of Earth and Atmospheric Sciences (EAS) at Cornell, grew up in Southern California. He was not always interested in what was happening 50 miles below the surface of the Earth. In fact, he did not take his first geology class until he was a junior at Brown University.  By the end of that year Abers had declared his major in geological sciences.  Abers’ first post-Brown position was working in a lab at Woods Hole Oceanographic Institute. “That job,” says Abers, “gave me some focus and helped me figure out that I wanted to go on and get a Ph.D.”

Abers worked at Woods Hole for a year and then began his Ph.D. studies at MIT. It was the mid-1980s and the broad outlines of plate tectonics were generally accepted by the scientific community, but the global principles were not yet established. Abers focused on island arcs and subduction zones and wrote his thesis on the tectonics of the New Guinea region.

The broad strokes of what is taking place at subduction zones are now well known. Volcanic island arcs form where one tectonic plate slides beneath another. As the subducting plate dives below the overriding plate, it heats and releases water, which triggers melting in the hot mantle above it. The melted material then somehow rises to the surface. At the surface, volcanic islands form. Shallower along the boundary between the subducting and overriding plates, there is a deep oceanic trench and a large fault. Earth’s strongest earthquakes traditionally occur at these boundaries.

Abers would like to take the field beyond the broad strokes and develop a much more detailed picture. Between when Abers wrote his doctoral thesis in the late 1980s and today, the computing power available to researchers has increased exponentially. “Of the tools we have for looking into the Earth, the ones used by earthquake seismologists are still the best, “ says Abers. “We collect data all the time from hundreds of sites. Part of the challenge is learning how to best use all of that data.”

Between his year at Woods Hole and his arrival at Cornell in 2014, Abers earned his doctorate from MIT and held research or faculty positions at Lamont-Doherty Earth Observatory, the University of Kansas, and Boston University. Abers came to Cornell for several reasons. “I have known senior people here my entire professional life,” says Abers. “People here think about the same sorts of questions I am interested in. This is a strong department with excellent new people coming in, too. There is a lot of opportunity here to have a big impact with the work I do.” Also, he points out that “Cornell is unusual in that Earth Sciences sits within an Engineering college. This makes easier all sorts of opportunities for interaction and collaboration that could advance the science in practical, relevant directions.”

The work Abers is currently most excited about is enabled by a dense array of hundreds of broadband seismographs both on the sea floor and on the land where the Pacific Plate is being subducted under the North American Plate. This subduction zone was the site of the most powerful earthquake in North American history in 1964. The Aleutian Island chain just north of the associated trench is a picture-perfect example of a volcanic island arc arising from a subduction zone.

“Earthquakes and volcanoes are driven by deep Earth processes that are hard to see,” says Abers. “Having an array of hundreds of sensors can help give us a clearer picture of the deeper plumbing of these subduction zones.” The Earth, in one sense, is a giant recycler of material. One place where this recycling is most obvious is at the plate boundary where one plate—along with ocean water—is diving beneath another plate. Exactly what happens to the subducting materials and the path they then take through the recycling process is something Geoff Abers wants to understand.

In probing these impossible-to-see parts of the Earth’s interior, Abers hopes to see where and how fluids and magma are forming and moving deep below the surface. Just as developing a thorough understanding of the human circulatory system has helped doctors predict and fight disease, developing a clearer picture of the Earth’s circulatory system will help geophysicists understand the conditions that lead to earthquakes volcanic eruptions.