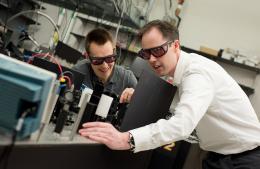 Greg Fuchs has found a way to make electrons do just what he wants them to do, (within reason, of course). Other researchers in other places have managed to exert control over electrons before, but very few have done so using the tool Fuchs and his team used: sound waves. In the specialized field of diamond spin control research, his group is the first to accomplish the feat.

“One of the exciting things about controlling electron spins mechanically,” says Fuchs, “is that it helps us understand how a quantum system can interact with something we normally think about as non-quantum. Fuchs’ work at Cornell could have a large role to play in future quantum information processors, magnetic field sensors, and inertial motion sensors. But for now the thrill of this line of research for Fuchs comes from playing a part in advancing our fundamental understanding of spin physics.

Fuchs, assistant professor and a Rebecca Q. and James C. Morgan Sesquicentennial Faculty Fellow at Cornell’s Department of Applied and Engineering Physics, has not spent all of his adult years as a researcher at a world class school of engineering. Before getting his masters and his doctorate in applied physics from Cornell, Fuchs was a high school science teacher. “But then I had the chance to participate in a summer lab experience at the University of Minnesota and it reminded me of how much I love doing research,” says Fuchs during a recent conversation in his Clark Hall office. “But you can’t just turn your career on a dime, so I continued teaching one more year as I took the GRE, got recommendation letters organized, got my transcripts together, and applied to schools.”

Fuchs was accepted at several schools and then visited them one by one. “Cornell was the last place I visited,” says Fuchs. “The Cornell Nanoscale Science and Technology Facility (CNF) and other facilities just blew me away. I knew as I walked around and met people that I could cross all the other places off my list. Cornell is a great institution.” After earning his Ph.D. from Cornell in 2007, Fuchs was a postdoctoral associate at the University of California, Santa Barbara for four years. He then came to Cornell in 2011 and joined the faculty of the School of Applied and Engineering Physics.

Impressive as this record of awards may sound, Fuchs himself plays down the honor. “These Young Investigator-type awards are based on proposals, not on a track record of independent results,” says Fuchs. “Of course, I am happy to get them because they support my research, but they don’t mean as much if I don’t come through with some results.”

Coming through with results does not seem to be a problem for Fuchs. His work on controlling electron spins mechanically has had a ripple effect on the research community already. “It is interesting that we can control spins, (a magnetic system), with something non-magnetic,” says Fuchs. “Many other research groups are now taking this idea and running with it.” Fuchs has also managed to integrate some of what he learned about optics during his post doc in Santa Barbara into his work at Cornell. “The spintronics group here (at Cornell) is already strong,” says Fuchs. “It didn’t make sense for me to come here and join the group if I didn’t bring something new.”

The addition of a deep familiarity with optics to the strong foundation of the spintronics group is leading to new ways to probe magnetization with nanoscale spatial resolution and picosecond time resolution. “This is exciting to me because it is hugely interesting fundamental science and at the same time it has some immediate practical applications,” says Fuchs. Developing a better understanding of the dynamics of magnetization at the nanoscale will have an effect anywhere hard drives or other magnetic memory devices are used. By learning more about magnetic behavior in nanoscale materials Fuchs and his collaborators are building the foundation upon which the next generation of computers and other advanced electronics devices will work.