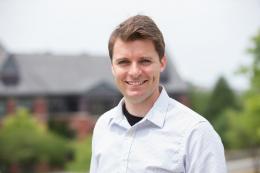 While Guillaume Lambert was studying for his B.S. in Physics at McGill University in Montreal he had a summer job that gave him his first opportunity to do some actual applied physics work. “I remember thinking ‘this is so cool—I want to do this.’ I felt like a fish in water.” says Lambert. “One of my professors (Guillaume Gervais) saw potential in me and encouraged me to apply to grad school in Physics.” Lambert followed his advice and joined the lab of Professor Robert Austin at Princeton.

“Bob Austin is a real innovator with a reputation for pushing boundaries,” says Lambert during a conversation in Cornell’s Clark Hall. “He is a pioneer of biophysics and one of the first researchers to study DNA as a physical object. He helped me see the importance of simply diving in and doing experiments.” After earning his Ph.D. from Princeton, Lambert spent a formative year as a postdoctoral researcher in the lab of biophysicist Edo Kussell at NYU. He then went to the University of Chicago where he was a Chicago Fellow in Biology. Immediately before joining the faculty at Cornell’s School of Applied and Engineering Physics (AEP), Lambert was a visiting scholar at Harvard’s Wyss Institute.

Lambert grew up on a family-owned dairy farm in Sainte-Agathe, Quebec, Canada. His father had a passion for science that took hold in Lambert, as well. “I liked school,” says Lambert. “I have always been curious and had a drive to discover. I was attracted to physics before I really even knew what physics was.” With each step in his education as a physicist, it became increasingly clear to Lambert that he was not going to be a theoretical physicist. “Of course, you have to study interesting problems,” says Lambert, “but for me the answers to those problems also have to have a positive impact on people. Rather than probing the unknown to find new things, I prefer to start with what has just been discovered and create new applications.”

Lambert’s work at Cornell continues his interdisciplinary research combining physics and quantitative biology. Many complex behaviors in bacteria grow out of the genetic variability present from cell to cell. Rather than study what happens to billions of bacteria cells in a test tube when they are exposed to a certain antibiotic, Lambert uses microfluidic devices to look at a few hundred bacteria cells at a time. “Instead of learning a small amount of information about billions of cells,” says Lambert, “I can learn a lot of information about a small number of specific cells.”

Lambert, who is a Gordon Lankton Sesquicentennial Faculty Fellow in AEP, is able to track the lineage of bacteria cells that manage to survive repeated exposure to antibiotics. He can then reconstruct the selective forces that acted on the cells and ask what it was that made that one cell special and allowed it to survive. In this way, he can begin to better understand how antibiotic resistance emerges.

Another thread of Lambert’s research is in the nascent field of synthetic biology. Lambert is interested in the development and characterization of synthetic biological regulatory elements to guide the creation of biological circuits in cells and other active living systems. Simply put, synthetic biologists want to use DNA and RNA to create living systems with specific tasks to perform. While at the Wyss Institute, Lambert was part of a collaborative effort that used synthetic biology to develop a rapid and low-cost diagnostic test for the Zika virus. The ultimate goal of my research, says Lambert, would be to learn from beneficial microbes all around us to create biological devices that can help diagnose and treat diseases at the microscopic scale.

Not only does Lambert himself combine the fields of applied physics and bioengineering, he is asking students in his lab to do the same. “Right now I have one student in my lab who is from Applied and Engineering Physics. He is learning how to grow cultures. I have another student from Biomedical Engineering and she is learning the physics behind what we are observing.” Lambert has enjoyed the process of moving from student to post doc to professor. “This transition has been good. As a post doc I did mostly research; now, I still have my research but I also have 17 freshman advisees and I have an Intro. To Nanoscience class to prepare for the Spring semester.” Lambert seems to have gotten his wish: he is studying interesting problems and at the same time having a positive impact on people.