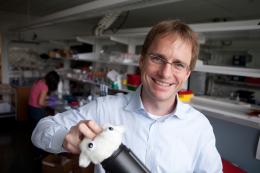 Breaking rules to collaborate across disciplines and fight disease

There is a growing awareness among biologists that the mechanical context of a cell determines some of its function. As a result of this awareness, many biologists are now looking outside of traditional biology and starting to focus on the mechanics and physics of cells. To do this, they are forging fruitful research relationships with engineers.  Nowhere is this boundary-breaking collaboration more apparent than at Cornell’s Department of Biomedical Engineering. This trend in the field of biological research has made Cornell’s Jan Lammerding a very happy man.

“There was a point in my academic career where I had to decide whether I wanted to bring biology into engineering,” says Lammerding, “or whether I wanted to bring engineering into biology. I decided to bring engineering into the study of biology, and that is what I am still doing today.” Lammerding, whose academic and work experiences place him squarely at the nexus of biology and engineering, now has a thriving program of research focused on subcellular mechanics and how cells respond to mechanical stimulation such as stretching or squeezing.

Lammerding, who is an associate professor at Cornell’s Department of Biomedical Engineering, earned his Diplom-Ingenieur in mechanical engineering from the Rheinisch-Westfalische Technische Hochschule at Aachen University in Germany in 1999. He received his Ph.D. in biological engineering from MIT in 2004. Lammerding then joined the faculty of the Department of Medicine at Harvard Medical School/Brigham and Women’s Hospital, where he was a researcher for six years.

“As a bachelor and masters student I was looking at biomechanics on the macro scale,” says Lammerding. “I studied the effect of mechanical stress on bone formation and density and heart tissue. As a Ph.D. student and subsequently as a faculty member I got into a smaller scale. I began to study cells and molecules, since this is where the ultimate decisions are being made.” At Cornell, Lammerding has been using microfabrication techniques, live cell microscopy, and molecular biology approaches to see how normal and diseased cells respond to mechanical forces. He is particularly focused on evaluating the effect of mutations that cause muscular dystrophy and heart disease, and comparing how cancer cells differ from non-cancerous cells in their response to stretching and squeezing.

Lammerding, who also taught at MIT during his time at Brigham and Women’s Hospital, came to Cornell in 2011. “I was teaching at MIT and doing research at Brigham and Women’s Hospital/Harvard Medical School and then Cornell had a position where I could do both,” says Lammerding, “so I jumped at the chance.” Lammerding has a joint appointment at Cornell with the Weill Institute for Cell and Molecular Biology and the Department of Biomedical Engineering. “Something that sold me on Cornell was how collaborative it is,” says Lammerding. “People here are excited about their research and actively look for ways to share their expertise with colleagues.”

In his own research, Lammerding is combining engineering and cell and molecular biology to help build a greater understanding of how the mechanical properties of a cell and its environment contribute to metastasis of cancer cells. “We are trying to answer the question: how does a cell know it is getting mechanically stimulated, for example, during exercise, or in the beating heart, and then adapt appropriately? And what goes wrong in the case of disease?,” says Lammerding. “At this stage, we are gathering facts and building the knowledge that might someday lead to effective treatments.”  Lammerding and his lab have developed novel microfluidic devices in order to study cell migration in confined 3-D environments. They have found that when a cell forces its way through a very tight space, the nucleus can suffer damage or even rupture.

Knowing the various factors that affect whether a cell can migrate through a constriction (and survive the trip) will provide researchers and clinicians with very important information as they build a more complete picture of how various cancers spread. Lammerding’s research will also provide valuable insights into the mechanisms underlying cellular damage in people suffering from muscular dystrophy and heart disease. “The cells of people with muscular dystrophy are more fragile,” says Lammerding. “Also, they are defective in their response and adaptation to mechanical stress and in their ability to repair themselves.”

In addition to building the basic knowledge of how cells respond to mechanical stimulation, Lammerding hopes that a long term effect of his research will be a greater appreciation of the role of mechanical factors in biological processes. “Recent research in my lab and elsewhere provides compelling evidence that the physical properties of the nucleus are critical for many cellular functions, including in the immune system and during development,” says Lammerding. “I am bringing engineering into biology to try to get at some fundamental facts about how cells move through and respond to their environments.”