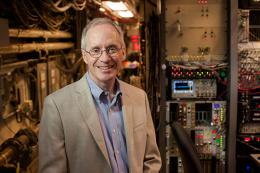 Using x-rays to understand the world

In the late 1970s Joel Brock was an undergraduate student at Stanford University, studying physics. In that same year, Cornell University was building the Cornell High-Energy Synchrotron Source (CHESS). An electron used by CHESS could travel the 2820 miles between Palo Alto and Ithaca in less than a second. This same trip took Joel Brock ten years.

It took ten years because from Stanford, Brock went first to Tektronix, Inc. for a two-year stint in industrial Research and Development, then to the Massachusetts Institute of Technology (MIT) for his Ph.D. and two years as a post-doctoral research associate. He finally made it to Cornell in 1989, when he joined the faculty of the School of Applied and Engineering Physics. By that time, CHESS was up and running and building a reputation as a world-class research facility. When Brock started at Cornell, he immediately made CHESS an essential part of what he does.

What he does, is grow super-thin materials using the Pulsed Laser Deposition method. Many people agree that the electronic devices of the future will succeed to the extent that manufacturers are able to produce thin films with precisely controlled chemical composition. Brock uses CHESS to test proposed growth models that come out of the Cornell Center for Materials Research (CCMR). Brock and his colleagues vary the substrate temperature, the background gas pressure, the laser pulse rate, and the energy density of the laser pulse each time they create a new film. They use CHESS to get a close look at what is going on while the film is growing. Their end goal is to gather the knowledge and expertise that will allow them to create thin films with precisely controlled chemical composition, crystal structure, and morphology.

Perhaps sensing that some of what he has just described is challenging for an interviewer to understand, Brock switches to another project he has been working on lately. “I am also very excited about a project that uses sunlight to split water into hydrogen and oxygen,” says Brock. “I want to know what is happening at the surface of the catalyst. Unlike some of the other stuff I do, this project is fairly easily understood and the benefits are clear right away.” For years there has been all sorts of hype about the hydrogen economy and the coming wave of cheap, non-polluting energy that will be available. An important step to reaching this clean-energy future is the development of a reliable and efficient source of hydrogen. Brock’s research is helping to lay the foundation for a future free from fossil fuels.

After years of simply using CHESS in his research, Brock switched gears a bit and led the development of the new G-Line addition to CHESS commissioned in 2002 – first as Principal Investigator of the proposal to the NSF, and later as G-line Director. With the addition of the G-Line, CHESS gained 3 new ultra-high flux synchrotron x-ray beam lines and innovative new capabilities. In 2013, Brock was named Director of the entire CHESS facility, while keeping his position as Professor of Applied and Engineering Physics as well. If this sounds to you like Brock has two full-time jobs, you would not be far off the mark. “I was always a heavy user of CHESS and I was eventually given the title of G-Line Director,” says Brock. “And then when Sol Gruner stepped down as Director of CHESS, I segued right in, leading the writing of the renewal proposal to the NSF. I became the Director, but I certainly did not want to give up my own research.”

As Brock talks about CHESS, it becomes clear that here is a man who truly loves what he does. “The short answer is that CHESS enables science. That is what we do. We give scientists tools and x-ray techniques that drive advances in our understanding of biological, electronic, and structural materials at the atomic scale,” says Brock. “We help people understand the behavior of all sorts of materials at a very fine atomic scale. In some ways, where we are right now with x-rays is where we were in the 1960s with lasers. We have to always ask ourselves ‘What is this tool good for?”

Brock and the talented scientists and technicians at CHESS have recently come up with a new use for their tool, and it is one they are very excited about. “We can take a biological sample and make a 3-D map of the elemental distribution in the tissue,” says Brock. “The first thing we scanned was a flower—an iris—and when we showed it to a plant biologist he was amazed. It opened up whole new lines of questions to ask.” Other researchers scanned a shrimp in order to pinpoint exactly where in the shrimp arsenic collects. They were able to identify which chemical form of arsenic was present as well. As some forms of arsenic are poisonous to people, this knowledge could be valuable.

“We have more than 1200 user visits a year,” says Brock. “People come here from academia, national laboratories, industry, government, and even museums. One of our major strengths here is the ability to develop new technologies and uses and to then recruit new users. We encourage potential users to bring us your hardest atomic scale structural problems—the things that you can’t do someplace else—give us a call and let us go at it with you.”