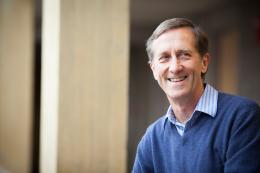 Breaking rules to bring people together in the 'radical middle'

In 1998, John Thompson became Chief Geoscientist and then Vice President for Technology and Development of Canadian mining firm Teck Resources. Since 2013, Thompson has been on the faculty of Cornell’s Department of Earth and Atmospheric Sciences. Based on his experiences in both worlds—mineral extraction and academia—Thompson has come to see himself as a member of what has been dubbed the “radical middle.” In an age when political and environmental debate is more polarized than ever, Thompson breaks the rules by standing firmly in the center of the debate and encouraging activists, citizens, corporations, academics, and governments to meet him there to talk about what is possible.

“I am an incredible optimist,” says Thompson. “And my optimism is driven by the things people are actually already doing. People in industry know that they can’t just do things the way they used to. And citizens are realizing that some level of mineral and resource extraction is necessary. There is a lot of room in the middle for compromise and agreement. I believe that if we are smart about the challenges and considerate of people, we can change the way things are done. We can make it sustainable.”

Maybe it is only natural that Thompson finds himself standing in the middle. Since graduating from Oxford University in 1976 with his B.A. and then from the University of Toronto with a Ph.D. in 1982, Thompson has worked for a number of mining companies AND he has served as director of the Minerals Deposit Research Unit of the University of British Columbia, as well as in his new part-time position at Cornell.

The official name of Thompson’s endowed professorship at Cornell is the Wold Family Professor in Environmental Balance for Human Sustainability. The position was founded with a generous gift from John S. Wold, M.S. ’39 geology. Wold had a long career in various extractive industries and also served a term as Wyoming’s lone Representative in the United States House. “John Wold is in his late 90s and he is a truly visionary man,” says Thompson. “He understands the pressing mandate for society to strike a balance between the need for resources and the need for a clean environment. He endowed this seat so that someone at Cornell could help to break down the walls between people on opposite sides of the debate about resource extraction.”

The term Thompson uses in conversation, “the radical middle,” was coined by another geologist with one foot in industry and the other in academics, Scott Tinker of the University of Texas at Austin. Tinker’s idea is that groups of people representing industry, academia, government, and concerned citizens can come to workable solutions to seemingly intractable problems if they are willing to “leave their corners and seek compromise.” It may seem like a simple idea, but it does not happen very often when it comes to hot-button environmental issues.

In his years in the mining industry Thompson saw a great shift in how companies approach communities. “For people in the resource industry there is a tremendous need to listen to and understand where people are coming from,” says Thompson. “The company I worked for, (Teck Resources), hired experts from the not-for-profit sector because they had experience listening to and engaging with local people in areas where a new mines were being proposed. Over time, industry’s calculations of costs and benefits have changed considerably. They now include things like water quality, biodiversity, cultural values and attitudes, and effects on the local people—not just potential profit. There are many examples where communities benefit from mining, although historically this was rarely the case. Now companies often work closely with the local community to try to create lasting benefits.”

Thompson doesn’t just talk about the importance of getting people with different points of view together. He also lives it. Thompson serves on the Future of Mining and Metals Global Agenda Council of the World Economic Forum. The group consists of academics, industry leaders, government officials, and representatives of non-governmental organizations dedicated to sustainability and the environment. “I have been blown away by the depth of the discussions and the seriousness of the people involved,” says Thompson. “These people really want to plan a course for a more sustainable industry.”

In addition to his work with the World Economic Forum, Thompson also uses his technical expertise to search for ways to make mining practices cleaner and better for people and the environment.  He is currently working with his chemical engineering graduate student  to optimize processes for getting copper out of the ground without having to dig a mine.

The Wold professorship was a huge attraction to John Thompson. It seemed like the perfect match for his mix of academic and industrial experiences, his desire to expand the radical middle, and his strong commitment to sustainability. In addition, Cornell’s reputation as a place where faculty across the university are open to collaborations has proven to be entirely true. And there is the added consideration that John Thompson’s daughter earned her undergraduate degree in microbiology from Cornell, so he and his family were already familiar with the many attractions of life in the Finger Lakes.

John Thompson seems like a man who has found a good balance in his professional life. He is happy at Cornell, he finds his work with the World Economic Forum challenging and rewarding, and he does a bit of consulting with a mining technology start-up. “I still have one foot in both worlds and it really suits me,” says Thompson.  “It feels good that in my professional life I also get to work toward some sort of balance between what society needs in terms of energy and resources and the real cost of getting those things.”