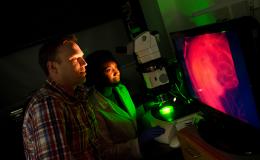 Many people have the mistaken impression that the only factor affecting how a cell develops is its DNA. This is certainly not true and Jonathan Butcher, associate professor and associate chair of Cornell’s Department of Biomedical Engineering, is exploring the role a cell’s microenvironment plays in its development. “It is becoming increasingly clear that a cell’s microenvironment in large part drives its function.” says Butcher. “The way a cell behaves in development—it is not reading a book—it is sensing and reacting to the environment it is in.”

The specific environment Butcher and his lab study is inside the heart and its valves. “Almost all of the current understanding of cardiogenesis and valvulogenesis comes from biologists and geneticists,” says Butcher. “We need to learn more about the role of mechanics in biological development.”  On the wall of Butcher’s office in Weill Hall is a poster showing seven images of 3-D reconstructions of a chicken embryo’s heart. The images were taken one day apart from each other and show the remarkable differentiation and specialization that take place in one week of a chicken embryo’s development.

Engineers impact the study of biological processes by providing tools and analytical techniques to quantify and precisely perturb the biomechanical environment of the growing organism. The same is true for Butcher’s lab and his study of heart development. “We use a century-old technique called ‘windowing,’ where we remove a small portion of the shell of a developing chicken embryo and we can watch in real time as it develops.” Butcher uses a combination Leica micro/macro-scope to see how the pumping action of a developing heart contributes to the formation of valves. “What we are learning from our studies,” says Butcher, “is that the cells that become heart valves are actually extended and elongated by the mechanical forces exerted on the cells due to the pumping of the heart.”

“We are trying to uncover and explain the engineering principles inherent in development,” says Butcher. “I teach a natural engineering class to help students understand just how incredible the biological development process is.” The more deeply researchers can understand the usual process cells go through, the more insight they will gain into disease and injury.

Butcher is developing technological processes whereby he can manipulate and interrogate valve formation to learn how these cells respond to injury. “We can perform non-invasive surgery on the embryos using a laser so precise it can ablate small clumps of cells deep in the developing heart without even causing it to bleed.” Butcher is, in effect, creating an isolated mechanical performance problem in a developing valve and then testing its direct downstream local and global effects on heart and valve maturation.

In order to do what they do, the Butcher Lab has developed novel microscale biomechanical testing devices for embryonic soft tissues and novel imaging methods using micro-computed tomography and ultrasound. They also apply custom 3-D engineered tissue culture systems to examine molecular and cellular mechanisms. “I stumbled into 3-D printing,” says Butcher. “When I was first exposed to the idea of 3-D tissue printing during my postdoc, I thought it was crazy. But when I came to Cornell my office was next to Professors Larry Bonasser and Hod Lipson, who were both very into 3-D printing. With their collaboration, we started on 3-D printing in our own lab in 2008, but it was four more years before we got our first paper published on the 3-D printer technology. That first time we printed a heart valve with real patient anatomy out of hydrogels was a real red-letter day in the lab.”

Another line of research Butcher is pursuing involves developmental paradigms in postnatal valve disease. He is finding that in several diseases of the heart valves, the cells and tissue affected mimic immature developmental phenotypes—it is as if the cells go backward and become less mature rather than more.

At the root of all of Jonathan Butcher’s work one can sense a deep and abiding respect for the engineering accomplished by nature. Cellular interactions and overall tissue function and remodeling are heavily shaped by the external mechanical and biological environment in which they reside. Butcher wants to figure out the developmentally defined rules governing the proper interplay between cells and their environment for naturally engineering healthy mature cardiovascular tissue. He then wants to use what he learns to combat diseases and to engineer living replacement tissues.