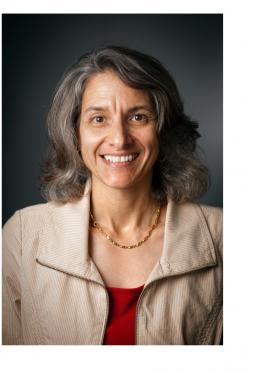 In 2006, Julie Nucci presented a paper called “Passivation Effects in Ultrathin Copper Films.” In 2009, Nucci published a paper called “Pondering a Career Change? Become a (Greatly Needed ) Physical Science Teacher.”  Taken together, these papers encapsulate the dual nature of Nucci’s professional life at Cornell. She is a researcher, but she is also passionately dedicated to making K-12 science education better.  This commitment to having a direct impact on the scientific education of students long before they get to college sets Nucci apart.

Nucci, who is currently an adjunct professor in the Department of Materials Science and Engineering at Cornell, has always been passionate about both learning and teaching.  “My dad had no sons,” explains Nucci. “I grew up fixing cars in the garage with him. He was a land surveyor, so I learned how to survey.” Her thirst for learning led her to earn a Bachelor of Science in materials from Rennselaer Polytechnic Institute, a master’s in applied physics from Harvard, a master’s in materials science from Cornell, and a doctorate in materials science from Cornell.

While accumulating advanced degrees, Nucci often found herself engaged in outreach with younger students. “As a grad student, I co-chaired the ‘Expanding Your Horizons’ STEM outreach group at Cornell and brought Girl Scouts into the nanolab. I enjoyed  sharing what I was doing with the kids and exposing them to cool science. My mom, my aunt, and my grandfather were teachers.” says Nucci. “Being raised by a teacher nurtured the teacher in me.” After a post-doc at Cornell and time off to raise her young daughters, Nucci went to work for the Max Planck Institute for Metals Research in Stuttgart, Germany. While doing research at the Planck Institute, Nucci also gained policy experience by serving as the European Union liaison officer for the Max Planck Institutes for Metals and Solid State Research.

In 2006, Nucci’s strong interest in science education led her to accept a position as director of the Center for Nanoscale Systems’ Institute for Physics Teachers, also known as the CIPT. The CIPT, founded in 2001, was located at Cornell and received its funding from the National Science Foundation. The CIPT’s mission was to help increase the number of qualified STEM (science, technology, engineering, and math) workers by improving the quality of high school physics education and engaging students through hands-on, laboratory activities relevant to their daily lives. “I could have gone on doing my research,” says Nucci, “But I would never have the impact I have had by training teachers.”

The CIPT was very successful. 50% of New York State physics teachers (and more than 1500 teachers worldwide) participated in workshops and graduate courses over the ten-year life of the program. Teachers were awarded more than $200,000 in grants to purchase CIPT hardware for high school classrooms. A hardware lending library of nearly 40 classroom activities was created for high school physics teachers to borrow from free of charge. The CIPT model and lending library caught on and were implemented at other US universities and in some international locations as well. During her tenure at the CIPT, Nucci provided teacher professional development workshops in Qatar at the request of Well Cornell Medical College-Qatar, in Singapore at the request of the Singapore Education Ministry, and in Puerto Rico in collaboration with the Arecibo Observatory.

Unfortunately, funding for the Center for Nanoscale Systems and the CIPT ended in 2011, at a time when the federal government was cutting expenses across the board.  “A lot of what I wanted to do to train teachers didn’t fit neatly into anyone’s funding box,” says Nucci, highlighting one of the trouble-spots in national efforts to improve the quality of high school STEM teachers and classes. Despite this disappointment, Nucci’s experiences working with physics teachers earned her an appointment by Provost Kent Fuchs to the team developing the K-12 education and outreach plan mandated by Mayor Bloomburg as part of Cornell’s New York City Tech Campus proposal. She serves at the state level as a member of the New York State Leadership Team for the development and review of the Next Generation Science Standards for K-12 education, which is an ongoing effort begun in 2011. Nucci was also invited to testify before Governor Cuomo’s Education Reform Commission in the fall of 2012, where she shared her vision for science education reform in New York State.

While out in the broader world, advocating for improvements to K-12 science education, Nucci also had a job at Cornell, educating undergraduate engineers. “When it is about growing a scientist, that’s when I get excited,” says Nucci. “I am teaching the Senior Lab class, which is a capstone research project for our seniors. For some students, I get to guide them through their first real research project and help them build an important skill set that includes working in a team, writing, and presenting.”

Along with her work with materials science students, Nucci has managed to stay active in teacher education, as well. She is the project manager for Cornell’s GK-12 Grass Roots Program, in which doctoral students doing renewable energy research interact with teachers and students in K-12 schools to enrich STEM content. Three doctoral students and two local high school teachers participating in this program recently traveled to India where they visited several schools affiliated with Somaiya Vidyavihar, a private education organization.  After a day-long presentation at The Somaiya School in Mumbai, India, the Head of the primary school, Parveen Shaikh, wrote to Nucci to report how the day went: “Your team is wonderful. They stole the show with their practical approach towards science and their simple hands-on ideas. At the end of the day, everyone was raving about the initiative.”

Julie Nucci is a passionate advocate for science education. As such, the note from Ms. Shaikh made her day. “This is why I do these things that are outside the call of duty, but which often bring a great sense of accomplishment and feeling that the work done has real impact.”