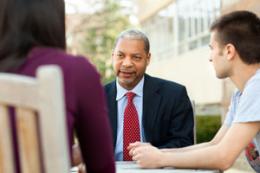 In the summer of 1989 Cornell College of Engineering Dean Lance Collins was not a dean.  He was a post-doctoral student at the Los Alamos National Lab, studying turbulence with a master of the field, Frank Harlow. In his free time, Collins liked to head up into the Rockies of New Mexico and Colorado along with some of his colleagues from the lab so they could climb some of the many 14,000-foot high peaks. During one memorable hike, Collins and his scientist friends decided to take a short break at the high point in their hike.  They sat on a mountaintop and looked out over the foothills and lowlands, enjoying the sunshine and the feeling of accomplishment. During their break, Collins looked at two of his companions and noticed that their hair was beginning to stand straight up.

In a matter of seconds they realized the danger they were in and squatted low on the balls of their feet so as to make as unattractive a path as possible for the incoming lightning strikes. "It was like bombs going off all around us.  And we knew that if one of those bombs hit us, we were dead. We waited for the lightning strikes to become less intense and we took off at a run down that mountain. We were really lucky nobody died."

Collins and his hiking companions had broken a fundamental rule of hiking in the mountains: keep your eye on the sky. While they were busy enjoying the view in one direction, a large cumulonimbus cloud had snuck up on them from the other side of the mountain. It would make a great story to say that those lightning strikes led to an immediate scientific insight in Collins's mind about what allows clouds to grow as fast as they sometimes do. But that is not how Collins came to his breakthrough insight. That came years later.

Lance Collins's path from Los Alamos up into the Rockies and then, eventually, to Ithaca had its start in his father's woodworking shop in Westbury, Long Island, New York. "My dad was a carpenter and he had 4 kids. I was the only one that would spend the day with him in the shop," says Collins. "I never really learned to build anything myself, but I loved seeing how all the equipment worked." This combination, a strong curiosity about how things work and little interest or ability in actually building anything himself, has led Collins to a successful career modeling turbulence in various fluid systems.

Collins's parents did not go to college, but, he says, "they were very aspirational for their children. With my mom, I knew it was not okay to come home with average grades." Collins worked hard in high school and got better-than-average grades, but still he was not exactly sure what he wanted to do with his life. "I knew I wanted to make good money and I knew that engineers did well, but in high school I had no idea what engineers did." Just before senior year of high school, Collins spent two weeks on the campus of Lafayette College as part of the Minority Introduction to Engineering program. "What really got me hooked was a game they had called Lunar Lander," says Collins with a chuckle. "I played that game every spare moment I had."

Going to college was never really up for debate. "My two older brothers went to Yale and it was just a foregone conclusion that I would, too," says Collins. "But I rebelled and I didn't even apply to Yale." Instead, Collins followed the advice of his guidance counselor, who he says "pushed hard for Princeton." At Princeton, Collins majored in chemical engineering and, class by class, found out what engineers do. "Fluid mechanics is the area I gravitated toward. I was riveted by it the moment I stepped into the first class." The next decision for Collins was whether to get into industry or to pursue a career in research and academics. Says Collins, "I used two of my college summers to explore the difference between research and industry. I worked at a spin-off of Bell Labs and then I worked at a DuPont plant in Jersey. I loved every minute at the lab and my mind was made up."

From Princeton, Collins moved to Philadelphia, where he received a Masters and then a PhD in chemical engineering from the University of Pennsylvania. This led to his post-doc at the Los Alamos National Laboratory with Frank Harlow, who is credited with establishing the science of computational fluid dynamics as an important discipline.  His stint under Harlow led him to a professorship at Penn State, where he taught for 11 years.

And this is where we come back around to clouds. At Penn State, Collins was working with a grad student on simulations involving powdered paint pigments. "Our models showed that particles in a turbulent flow would collect in bunches due to vortices," says Collins. "This packing of particles makes them collide more than if they were uniformly distributed." Collins's graduate student, Walter Reade, gave a talk on their research findings, and a meteorology graduate student in the audience, Raymond Shaw, saw a possible link to the process whereby atmospheric clouds form more quickly than previous mathematical models would predict. Collins right away recognized an opportunity to merge the thinking from two different fields and change the way scientists thought about cloud formation.

Collins, Reade, Shaw, and Penn State Professor of Meteorology Johannes Verlinde published a groundbreaking paper in 1998, in which they laid out their theory of Preferential Concentration of Cloud Droplets by Turbulence. In the years since their paper came out, other researchers and experimentalists are proving it true. "The real contribution in our work is not to weather prediction, but to improving climate models," says Collins. "Human production of aerosols and fine particles can lead to cloud formation, and cloud cover has a marked effect on Earth's climate." Clouds can reflect incoming energy from the sun, but they can also trap heat from the surface, and, Collins says, "their impact leads to the largest uncertainty in global climate models." Knowing more about the process of cloud formation can help climatologists create more accurate global climate models.

As the Joseph Silbert Dean of Engineering at Cornell, Collins no longer has the time to take off with his friends and climb mountains in Colorado. These days, you can find him getting his physical fitness fix at his 6 am spin classes, which he says are addictive. Collins explains, "You wouldn't think it would be a positive experience to be in this room at six in the morning with really loud music and an almost-abusive trainer yelling instructions, but I wouldn't miss it.  It is almost like a religion for me."

Even more than pumping away on a stationary bike, Collins likes working with numbers to help explain the physical world. "What I really like to do," says Collins, "is work with data to create models." But if you picture Dean Collins sitting in his office, alone and staring at a computer, you are getting the wrong picture. "I love working with experimentalists in a deep way. At Cornell, the experimentalists invite you in," says Collins. "They want you there at the lab meetings—they want you in on everything. And this way of working really suits me, too."  He has 2 PhD students and a post doc doing research into the behavior of small particles embedded in the flow of high speed or large scale fluid systems.