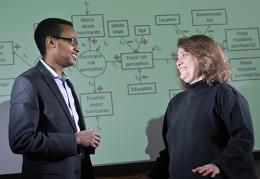 Using math to explain the unexplainable

Just about every engineer you talk to tells a similar story about their childhood. At some point in the conversation they will say “I always liked taking things apart to see how they work,” or “I hit middle school and saw that I was really good at math and science,” or “When I was in kindergarten I built my own rudimentary computer.”

Professor Linda Nozick of Cornell’s School of Civil and Environmental Engineering tells a very different story. “I was never one to study much in high school. I had no interest in math or science until I got to college,” says Nozick. “I started out as a business major. But then I took a Stats class and I switched right over into Systems Analysis and Engineering.” The study of math and systems opened up a whole new world for Nozick. “I found that I could do something with math that I could not imagine how to do without math. I suddenly had a way to model and make sound decisions in important situations. It is the power of it that struck me as so valuable.”

After graduating in 1989 with a B.S. in Systems Analysis and Engineering from George Washington University, Nozick went on to earn a Masters and a Ph.D. in Systems Engineering from the University of Pennsylvania. She then joined the faculty of Cornell’s School of Civil and Environmental Engineering in 1992 and has been at Cornell ever since. “It is hard to believe I have been here 22 years already—it has gone by really fast,” says Nozick with a surprised look on her face.

She should not be so surprised—they say that time flies when you are having fun. And listening to Nozick talk about her work, it is obvious that she is having fun. “When I started here, I wasn’t really thinking about a career. I was thinking about what I enjoyed doing. I have a great job. Every day I get to choose among my many areas of interest.”

At first, Nozick focused on research into supply chains and the transportation of hazardous wastes.  Now she focuses more on modeling critical infrastructure systems to enable better response and performance in emergency situations. Based on her research into the transportation of hazardous waste, Nozick was appointed by President Barack Obama to the United States Nuclear Waste Technical Review Board in 2011. She was reappointed in 2014.

Much of Nozick’s work these days involves developing tools to model the effects of large-scale natural disasters on complex civil systems. Her work helps municipalities and states develop evacuation plans, decide where to put shelters, and plan mitigation strategies in advance of disasters. With all this focus on large-scale disasters, one might think that Nozick would become a worried and pessimistic person. She shoots that idea down immediately. “I am a very optimistic person,” says Nozick. “I have a great job in a great place and my work helps people prepare for and survive natural disasters. At this stage of my career my job is awesome. I get to follow my curiosity wherever it takes me.”

Twenty or thirty years ago someone doing the work Nozick does may have found herself in a department other than the School of Civil and Environmental Engineering. “Civil Engineering as a field has expanded greatly. It is no longer just focused on structures,” says Nozick. “It is really all about sustainable urban development and that is exactly what my work aims for.” Nozick is an active member of the faculty group focused on the Engineering Management minor and M.Eng. degrees at Cornell. She helps students see how math and models can make them better engineers and better managers.

In addition to her research, Nozick also gets much of satisfaction out of teaching. “Students change over the years and I need to change my teaching to be effective,” says Nozick. “I read every single evaluation my students write at the end of each semester to make sure I am doing a good job. I guess I could stop reading them, but that would mean that I had given up or don’t care. If you are self-motivated, the life of an academic is a great job,” Nozick adds with a grin.

Once Linda Nozick discovered for herself the powerful explanatory power of math and modeling, she began to use it to help the world prepare for and react to emergencies of all sorts. She also committed herself to passing on what she has learned. So, in all of her free time, Nozick has helped create one of the top ten distance learning engineering degree programs in the country. “All told, I have been involved in getting this program up and running for seven years now,” says Nozick. “It is a great way for working engineers to get a Masters in Systems Engineering.” When asked what she would be doing if she had not found math, Nozick looks perplexed for a long moment, shakes her head, and says, “I just don’t know…I like this too much to do anything else.”