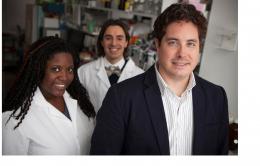 New cancer treatments generally work best in a petri dish. Once the treatment is moved into the more realistic (and messier) setting of a living creature, the effectiveness of the treatment usually declines precipitously.

The great problem with this rule is, people don’t get cancer in a petri dish—they get it in their bodies.

Mike King and his team in Cornell’s Department of Biomedical Engineering are having great research success at breaking this general rule. They have created a method for killing metastatic cancer cells directly in the circulatory system. And their method, which was somewhat effective (60%) when carried out in saline solution in a petri dish, turned out to be nearly 100 percent effective when carried out in conditions that include the turbulent blood flow of the circulatory system.

“When we discovered this phenomenon it was quite surprising,” says King. “Normally, the best case scenario of targeted therapeutics is in a petri dish with nothing else in the way. Our approach worked far better in the blood than in the dish. I don’t know of any other drug delivery system that works this way.”

To understand the unique nature of the approach King and his colleagues are taking to fight the spread of cancer in patients, it is important to understand the way cancer kills its victims. A cancerous tumor is really just a mass of cells that have started to split and grow in an uncontrolled way. Some flaw in the DNA of the cells causes them to reproduce dangerously fast. Because the cells of the tumor are the patient’s own cells, the immune system is not very effective at recognizing and fighting cancer. As a tumor grows, some of the cancerous cells can break loose and make their way into the lymphatic system or the bloodstream.

In this way, the original cancer migrates to other parts of the body, where new tumors can then grow. It is this spreading, or metastasis, of cancer that makes it such a deadly disease. If caught early, the original tumor can often be surgically removed or treated with chemotherapy or radiation or other treatments. But once cancer cells enter the blood or lymph, the cancer is said to be malignant and it becomes much more likely to kill.

What early trials of King’s treatment have shown is that it might be possible to enlist a patient’s own white blood cells to encounter and kill any cancer cells found in the bloodstream, and in this way prevent a tumor from metastasizing. “We are now taking the steps necessary to translate this approach to the clinic,” says King.

Earlier in his research career, King studied the cells present in the blood, without any attention given to cancer. “Over time I became more and more interested in trying to understand the physical mechanisms of metastatic cancer,” says King. “Combined with what we already knew about other cells in the blood, it put us in a good position to come up with this approach. The stars really aligned.”

King’s team injects two proteins into the blood: E-selectin and TRAIL. E-selectin is a molecule produced by the body that acts as an adhesive. TRAIL (Tumor Necrosis Factor Related Apoptosis-Inducing Ligand) is a protein produced by immune cells. It binds to tumor cells and induces apoptosis, or programmed cell death, in the cancer cells. When these proteins, connected to the surface of nanoscale liposomes, are injected into the bloodstream, the E-selectin sticks the TRAIL molecules onto white blood cells called leukocytes. The leukocytes travel through the circulatory system in the blood, where they usually attack foreign bodies in order to fight disease. Untreated leukocytes do not normally recognize metastatic cancer cells in the blood as a threat. But leukocytes coated with TRAIL bind very effectively to the cancer cells, which then die within hours.

“In this form, we can greatly reduce the dosage of TRAIL that is needed to kill circulating cancer cells. There is greater efficacy and greatly reduced toxicity,” says King. Trials in animals are ongoing, and King hopes to proceed to human trials sometime in the future. “This could revolutionize the way metastatic cancer is treated,” says King. In talking about his lab’s efforts, King emphasizes the collaborative nature of the work they are doing. “At any given time there are four or five undergraduates in the lab. And the quality of our grad students is absolutely amazing. I just have to point them in the right direction and then hang on,” says King. “This paper we published in January, we worked on it for five years. But now I feel like we are really on the verge of something big.”