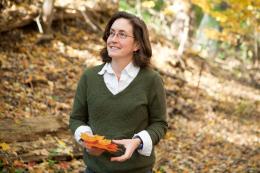 When Natalie Mahowald was in middle school in Omaha, Nebraska she took one of those aptitude tests teachers and guidance counsellors sometimes give. The results came back with the oddly specific recommendation that Mahowald might be happy pursuing a career in Geophysics.

Mahowald is now a professor in the Department of Earth and Atmospheric Sciences (EAS) at Cornell and a Fellow of the American Geophysical Union. Her research focuses on the atmospheric transport of biogeochemically important species (such as desert dust) at the regional and global scale. She uses models, satellite observations, and field data to better understand how humans are perturbing the natural environment, most specifically through biogeochemical feedback.

In plain language, Mahowald studies the cascading effects of the things human activities are adding to the atmosphere. “It is surprising just how much humans have perturbed the system,” says Mahowald. “Just as an example, over the past hundred years, there has been a huge increase in the amount of iron  deposited by aerosols into the seas.” Given this observation, Mahowald had a million questions—none of which is easy to answer.

For example, iron in the dust of the Earth’s deserts is not very soluble. Yet, when these desert dusts are blown into the atmosphere the solubility of the constituent iron somehow increases greatly. Is the solubility of iron affected by the concentrations of sulfur or organic acids human activities release into the atmosphere? Mahowald’s research has suggested that there has been a huge increase in the amount of bioavailable iron in the oceans over the past century as a result of human activities.

Another interesting finding of Mahowald’s work has been the prediction that as countries work to reduce their emissions of aerosols, solving climate change will become harder. Anthropogenic aerosols—those released to the atmosphere by human activities—are harmful to people’s health and cause illness and early death. But these same aerosols cool the climate and partially offset the warming caused by emissions of greenhouse gases. In addition, these same aerosols fertilize the oceans and land and allow biota to take up more anthropogenic carbon dioxide.  So, as humans reduce our emissions of aerosols, fighting climate change will get harder.

Given the complexity of the global atmospheric system, Mahowald’s research goals can seem daunting. One long-term goal is to create a model of the atmosphere and how it responds to human activities. “I want to get to the point where we can use my model to answer the question, ‘given this particular policy, what are the likely climate results?’ We are not there yet. We are still discovering that things people thought we could ignore when creating these models can’t be ignored.”

Between that aptitude test in middle school and joining the faculty at Cornell, Mahowald had a few intermediate stops. She earned undergraduate degrees in German and physics from Washington University in St. Louis; she received a Master’s in natural resources policy from the University of Michigan; she earned a Ph.D. in meteorology from MIT; and she conducted postdoctoral research at Stockholm University in Sweden. Mahowald held a faculty position at UC—Santa Barbara for four years and then joined the National Center for Atmospheric Research (NCAR) for five years before coming to Cornell in 2007.

In addition to studying the role of atmospheric desert dust in climate and oceanic micronutrient levels, Mahowald also studies the role of fires and droughts in relation to the carbon cycle and global climate. Essential to understanding the role of dust, fire, drought or anything else that alters the levels of gases, particles, and aerosols in the atmosphere is creating a good model of atmospheric transport in the troposphere.

When asked about the difficulties involved in modeling something so dauntingly complex, Mahowald says “We start by building the most simple model first, and then we build it up from there as we collect more data. I am interested in the big picture—exact mechanisms are less important to me. As long as we know the rate-limiting steps our models will work well.” Mahowald’s hope is that by creating a good model of the climate system, policy-makers will be able to focus on interventions or changes that will provide “the most bang for the buck.”

In addition to her research, Mahowald teaches classes and is the director of graduate studies for Atmospheric Sciences “Students really make you think,” says Mahowald. “Being a professor is a great job—I get to teach; I get to do research; and I maybe get to make the world a better place.” It is now almost forty years since she took that test in middle school and it seems safe to say that in Mahowald’s case, the aptitude test nailed it.