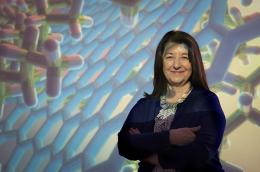 The definition of a real Cockney, according to tradition, is someone raised within earshot of the bells of St. Mary-le-Bow Church in London’s East End. Paulette Clancy, Professor in the Robert Frederick Smith School of Chemical and Biomolecular Engineering at Cornell (and a proud Cockney), cannot hear the bells of St. Mary-le-Bow from her office in Olin Hall, but she could as a young woman in London.

“My original plan was to come to Cornell for a two year post doc, return to England, and get a job in industry,” says Clancy. That plan took shape in 1977, as Clancy was finishing her Ph.D. in chemistry at Oxford University. But then Clancy discovered the truth of the John Lennon lyric “life is what happens to you while you are busy making other plans.” During her two-year stint as a post doc at Cornell, Clancy bought a convertible Camaro and took it all over the country. “My time at Cornell was truly invigorating,” says Clancy. “I loved the work I did and I loved the excitement of seeing the United States.”

When she got back to Britain, Clancy took another post doc and then, eventually, a job with a major oil company. “After my time at Cornell and all of the excitement that came with it, I really did not like the place I ended up.” In the meantime, Cornell called and offered Clancy a position as Assistant Director of the Cornell Manufacturing Engineering and Productivity Program (CoMEPP) under its founder, Professor Jack Muckstadt. Clancy and her husband jumped at the chance to come back to Cornell. “Jack hired me as his wingman,” says Clancy with a smile. “I had to learn all about manufacturing, supply chains, and optimization. Jack, Al George and John Hopcroft all taught me invaluable lessons about proposal writing and so much more.”

Clancy stayed with the CoMEPP until she spotted a tenure-track faculty position open in the School of Chemical and Biomolecular Engineering at Cornell. “I applied right away,” says Clancy. “It was 1987 and the department was a much different place then. It was all-male, for one thing. Also, it was still transitioning from its focus on teaching to a more research-intensive department. To be honest, I was a bit of a risk for them. I was a chemist who did computational materials science. Yeah—I was a real risk.”

Happily for both Cornell Engineering and Paulette Clancy, the risk has paid great dividends to everyone.

Clancy’s work remains focused on using computers to model semiconductor materials at the atomic and molecular scale. Her aim is to understand the link between the atomic structure of a material and its properties. This improved understanding allows Clancy to suggest processing conditions and production techniques that will lead to materials well-suited to a particular sets of design constraints. Her lab is one of the leading groups in the country doing this sort of research into semiconductor materials and her work has both immediate and long-term implications for computing, energy production, and even the chemistry of life on other planets. Her passion for computational science (solving real-life problems in science and engineering) led to her being named as the inaugural Director of the Cornell Institute for Computational Science and Engineering.

In recognition of her commitment to sustainable energy, Clancy currently serves as the Associate Director of the Energy Institute at Cornell, (an institute she and Professor Teresa Jordan were instrumental in helping to create as a fledgling Engineering College initiative.)  In the past, she co-chaired the development of a ten-year Strategic Plan in Energy for Cornell Engineering. And she has led a large NSF-funded Training Grant focused on renewable energy to improve the communication of energy issues to the general public.

The long-term goal of Clancy’s research is to create designer materials based on the characteristics desired for that material. “Once you really look at how many designs are possible for these materials, you start to see that the number is staggering. Far too many to make and test them all,” says Clancy. To help optimize the search for new material designs, Clancy has recently won an NSF grant in conjunction with Professor Peter Frazier of the School of Operations Research and Information Engineering (ORIE) at Cornell. She and Frazier hope that their novel use of Bayesian statistics and optimization in conjunction with molecular-scale information will help scientists tame the complexity of possible solutions in novel and unexpected ways. Such efforts could, she believes, blossom into a new field of scientific endeavor that they call ‘physical analytics.’

Cornell is the perfect place for Clancy to do the work she does because of the faculty strength in atomic and molecular scale fundamental research among materials scientists, chemists and engineers. . As a case in point, one recent and highly successful collaboration that might only be possible at a place like Cornell is Clancy’s recent work with planetary scientist, Jonathan Lunine. “My work with Jonathan was so exciting,” says Clancy. His expertise with the Cassini missions to Titan helped identify the compounds present in the atmosphere of Saturn’s moon, Titan. Together with graduate student James Stevenson, Lunine and Clancy used complex computer modeling and simulation to show that it would be possible for oxygen-free membranes that are the first prerequisite to proto-biological life to self-assemble in Titan’s atmosphere. This work created a lot of media interest on platforms from the BBC to reddit.com and was one of Science Advances top-10 articles in 2015.

In addition to her groundbreaking materials research, Clancy has also been recognized for her strong commitment to increasing the presence of women in the physical sciences and engineering. She has won several awards for mentoring and helped create the Women in Science and Engineering (WISE) faculty group at Cornell. “I tell my children and my students that mentors are very important,” says Clancy. “You need to seek them out—to find people who can help you learn the things you need to learn. I had several great mentors along the way and I am especially proud of the mentoring awards I have received.”

So here it is almost thirty years since Clancy came back to Cornell for her job at the Manufacturing Engineering and Productivity Program. As we wrap up our conversation, the sound of tolling bells is just audible through the closed windows of Clancy’s office. They are most certainly not the bells of Saint Mary-le-Bow, but one gets the sense that Clancy doesn’t mind one bit.