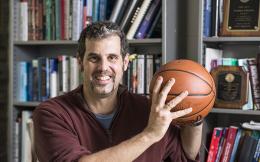 It can sometimes be hard to get engineering professors to talk about much other than their work. With Peter Diamessis, associate professor of civil and environmental engineering at Cornell, this is not the case. In the course of a ninety minute conversation, Diamessis mentions abstract expressionist painter Jackson Pollack, NCAA basketball coaches Pete Carril and John Wooden, percussionist Angel Figueroa, the 1968 rock classic “In a Gadda Da Vida”, and the traditional Chinese practice of health and healing called Qigong.

You see pretty quickly that Diamessis is not content to stay on the surface of things. He prefers to look deeper—to sit with a topic and ponder the more fundamental and far-reaching aspects of whatever it is he is thinking about. “At some point pretty early it was clear to me that all these things I like to do—playing basketball, writing stories, reading, playing music—they all helped me think more completely,” says Diamessis. “They gave me perspective that would be missing if I was focused only on engineering. I know I am pretty unconventional for an engineer,” says Diamessis. He then adds with a bit of a smile, “I don’t always fit in.”

Diamessis grew up in Greece and says he spent six months of each year by the sea. He loved music, poetry, short stories, and basketball. He also enjoyed his math and basic physics courses. When it came time to move on to college, following national competitive entrance exams, Diamessis enrolled at the National Technical University of Athens, where he earned his Diploma of Engineering in mechanical engineering in 1995.

“My mom taught biology and my dad taught at an engineering university in Greece,” says Diamessis. “I inherited an analytical thinking process from them, but I also inherited a love of nature from them.” While at college, motivated by Athens’ serious smog pollution at the time and the need to build his own sociopolitical platform as a scientist, Diamessis joined an environmentalist student group and his experiences there helped him see that he would be happiest if he could combine his interest in abstract engineering with his love of nature.

He enrolled at the University of California, San Diego in 1996 and earned his Ph.D. in mechanical engineering in 2001. “In San Diego I started to find my own identity as an engineer. I had mentors there who were a source of wisdom for me and I found that I could make my own way and work independently.”  His Ph.D. thesis focused on using direct numerical simulations of stratified homogenous turbulence to better understand ocean microstructure measurements. In other words, he was using math and computer simulations to get at the deeper truths of just how energy and materials move through the many layers of the ocean.

From San Diego he headed up the coast to Los Angeles for a position as a post-doctoral researcher in the fluid dynamics group at the Aerospace and Mechanical Engineering Department of the University of Southern California (USC). The move allowed him to deepen his understanding of the invisible movements going on below the surface of the ocean and immerse himself deeper into the world of advanced numerical modeling techniques for the solution of partial differential equations; at the same time he explored some of his own deeper currents. “The people I worked with at USC were great scientists, but they were just as importantly good human beings,” says Diamessis. It is pretty clear from the way he says this that the second qualification may be more important than the first.

“I had a percussion teacher in L.A. named Angel Figueroa and he was an absolutely crazy dude, but also absolutely riveting. He had this ability to fine-tune how he was teaching so that it matched a student’s style exactly,” says Diamessis. “He helped me so much musically, but also as a teacher. I have these internal explosions of excitement when I am teaching and Angel helped me understand that it is important to transmit my excitement to my students. Teaching is a form of performance for me.”

When a position opened at Cornell in 2006, Diamessis read the posting, found it intriguing, and had just one question: Where the heck is Cornell? He did some research, came to visit, liked what he saw and heard as his skills resonated with what the position called for, and was offered the job. Diamessis had never lived far from the ocean and, more dauntingly, had never experienced an actual winter. He was unsure about taking the offer. He asked his father for advice. “Dad told me to simply look at it as a challenge—to just jump in and go,” says Diamessis. So, he did.

Diamessis is now in his 10th year at Cornell in the School of Civil and Environmental Engineering and he is still studying what goes on below the surface. “I am more of a vertical than a horizontal thinker,” says Diamessis. “I interact with people who do physical science out in the water on boats and in the actual ‘wet’ lab, taking measurements. I take their data and use it as initial/boundary conditions and forcing to my numerical models which I then run to understand the relevant physical processes, namely the interplay between turbulent bursts and a special form of waves in the ocean/lake interior, invisible to the human eye, called internal gravity waves. I use partial differential equations to make sense of this interplay at different depths, from the surface, through mid-water and at the ocean/lake bottom. I greatly rely on a particular type of approximation techniques used to “discretize” these equations, i.e., put them in a form directly accessible to a computer. These techniques known as ‘element-based higher-order methods’ give you the maximum bang for your buck when it comes to simulating turbulence and internal waves and reproducing with high fidelity the associated physics.

“The math background these techniques requires is non-trivial, especially from the point of view of linear algebra, which requires me to work closely with applied mathematicians. Some of the systems of equations I set up have millions of unknowns and require massive parallel computing power to solve, giving rise to cutting-edge challenges in terms of data analysis, visualization, transfer and management which call for the wisdom of computer scientists and software engineers. The end result of what I do is just a few numbers, but they increase our fundamental understanding of the interplay between turbulence and internal gravity waves across the water column. Instant gratification is not part of our vocabulary but the satisfaction of slowly but carefully unraveling such complex physics is unparalleled.”

While at Cornell, Diamessis has won awards for excellence in both teaching and advising and it is clear in conversation that he takes both of these responsibilities seriously. “I was a bit lost as an undergraduate engineering student,” says Diamessis. “But in San Diego and in L.A. I had some great mentors who helped guide me. I want to be a good advisor and help students feel like they can come to me with questions or if they just want to talk. Doing research and working with numbers can be beautiful, but it’s student interactions that really make this job worth it.”

Diamessis misses the ocean, but he has come to like life in Ithaca. He says that he cross country skis in an effort to stay sane through the long winters. And he likes to engage in what he calls “urban tourism” with his wife of two years. “I am also a bit of an amateur ethno-musicologist,” says Diamessis. “I like going to foreign cities and listening to people make music. Music can be a way to see deeper into a culture.” There it is again—that idea of seeing deeper. After a long, enjoyable conversation, Diamessis seems to intuit that this is the perfect note to end on.