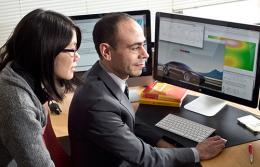 Breaking rules to expand the field of civil engineering

Assistant professor Ricardo Daziano of the School of Civil and Environmental Engineering (CEE) at Cornell is not your stereotypical civil engineering professor. For starters, his Ph.D. from Canada’s Université Laval is in Economics. For another thing, he produces sentences like “Human economic behavior isn’t necessarily irrational; people behave in ways based on how they understand the information and how they can best meet their needs, priorities, and preferences.” And there is also this: he gathers most of his data from surveys, focus groups, and interviews.

It is a bit of a longshot that Daziano is even at Cornell. “When I went out onto the job market after getting my Ph.D., I applied for something like 30 economics positions and just 2 in engineering,” says Daziano. “But when I came to give a talk here, everybody was so welcoming. I really got the sense that CEE wanted to add the tools of economics that I would be bringing. It spoke so well of Cornell that they would be willing to take the chance on me and make me an offer.” Some of the classes Daziano teaches at Cornell are part of the minor program in Engineering Management and the M.Eng. degree program in Engineering Management. These programs allow Cornell students to bring a management perspective to engineering problems and an engineering perspective to management decisions.

On Daziano’s People page on the CEE website, it says that his research focuses on “engineering decision making, specifically on theoretical and applied econometrics of consumer behavior and discrete choice models applied to technological innovation in transportation and energy.” Daziano gives an example to explain. “When people consider buying an electric car, they assign values to all sorts of factors. There is cost, energy efficiency, mileage range, the likely future price of gas, and also the emotional or sentimental value people assign to the car they drive, just to name a few.”  Typically, engineers and corporations give a lot of weight to some of these factors when they design an electric car, but they also typically ignore some factors that turn out to be pretty important.

Daziano wants to know exactly how much weight consumers give the many factors they consider when thinking about buying an electric car. One way for him to do this is to look at real-world data on sales of electric cars. He can see which models sold best and which sold worst and he can make inferences about how consumers value the different alternatives represented by the various models sold.  But rather than rely solely on inferences drawn at a distance, Daziano also collects data from choice experiments run online and at car dealerships. Participants answer a series of questions about the relative importance of the various features they think about when shopping for an electric car. They are also offered various trade-offs—for example the chance to trade a cheaper price for reduced battery range—as a way to get at their preferences and the strength of their preferences.

Once the data is collected, Daziano uses it to determine the sizes of the various segments of consumers who prefer a certain set of features. One very interesting finding from Daziano’s work is that even though most consumers don’t average anywhere near 300 or 400 miles driven in a typical day, a large percentage of people who are thinking about buying an electric car really want a battery that will give them range parity with their current gasoline-powered car. But they are not willing to pay for a battery that would be able to give them this parity. “It turns out that people are only willing to pay half the cost of what it would take at current technology levels to make a battery that would give them range parity,” says Daziano. “The engineering capability does not yet exist to give consumers what they want at the price they want it.”

Daziano says that what he is aiming for is to create an attitudinal model of economic choices. When told that does not sound much like something an engineer would say, Daziano makes it clear that he wants to change this. “I am convinced that the engineering design process needs to include knowledge of human behavior,” says Daziano. Daziano himself is the right person to combine engineering with behavioral economics. He received his bachelor’s degree in industrial engineering and his master’s degree in engineering economics before getting his Ph.D. in economics. So he does have an engineering background.

After five years at Cornell, Daziano says he is certain he made the right choice in joining the CEE faculty. “It is clear to me that we both, (Cornell and I), made the right decision,” says Daziano. “I continue to work on modeling consumer behavior and I am expanding my research into how engineers make decisions that shape technological progress, and Cornell and CEE continue to give my work strong support.”

“People make decisions based on both needs and desires,” says Daziano, “and engineers and companies need to take these both into account when they decide things like what the battery life in a new electric car will be. Engineers can’t ignore human behavior.” Ricardo Daziano certainly does not ignore human behavior. Instead, he does what engineers often do—he tries to quantify and model it.