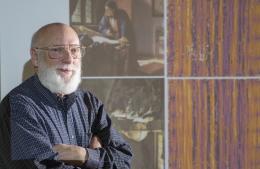 Breaking rules to create a new field of study

Rick Johnson’s field of expertise did not exist until he helped created it.

For years Johnson, who is the Geoffrey S.M. Hedrick Senior Professor of Electrical and Computer Engineering at Cornell, did research into topics at the leading edges of fields created by other people. At first, it was Adaptive Control. As that field cooled off and then fell apart he moved into Signal Processing in Telecommunication. “I seem to have this pattern,” says Johnson, “of changing my emphasis fairly drastically every second sabbatic. I have been lucky that each change I have made has turned out well.”

Johnson feels that part of his great good luck has been rooted in the fact that he is at Cornell Engineering. “Nobody has tried to tell me I can’t do the things I do here,” says Johnson. “The whole philosophy at Cornell about ‘any person—any study’ really is true.”

Johnson’s latest switch of emphasis has brought him into uncharted technical and academic territory. The field he has helped ignite is called Computational Art History and it combines the two big loves of Johnson’s intellectual life: signal processing and art history. “During my fourth sabbatic I spoke with a friend who was chair of the machine learning group at Carnegie Mellon,” says Johnson. “He and I talked about its application to problems in art history. Coming out of that conversation I decided I could be a translator between the two fields, since I already ‘spoke’ both Art History and Engineering.”

To understand where Johnson learned to speak the language of art history, you have to go back to the 1970s. Johnson was a student at Georgia Tech and one of his professors advised him to apply for a fellowship to study in Germany. Johnson was open to the idea and it changed his life. He lived with a German family and they insisted he should visit a fine arts museum.  “I went to the Dahlem Museum in Berlin. I saw the Rembrandts and something happened,” says Johnson, eyes lighting up as he remembers that first exposure to the works of the Dutch master.

When Johnson came back to the United States and graduated from Georgia Tech with a bachelor’s degree in electrical engineering, he decided to go on for a Master’s and a Doctorate at Stanford. “For a while everyone in my family assumed I would just get a job with Georgia Power,” says Johnson. “While at Georgia Tech I had a co-op position with Georgia Power and it would have been easy to get a job after graduation. But it was not what I wanted to do. I wanted to be a professor, which required a PhD.”

When he arrived at Stanford to study electrical engineering, he talked his way into a graduate art history seminar as a way to probe his emerging interest in 17th century Dutch painting. And the semester after that he took a survey course on Dutch art taught by Madlyn Millner Kahr, who became a mentor to Johnson. Johnson received the first Ph.D. minor in Art History conferred by Stanford University, and in the process he lost his first electrical engineering Ph.D. advisor, who disagreed with his decision to pursue the art history minor.

Undeterred, Johnson earned his Art History Ph.D. minor and his Ph.D. major in electrical engineering and he was off into his teaching career. He spent his first four years on the faculty at Virginia Tech and then he came to Cornell in 1981. But it wasn’t until after 30 years researching adaptive feedback systems theory and blind equalization in communication receivers that Johnson was finally able to combine his two loves.

“Ten years ago I met with a researcher at the Van Gogh Museum in Amsterdam to talk about how I could be useful,” says Johnson. From that conversation grew the first conference dedicated to applying image processing to art history. “The conference was a success,” Johnson continues, “and people started to realize that studying the materiality of an artwork computationally could tell you a lot about an artist’s creative process.”

Johnson’s first foray into what is now known as Computational Art History was focused on automating  thread counting. At the time, art historians and conservators used a painstaking process to examine the canvas underlying the paintings they study. It involved using a magnifying glass to count the number of threads in random subsections of an x-radiograph of a painting and then averaging the counts over the entire painting. Johnson showed that the process could be automated using digital signal processing algorithms to calculate thread count and create a “map” of the patterns of thread density in the canvas. In this way, it suddenly became easy to compare the thread counts and patterns of two paintings and determine if the canvas of both was cut from the same roll of cloth.

Using Johnson’s method, art historians have been able to piece together a more accurate chronology of Vincent van Gogh’s paintings, verify a painting as an authentic Vermeer, verify Diego Velazquez’s painting “Sebastian de Morra”, and consider authentication of a painting thought to be a poor copy as actually by Nicolas Poussin.  Now that the method is accepted, Johnson has moved on to a new challenge.

He is analyzing the paper Rembrandt used to make his prints. The paper was made by hand using a process involving a screen and wet pulp. As the pulp dried, the pattern of the screen was impressed in the paper. Johnson uses the information available in the screen patterns to connect separate prints back to the same paper mold.  This information can assist art historians in determining when a particular etching was printed.

Johnson is also involved in projects examining ancient imperial Chinese artworks on silk and less-ancient photographs on manufactured photographic paper. If it sounds like Johnson is a busy man, that is by design. “My self-image is the plate-spinning act on the old Ed Sullivan show?,” says Johnson with a question in his voice. “The plate spinner would get dozens of plates spinning all at once...The difference is that once I have enough plates spinning, I will walk away, knowing other people can take it from there.”

Now that Johnson has helped create a field and set it on its way, he is starting to think about what comes next. He has been contemplating writing a book on image processing for engineers and art conservators.  He is also advising a doctoral student whose thesis is on mathematical modeling of the growth of tropical agroforests (of all things!). And he is still teaching. Sitting in Johnson’s office, listening to him talk about what comes next, you can almost hear the sound of all those plates spinning, but Johnson does not seem ready to step away just yet. There is still so much to discover about art and signal processing.

As if to prove his readiness to start one more plate spinning, Johnson wrote to me after this story was complete to tell me about his next challenge. Professor Johnson has accepted a 3-year appointment at the Jacobs Technion-Cornell  Institute at Cornell Tech in New York City as the first Jacobs Fellow in Computational  Arts and Humanities. So he will continue on the faculty of the School of Electrical and Computer Engineering at Cornell and he will get to spend his days much closer to some of his beloved Rembrandts, Vermeers, and van Goghs.