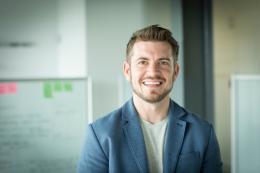 Students in Professor Robert Shepherd’s Innovative Product Design class could not have known what to expect when they sat down on the first day back in 2013.  Shepherd himself did not know exactly what to expect, either. It was the first time he had taught the class and a big part of what the students designed was going to depend on their own interests. “I have design experience and I have start-up experience, so I know what the process is like,” says Shepherd. “But I had never taught this class before, so I was learning how to do that as we went.”

Shepherd is breaking new ground in the fields of 3-D printing and soft robotics and it is hard to think of a specialty hotter than these. Shepherd and his work have been in the news a lot the past few months. He and fellow Sibley School of Mechanical and Aerospace Engineering Professor Mason Peck have received a NASA grant to fund further work on their idea to develop a soft, swimming robot suitable for exploring the harsh conditions in places like the ocean hidden under the surface ice on Jupiter’s moon Europa.

In October 2015 Shepherd received all sorts of attention for a new stretchable, lightweight material developed in his lab. The material has the potential for use in prosthetic body parts, artificial organs, and soft robotics. And in March 2016 the electroluminescent “skin” Shepherd developed made waves around Internet science sites.

On that first day in 2013 Shepherd told the students that they had been hired by the (simulated) Cornell Educational Toy Company. They were assigned to a group of three students and told they had three weeks to design and prototype an educational toy. Shepherd started with this assignment because he was not sure if students were going to come to class with ideas of their own right off the bat. This way they had a project to focus on immediately. Students were also free to ignore the toy assignment IF they had product ideas of their own.

That first semester the class was capped at 21 students, but that number has already doubled. It is essential that students in the class come prepared to try things out. “The point of the class,” says Shepherd, “is to fail right away so you can start getting better right away. Shepherd now co-teaches the class with Systems Engineering Lecturer Sirietta Simoncini and the design of the class has changed, though there is still a strong emphasis on brainstorming and rapid prototyping.

One big change in the class has been the increased emphasis on what might not sound like an engineering skill at all: empathy. Shepherd and Simoncini stress to the students the importance of asking the end-user what it is they want and need. “This is ethnographic fieldwork,” says Simoncini. “We train the students how to ask the right questions. We wanted them to learn to be a kind of anthropologist of the family, to begin without biases. This is often the hardest part of the process for them, because they have never been asked to do this before.”

Their class incorporates many of the ideas popularized by the design firm IDEO. In interdisciplinary teams students identify a need, rapidly create low-tech prototypes, test these with actual end users to get customer feedback, and then quickly use what they have learned to build the next iteration.  Students in the class have access to several 3-D printers and they learn how to program the printers to create just what they need to create their prototypes.

Class member Frances Zhu ’14 ME said of the class, “You work with your hands and create prototypes with whatever materials you have around you. You walk around public places, flagging people down to try your product. There’s a stereotype that engineers cannot socialize. But given a product they are passionate about, I have personally witnessed peers go from being soft spoken to outgoing and talkative.”

During the first semester Shepherd taught the class, many groups took his initial toy company idea and ran with it, while others developed their own non-toy ideas.  Before the semester ended they brought their prototypes to the Ithaca Sciencenter hands-on science museum, where kids tested puzzles and logic games, building machines, robots, gooey animals, and a new type of desk, all designed by groups of Cornell Engineering undergraduates. Student Georgia Crowther ’14 summed up the class by saying, “We learned about business, manufacturing, IP law, marketing, prototyping, design, management and leadership, and that a good technical education, though important, isn’t the end-all for becoming a successful engineer.”

“The class was a definite success,” says Shepherd. “Many of the students wanted to take it again because they said they did not do it right from the beginning. What that means to me is that they learned by making mistakes, which is a valuable learning tool and a lesson better learned now than on the job.”

Now in its third year, the class is hugely popular and idea of engineers as designers is firmly entrenched. As 3-D printers and other design-and-build tools become ubiquitous, engineers are going to need to know how to incorporate them into the design process. Classes like Shepherd’s and Simoncini’s Innovative Product Design class at Cornell are exactly the hands-on way Cornell Engineering students are going to learn.