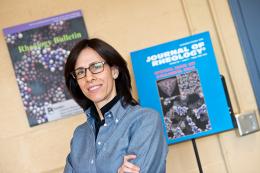 Breaking new ground to explain the behavior of complex fluids

Somewhere between the minuscule world of the atom and the one we experience as humans is another, “middle world”--larger than atoms but smaller than what the naked eye can see. Roseanna Zia, an Assistant Professor of Chemical and Biomolecular Engineering is at home in this world, studying the micro-mechanical underpinnings of macroscopic material behaviors in complex fluids and gels. “I’m really interested in that in-between place, somewhere between angstroms and millimeters, that people tend to not think about,” says Zia. “It’s fundamental to the physics of life, and to the future of materials design.”

At Cornell, Zia fuels that interest by focusing on how the motion of microscopic particles can reveal deeper insights about states of matter; for example how their motion under microcontainment, (such as one would see inside a cell), can cause them to localize; or how attractions can give rise to networks in fluids. Her studies of microscopic particles have potential applications in fields ranging from cellular disease treatment to sustainable technology.

Her research may also reveal key information on how human cells function, but from a new perspective. Her work on how nano-particles diffuse and flow within tiny compartments of fluid only 30-100 microns big can reveal much about cellular processes. “The effect of having walls so close [to the particles] can be profound,” Zia says. “This is exactly what’s going on in eukaryotic cells.” Thus, understanding how particles are affected by these close quarters could reveal key information about breakdowns in healthy cell function, such as metabolism, establishment of polarity, division, and growth. The research is so cutting edge, it requires entirely new theoretical and computational frameworks to fully understand the flow and interactions between these microscopic particles within these small compartments. Zia’s studies on the motion of particles forced through suspensions was recently selected as the 2013 Publication of the Year by the Journal of Rheology.

Another central avenue of Zia’s research is the behavior of so-called “kinetically arrested” systems of colloids–suspensions of particles whose attractive forces cause them to bond together, forming networks of particle strands. These networks can exhibit both elastic behavior---they sustain their own weight under gravity---and viscous behavior—they flow like a liquid when forced, but abruptly regain their elastic character when the force is removed. Such materials have emerged as a premier technology for designing tissue scaffolds, injectable pharmaceuticals, and embeddable dialysis-like therapies. However, such materials are hindered by several puzzling, time-dependent behaviors, such as sudden, unpredictable collapse of the entire network. Such collapse not only renders the material useless, it also has presented a puzzling phenomenon to colloid scientists for decades. Zia’s group is on the verge of publishing the solution to this fascinating problem, along with an exhaustive study of the time-evolution of these colloidal gels.

Zia arrived at this field of study via a Ph.D. in mechanical engineering at the California Institute of Technology. During her first few weeks there, she attended a seminar in a video simulation of microscopic particles jittering randomly around the screen was shown--movement known as Brownian motion, when particles constantly collide with the atoms and molecules of their suspending liquid. “I was mesmerized,” says Zia. “I thought, I want to study this for the rest of my life.” She’s fulfilled that wish. At Caltech, she researched the motion of particles in colloids, and what happens when a flow, or pressure is imposed on these complex fluids--how the particles move around when their system is no longer under equilibrium. During her post-doc research, Zia tackled two major questions--one related to how and why colloidal gels seem to evolve mechanically and structurally after they form, and another related to how these same gels can suddenly collapse without warning.

Before these microscopic adventures, she worked in a much larger-scale world--mechanical engineering in the automotive industry with General Motors. Her specialty was in a restraint system activated during a crash known as a seat belt pre-tensioner. In the critical first few milliseconds of a crash, the device quickly spools the slack from the seat belt, pulling the passengers firmly into the seat and positioning them for maximum protection from the airbags. While it was fulfilling to create technology that saves lives, Zia says, “I got tired of solving problems I knew how to solve. I wanted to work on the forefront of science, on the big questions that no one knows how to answer.”

The questions that Zia’s asking around these microscopic particles may eventually lead to some big answers regarding the origins of life--how the simple compounds formed into life’s building blocks. Ultimately, this is what Zia hopes to uncover. “Do the motions we see, the physical behaviors of the particles, the exquisite self-assembly that we see in the cell--is it an echo of how life started?” she asks. “It’s a lifelong question. We don’t even know how to ask it yet.”