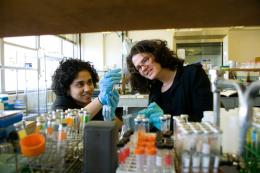 Some of Professor Ruth Richardson’s best friends are microbes. Richardson, of the School of Civil and Environmental Engineering at Cornell, keeps a 12-year old living microbial community in a see-through tube on the windowsill of her office in Hollister Hall. The tube contains water and many different kinds of microbes. The contents range in shade from a vibrant green to a midnight blue and Richardson speaks with real affection as she describes which microbes live at which levels in the 18-inch column.

The community that established itself and continued to thrive for 12 years is self-contained, with some organisms relying on the waste products of others to supply the raw materials they need to survive. The microbial community in the tube has come to a fairly stable equilibrium that benefits all of its many different individual populations of microbes.

“In general, people have a universal fear of microbes that, to me, is unfounded,” says Richardson. “The vast majority are harmless and many could be very helpful if we learn how to put them to work.”

Richardson knows what she is talking about. She has made the study of microbial communities and their possible uses the foundation of her very successful academic career thus far. Richardson, who received her B.S. in chemical engineering from Manhattan College and her M.S. and Ph.D. from the University of California at Berkeley, joined the faculty at Cornell Engineering in 2002.

One line of research in the Richardson Lab uses quantitative reverse transcription PCR, microarrays, and tandem mass spectrometry to gather information about the enzymes and other proteins being expressed by individual populations within a microbial community. By carefully examining the RNA and proteins present in a given environment, Richardson can infer whether a particular gene in a particular microbe is being expressed. One goal of this type of research is to develop a library of molecular biomarkers that are present when specific activities are happening in an environmental system or in a reactor. That way for example, if a researcher wants to know if a particular microbe is working to “eat” a particular contaminant in an environmental remediation site, the researcher just has to look for a specific set of biomarkers.

The main focus of this line of Richardson’s research is Dehalococcoides ethenogenes—an organism first isolated in a lab at Cornell in 1997 from a sludge sample taken from Ithaca’s retired sewage treatment plant. This microbe can “ingest” the harmful chemicals perchloroethene (PCE) and trichloroethene (TCE) and leave behind harmless ethane gas. PCE and TCE and other chlorinated solvents are the second-most common class of groundwater contaminants in the United States, behind petroleum hydrocarbons. Dehalococcoides ethenogenes occurs naturally in many soil systems, but it is usually present in small amounts, eking out a living on the small amounts of chlorine naturally present in the soil.

Using Dehalococcoides ethenogenes to remediate PCE and TCE spills is not as simple as dumping a bunch of the organism into the tainted soil. In any soil system, there is an entire microbial community and Dehalococcoides ethenogenes is just one organism among many in a delicate and changing balance. Richardson aims to identify biomarkers that appear when the key population is working well at a remediation site, but also when it is experiencing stresses that make it less efficient at its ‘job.’ Information like this could guide site managers to take the appropriate actions to get a bioremediation effort back on track.

In addition to her work with biomarkers and remediation, Richardson is also interested in developing efficient and productive algal biofuel feedstock. Just like her work with Dehalococcoides ethenogenes, Richardson’s research into high-lipid producing algae uses genetic information as a tool to identify high-performing marine algal strains for growth in pilot scale facilities. A third major line of research for Richardson is the development of low cost, energy-positive, robust human waste treatment systems for deployment in parts of the world without safe and effective systems already in place.

The common thread tying all of Richardson’s research together is her intimate knowledge of microbial genetics and behaviors. “Microbes in general get a bad rap,” says Richardson. “The more we learn about them, the better we’ll be able to put them to work.” When many people think of microbes they think of taint and disease. Ruth Richardson thinks of a cleaner environment and a renewable source of energy. Maybe if more people knew microbes in the way Ruth Richardson does, we would see that microbes really can be some of our best friends, too. This is not to say that a day will come when we will all have our own clear tubes filled with a ‘pet’ microbial community, but a day may be coming when microbes will be cleaning our environment, producing our fuel, and helping billions of people around the world have cleaner water.