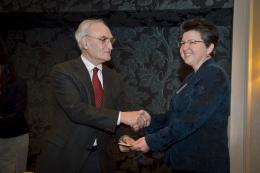 Sara C. Pryor, professor in the Department of Earth and Atmospheric Sciences at Cornell, uses direct observation, remote sensing, and numerical modeling to study the complexities of Earth’s climate system. You might think that working on problems related to diagnosing causes of atmospheric change and making climate projections could make a person quite pessimistic about the future. In Sara Pryor’s case, you would be wrong.

“My glass is certainly half full,” says Pryor. “I am very optimistic about the future. We can take measures to reduce the amount of climate change. For example, it is perfectly reasonable to assume that the way we use energy can and will change. It has before, and it will again. Equally, some change in our climate is inevitable, but our climate projections can be used to help adapt to the new climate conditions and protect the economy, human welfare, and our environment. ” Pryor believes that one essential ingredient to making accurate projections of possible future climate states is good data to help us understand the historical and current climate. “Without good data, we can not move forward on our fundamental understanding of the climate system, and we cannot improve our predictive models,” says Pryor.

One of the major challenges Pryor and her collaborators seek to address is accurate measurements of the aerosols present in the atmosphere. But it turns out that it is not easy to measure these airborne particles that range in size from 3 nanometers to 3,000,000 nanometers, and which contain thousands of different chemical compounds. They come from a range of natural and human sources--such as fuel combustion in vehicles and industrial/electricity generation facilities. Measuring this complex mixture is daunting, but is also essential to understanding how aerosols influence human health and the climate system. Some of Pryor’s measurements come from satellite-based radiometers. Some come from instrumentation she deploys at ground-based stations. She integrates those measurements with output from numerical model simulations to help evaluate those models and, ultimately, to improve them.

“Over the last decade our ability to measure aerosol particles has improved incredibly,” says Pryor. “People have realized that aerosols have large effects on climate and on human health.” It is intuitively obvious how aerosol particles can affect human health—we take them into our lungs with each breath and some of them stay there. Their impact on the climate is more complex. Aerosol particles are the base on which water droplets form to make clouds. Aerosol particles also absorb radiation and reflect sunlight back out of the atmosphere. How to quantify and accurately predict these effects--particularly at the regional scale--is beyond the scope of any one researcher. “These are big, complex questions,” says Pryor. “We need skilled, diverse, interdisciplinary teams to address them.”

Listening to Sara Pryor talk about what she does, it quickly becomes clear that she is in the right job. “I find it quite thrilling to work across the traditional disciplinary bounds,” says Pryor. “I have the best job in the world. Every day I come to work, I am reminded of how lucky I am.”

Even as a child, Pryor was interested in math and science. Her general interest became much more focused on climate when she saw the terrible effects of the drought in Africa’s Sahel in 1982. The BBC carried live images of desiccated grasslands, dying animals, and starving people. “I thought surely it must be possible to forecast droughts and limit the suffering,” says Pryor. “I really believed then that atmospheric scientists ought to be able to build a warning system--and indeed such drought warning systems exist today. That drought and the suffering I saw on television completely transformed my view of science from general interest to a specific focus on climate.” At about the same time, Pryor’s mother was diagnosed with asthma, which is strongly triggered by aerosols in the atmosphere. The two events together set Pryor on the path she is still following today.

One of the complicating factors of climate research is the interplay between forests and atmosphere. Trees release gases that ultimately form aerosols and thus contribute to cloud formation nuclei. The amount of those gases (biogenic volatile organic compounds, BVOC) released typically increases with air temperature. But what happens when temperatures are high and water levels are low? Using data they collected during the 2012 Midwestern drought, Pryor and her team found convincing evidence that trees respond to water stress by taking up less carbon and releasing fewer BVOC into the atmosphere. The decrease in aerosol particle concentrations led to even warmer, drier conditions. Gathering data and building a model to explain this one atmosphere-biosphere feedback loop is just one way Pryor’s research adds to the pool of knowledge about how the climate system works.

In other research, Pryor works on making ‘regional climate projections’ that will improve our ability to forecast long-term effects of climate change on specific locations. “I want to be able to create actionable climate projections that allow people to plan for, and even offset, some of the challenges presented by climate change,” says Pryor. It was for her work in this arena that she was appointed to the federal committee that put together the 2014 National Climate Assessment. Pryor was very proud to contribute to that landmark report, and thinks it shows she can make a real difference.  “The best way I can help in efforts to combat climate change and reduce its effects is by doing good science and expressing my results clearly,” says Pryor. “If we give clever people good information, they can make appropriate policy.”

In February, 2015 Pryor was inducted as a Fellow of the American Association for the Advancement of Science. The AAAS recognized Pryor for her “distinguished contributions to climate science with particular emphasis on regional drivers of, and manifestations of, climate change and variability.” The photo above shows Pryor being inducted as an AAAS Fellow by Gerald Fink, Chair of the AAAS Board and Professor of Genetics at the Whitehead Institute at MIT.