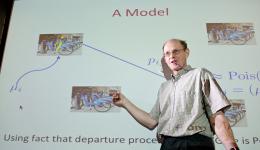 Shane Henderson says that he has always found pure math annoying. “Don’t get me wrong,” he says, “I have always liked math, but I have also always needed some reason to see why I should care—something useful in the real world.” Henderson, who is now a professor in Cornell Engineering’s School of Operations Research and Information Engineering, continues, “My main motivation is to think about stuff I care about.”

It turns out, the “stuff” Henderson cares about is “stuff” a lot of people care about: how to deploy ambulances and fire equipment in the most efficient way possible; how to distribute bicycles most effectively in New York City’s bike share program; how to schedule MRI appointments for patients in a way that minimizes waiting times; how to get people to be more knowledgeable consumers of data, probability, and statistics.

Henderson was born in New Zealand and lived there until he received his undergraduate degree in mathematics from the University of Auckland in 1992. In the final year of his undergraduate studies, Henderson took a class in Operations Research and, he says, “it just clicked.” He decided to come back and complete an Honors year at Auckland with a focus on the math behind Operations Research. “During that Honors year I saw people who were going off to graduate school,” says Henderson. “Before that, I hadn’t really thought about an advanced degree. In a way, I have been very lucky. All along the way there have been people laying out the possibilities and those possibilities have opened so many doors for me.”

The next door that opened for Henderson was his acceptance into Stanford for a Master’s in statistics and a Ph.D. in operations research. “In New Zealand, everyone is a generalist,” says Henderson. “Stanford gave me a chance to specialize and really immerse myself in the theory behind the practice.” After earning his doctorate from Stanford, Henderson began teaching at the University of Michigan.

While Henderson himself still sounds a bit surprised that he became a professor, his family might not find it so unusual. “Growing up, my first nickname was Walter Mitty because I seemed to be daydreaming a lot,” says Henderson. “And then my family all started calling me ‘Prof’ because rather than just diving into something like most kids do, I would consider things first. We had a toy with differently shaped blocks and holes and rather than just cramming shapes into holes, I would think about it deeply first and then very systematically place the shapes in the proper holes.”

One year into his teaching career at Michigan, “Prof” had to return to New Zealand for complicated work visa reasons. While back in New Zealand, he had a chance to put theory into practice by consulting with many companies. It was during this time in Auckland that Henderson began his work with ambulance service planning—a line of research that was very fruitful for Henderson. One system that grew out of the work Henderson did during this time was licensed and subsequently bought by a company, The Optima Corporation, and is now in use in many cities around the world to this day.

After three years at Michigan, Henderson came to Cornell in 2001. “I wasn’t actually looking for a new position,” says Henderson. “I came to Ithaca to visit a friend at the Johnson School and while I was here I saw what an incredibly strong school ORIE was. I was so impressed by the combination of terrific research and real humility. People were doing excellent work without making a lot of noise about it and I really liked that.” In his years at Cornell Henderson says the biggest change he has seen in ORIE has been the move away from being a real bastion of theory. “We have not lost any of our strength in the theoretical side, but we now have people spanning multiple fields and we are application-driven. It is an exciting place to work.”

Henderson’s students certainly benefit from this combination of theory and practice. In his basic Engineering Probability and Statistics class (ENGRD 2700) Henderson brackets each of the topics he covers, (including random variables, probability distributions, expectation, estimation, testing, and regression), with real life examples of how these topics are useful and how they are often misreported in the media. “College courses in statistics typically come in two flavors,” says Henderson.  “Either they have a very theoretical focus with little application in the real world, or they are application driven, but students do not get a deep understanding of the underlying math. This choice in focus seems like a “rule” that is just begging to be broken. I am ambitious with my students--I want both! That way, students will be equipped to face not just the situations they have seen before, but new ones as well.”

Henderson’s students certainly appreciate his efforts to make the material more relevant. He has won numerous teaching awards during his fourteen years at Cornell. Most recently, Henderson was awarded the Sonny Yau ’72 Excellence in Teaching Award.

When discussing what comes next, Henderson speaks of the rise of the sharing economy and services such as ZipCar and AirBnB. “In any of these situations where you have distributed users and distributed resources, effective matching is essential,” says Henderson. As he talks, you can practically see ‘Prof’s’ wheels turning, wondering how to use math to help improve something people care about.