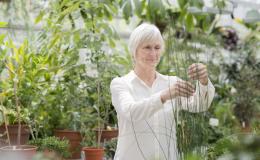 Susan Riha, the Charles L. Pack Professor in the Department of Earth and Atmospheric Sciences at Cornell, studies the dynamic interactions between plants and their immediate physical environment. This fact might have come as a surprise to the 19 year-old Susan Riha, earning her undergraduate degree in comparative religions. If you were to travel back through time to Smith College in the late 1960s and tell that Susan Riha that she would one day be a leader in the field of soil-plant-atmosphere interactions, she would have been skeptical.

“I was interested in everything,” says Riha from her office on the top floor of the tallest building at Cornell, Bradfield Hall. “I majored in comparative religions because I wanted to know more about the history of ideas and how people think about the world. But then during my senior year I started to edge more into science.” Riha began to think seriously about the limits to the growth of the human species on Earth. She became increasingly interested in agriculture and enrolled in a Master’s program in soil science at UMASS-Amherst.

Perhaps it shouldn’t be surprising that the science Riha found herself edging toward was soil science. Her great-grandparents had immigrated to a farm in Vermont, coming from the Isle of Mull in Scotland, and were strongly attached to the land. “I have always been drawn to applied and interdisciplinary science,” says Riha. “Most basically, I wanted to know how we were going to feed all the people in the world.”

After attaining her Master’s from UMASS, Riha taught for a short stint at Hampshire College in Massachusetts. She realized early in her tenure at Hampshire that what she really needed was to go on and get a Ph.D., so Riha enrolled in the doctoral program in soil science at Washington State University. “It was a bit traumatic for me at the time,” says Riha. “It was so different from the East Coast in so many ways. I was the first woman in the program and that was as hard on them as an institution as it was on me.”

Perhaps unsurprisingly given the location of her doctoral program, Riha began work on a project funded by Weyerhaeuser Paper to build a model of the path nitrogen took through the forest environment. The project coincided with the release of the first microcomputers. Riha and her advisor, Gaylon Campbell, understood the value computers could have in processing the data they hoped to collect from forest soils, air, and trees. They were pioneers in the field of using biophysical models to analyze data collected in growth chambers, greenhouses, and the forest. In fact, Campbell and his brothers began a company, Campbell Scientific, to build sensors that would allow researchers to take full advantage of the coming computer age.

Riha earned her Ph.D. and joined the faculty of the College of Agriculture and Life Sciences at Cornell in the Agronomy Department. When she joined, the department had a ratio of 40 male professors to one female professor—Riha herself. “It was the 1970s and there were some men in the department who did not want a woman as a colleague,” says Riha. “Things have changed a lot since then.”

One thing that has changed has been the field Riha is a part of. “When I started, I had a forest soils position,” says Riha. “Over time, it became more of a soil and crop sciences position.” Today, Riha’s endowed Charles L. Pack professorship is in the Department of Earth and Atmospheric Sciences. Another change is that more than a quarter of the tenure-track faculty in the department are female. (Nationally, the average is closer to 15 %.)

Using biophysical models, Riha has looked at the impacts of flooding on plant-water relations, the impact of soil drying on plant growth and water use, and the importance of different surfaces to vapor transport under various crop, forestry, and agroforestry systems. Having built expertise in the creation and application of these biophysical models, Riha is now turning her attention to using plant-environmental models to address important applied problems facing the world. Some of these problems are the response of agriculture to climate change, the impact of climate variability on crop yields, improving the use of stored soil water in different cropping systems, predicting the influence of climate change on weed-crop competition, and optimizing the use of plants to remediate polluted soils.

A developing line of research for Riha is to gather data to piece together a model for predicting the relationship between climate conditions and gene expression in corn plants. “Right now there is a gap in current knowledge linking a plant’s genome to its behavior in a specific environment,” says Riha. “We have sequenced the full genome for many cultivars of corn, but we have only rough measures of differences among cultivars’ performances in the field. We need to gather much more data to be able to relate the plant genome to a plant’s response in a given environment.” In building a current understanding of the interplay between local climate and gene expression, Riha hopes to have an impact on future food production through discoveries that will guide both plant breeding programs and water management methods.

“My goal is to see how we can breed corn and other food crops to respond to climate change. We need to sharpen our models because better management can make a big difference in how much food we will be able to grow,” says Riha.

Throughout the conversation it becomes clear that Riha is not a person to shy away from a challenge. It is equally clear that she is determined to follow her interests, wherever they take her. She did this as an undergraduate when she discovered her love of science. She did it when she was the only woman in her doctoral program at Washington State and in the department of agronomy at Cornell. And she is doing it again today at the forefront of a new field that might be called climate plant genetics.

When she is not at work thinking about the complex interplay between plants and the atmosphere, she can often be found in her own garden, putting her research to good use.