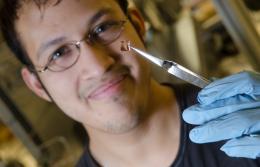 Breaking rules to inspire the next generation of engineers

At least once a week Brian Calderon, doctoral student at Cornell Engineering’s School of Electrical and Computer Engineering, plays with Legos. He does this not solely because it is fun, (though it is, indeed, fun). He does this also because it is a great way to teach young children about engineering. Calderon grew up in a small farm town in southern Ecuador.  His family were immigrants and had no history of attending college. “My father is the one who got me interested in math and science,” says Calderon. “He used to teach me math by having me convert the weight of our crop into a money value. He is a huge part of why I am an engineer.”

Calderon moved to the Bronx after attending an engineering high school in Ecuador. Even then, he was already finding ways to give back. “I used to teach English for free whenever I went back to my hometown in Ecuador.” Calderon and third-year mechanical engineering graduate student Timothy Lannin are co-coordinators of Cornell STOMP, which stands for Student Teacher Outreach Mentorship Program.

“It is something I have been doing since I was an undergraduate at Rensselaer Polytechnic Institute,” says Calderon. “Life gets really busy as an engineering grad student, so STOMP lets me talk to someone who is not a beaker.”  This semester STOMP is working with students from Cayuga Heights Elementary School and from the Northern Lights Cooperative Homeschool Learning Center. “It is an after-school program and the kids love it. Some of them really take off with it and they end up teaching me stuff,” Calderon says with a smile.

The STOMP group is part of a larger effort at Cornell called Encourage Young Engineers and Scientists (EYES).  The group’s mission is to promote scientific literacy by bringing engaging hands-on activities to local students. What could be more hands-on than building with Legos?  And it is not just the traditional plastic Lego building blocks of 20 years ago. The kids enrolled in this program get to use Lego Mindstorm kits.

Mindstorm is a set of sensors, motors, and a programmable module that lets kids build and program simple Lego robots. “One robot we built included an ultrasound sensor that allowed us to drive our robot using echolocation, based on the proximity of the driver’s hand. The kids thought it was really cool,” says Calderon. “I have always liked doing something for other people. It feels good. STOMP gives me a chance to be philanthropic and to teach engineering.”

When not working with school kids and Legos, Calderon researches methods for depositing a layer of boron nitride onto graphene, where it can act as an insulator. The excitement Calderon shows when talking about introducing kids to engineering is also clearly evident when he discusses his research. “Where we are with graphene now is a lot like the early days of silicon. This material holds huge promise.”

Calderon hopes to finish his doctoral program in 2015. Between now and then, the students of Ithaca’s schools can expect to find him on the floor with them, programming Lego robots and inspiring them to explore science as a possibility. Calderon also hopes to inspire some of his engineering colleagues to join him in STOMP. “The learning curve is not steep. If you can program HTML or C++, then you are already above-and-beyond qualified to teach these kids. It feels so good to give something back."