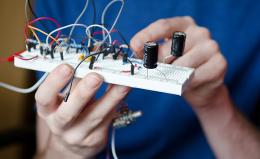 The first rule of Maker Club is that there aren’t rules about what you make in Maker Club. Because this is the case, club president Alex Jaus ’15 has a bit of a hard time defining what Maker Club is. His eyes roam around Duffield Atrium, as if searching for just the right words to describe the club he leads. “Maker Club is a lot of things,” says Jaus. “It is hard to describe because it is really flexible. The point of the club is simply to make things.”

Cornell Engineering has a long history of popular student project teams that compete nationally and internationally with teams from other engineering programs—often with great success. The students who join those teams work together on one overarching project whose form and function are determined by the rules of the competition. The technology they create—an autonomous airplane, an unmanned submarine, a Baja-style race car, a Mars Rover, a concrete canoe—competes against similar projects created by student teams from other schools.

But what about that student who has her own ideas about what she wants to make? Short of buying her own equipment, finding an unused fabrication space, and setting time aside on her own, what can she do to explore her own ideas? Now she has an outlet. She can join Cornell Engineering’s recently formed Maker Club. On the group’s website, they describe their mission as “to provide a space where motivated and creative minds can give shape to their ideas, and to help spread this passion through the campus and beyond.”
The club began less than two years ago, when M.Eng student Hanna Lin ’14saw that there was no university-recognized club whose goal was simply to explore technology and give students a place to learn new hands-on skills and use them to give form to their ideas.

Lin coordinated the setup of the clubroom and the acquisition of tools, obtained 3D printers, and helped to codify the training protocols that allow new members to learn how to use new tools and equipment. The club applied for, and was granted, official University recognition as a student-run social club. Lin has since graduated, but the club has taken on a life of its own without her.

Bruce Land from the Department of Electrical and Computer Engineering has agreed to be the faculty advisor for the group.  They now have a dedicated space in Room 211, Phillips Hall. They are slowly building a stockpile of useful tools and equipment, including a 3D printer. Club President Jaus is excited about the prospect of growing the membership this year. “That first year, there was just a small group of dedicated people and we had to figure out how to actually become a club,” says Jaus. “This year, we ran out of information cards at the beginning-of-the-year Club Fest and we had 30 or 40 people come to our initial meeting.”

The growing popularity of the Maker Club reflects what is happening in the larger culture. The standard-bearer for the movement is Make magazine, which first came out in 2005 and has grown in circulation with every issue since. Make began hosting Maker Faire in 2006 “to celebrate arts, crafts, engineering, science projects and the Do-It-Yourself (DIY) mindset." In the eight years since that first Maker Faire was held in San Mateo, California the event has expanded. There were more than 100 Maker Faire’s held in 2014. The Maker Faire in New York City this year attracted more than 75,000 people, including Jaus and several other members of the Cornell Maker Club.

The maker movement is characterized by learning through doing in a social environment. Cornell’s Maker Club shares these characteristics. “It is a creative environment that allows people to work together and helps people reach their goals,” says Jaus. “Many of the project teams on campus are looking for people who are very experienced at a particular skill. We are different in that you can join without any experience and you can learn.” Jaus continues, “Collaboration is a big component. We provide a space where people can find others with similar goals and interests and they can teach and learn from each other. We don’t hold anyone to a particular expectation—it’s up to the people working on a project to make it happen.”

ECE major William Voge ’16 is Lab Manager for the Maker Club. “I joined the club because I felt there was a void in my studies and this organization was the perfect way to fill it,” says Voge. “I felt like there was a collective want to make projects with everything we’ve learned in our courses and show off what we as students can do.” By the end of the conversation about Maker Club with Alex Jaus he has found the exact right words to describe Maker Club: “This club exists so people can make the things they want to make and learn the skills they want to learn.”