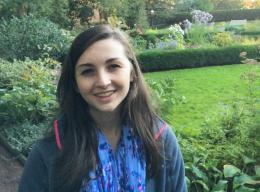 Elizabeth Weiss, a junior in the Nancy E. and Peter C. Meinig School of Biomedical Engineering at Cornell, failed her first high school biology test, and she is still somewhat grateful about that.

“Until that class and that test,” says Weiss, “school had always been pretty easy for me. I really liked math and science and had never had to work all that hard. When I failed that test it slowly dawned on me that I had not ever learned how to study.” Rather than get down on herself or give up, Weiss worked with her biology teacher, Dr. Donald Dosch, to learn how to summarize complex processes for herself.

Weiss had always broken the usual rules about what people study at what particular ages and been on a bit of “a unique educational trajectory,” (her words). Her teachers were not always sure what to do with her. Mostly what they did was make accommodations and stay out of her way as she devoured new math concepts and mastered new skills. She skipped fourth grade entirely. In ninth grade she heard about the Illinois Mathematics and Science Academy (IMSA) in Aurora. It is a highly selective residential high school for Illinois students in the tenth, eleventh, and twelfth grades.

She applied, got in, and moved to Aurora. And then failed that first biology test. “It was very stressful at times. That first semester was rough,” says Weiss, “but totally worth it.” In addition to learning how to study and understand challenging concepts and processes, Weiss also got her first exposure to research. As a rule, you are not likely to find 15-year olds in high-powered academic research labs, but that is exactly where you would have found Elizabeth Weiss in her junior year of high school.

“The school had no classes on Wednesdays for juniors and seniors and you had the option of doing research,” says Weiss. “I worked in a lab at Northwestern University that was focused on gene therapy for glioblastoma.” (It is a safe bet that fewer than one high school junior in a million could speak that sentence truthfully.) In conversation with Weiss, it is evident she understands and appreciates what a rare opportunity she had at IMSA. “It was very important that I was able to have that experience,” says Weiss. “I was in a great lab with a great group that taught me a lot about what it meant to be in science. They not only helped me throughout my project, but also taught me other protocols so I could experience as much as possible. It changed my life.”

When it came time to decide on a college, Weiss knew she wanted to go to a school where research was important. Cornell named her a Hunter R. Rawlings III Cornell Presidential Research Scholar and that helped seal the deal. The Rawlings Research Scholars Program supports a select group of undergraduates from all of the colleges at Cornell. It provides each scholar with a generous research support account and other financial aid. Rawlings Scholars collaborate with a faculty mentor to design and carry out an individualized program of research.

Weiss worked with Professor Julius Lucks, of the Robert Frederick Smith School of Chemical and Biomolecular Engineering (CBE).  Her project with Lucks focused on biomolecular engineering of RNA gene regulatory mechanisms. Before Weiss’s junior year at Cornell, Professor Lucks took a new position at Northwestern. Weiss wanted to continue to do research that would help her grow as a scientist, so she sent a few emails to professors whose work she found interesting.

Weiss found a spot in the lab of BME professor Claudia Fischbach-Teschl. The Fischbach-Teschl Lab “applies multidisciplinary strategies to gain a better qualitative and quantitative understanding of the microenvironmental conditions fundamental to the pathogenesis and therapy of cancer.” Tapping into her previous experiences in other labs, Weiss was able to offer some real expertise in the design and implementation of a project looking at the difference in gene expression in bone cells under normal conditions and when tumor factors are present. “It feels good to make real contributions to the work of the lab,” says Weiss.

When Weiss started at Cornell, she knew she liked research too much to ever give it up. She also knew she harbored a lifelong fascination with being a medical doctor. She credits the structure of the BME undergraduate curriculum with helping her decide what comes next. “The way the curriculum is set up, it forces you to try out all the many different areas covered by biomedical engineering,” says Weiss. “For me, this really has been essential. It made me see some things I would never have tried. If you had asked me year ago I would have said imaging was the last thing I would want to do. But now, it feels like something I want to pursue.”

Weiss’s plan now is to apply to joint M.D./Ph.D. programs that take from seven to eight years to complete. “The programs that exist generally sandwich the Ph.D. part into the middle years, so a person doesn’t just get one degree and then leave,” says Weiss. “I’m thinking about getting my Ph.D. in biomedical engineering with a focus on imaging and instrumentation—specifically I’m considering computer aided diagnosis,” says Weiss. Admittance to joint M.D./Ph.D. programs is very competitive, with a limited number of positions available nationally. In this way, Weiss is continuing along that same unique educational trajectory she started on by skipping fourth grade.

“Ideally,” says Weiss, “I can end up working in a teaching hospital. I love mentoring.” Behind these words, you can almost see Weiss sitting with her high school biology teacher as he helped her figure things out…