Engineers for a Sustainable World 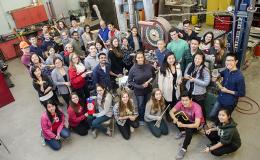 Thanks in part to Cornell Engineering alumna Regina Clewlow, engineering undergraduate students who want to use their knowledge and skills to do some good don’t have to wait until they graduate and get out into the work world. In fact, they can have an impact on real people with real problems right away by joining the Cornell chapter of Engineers for a Sustainable World.

In 2001, Cornell Engineering Master’s student Clewlow started work on the creation of a non-profit national organization she called Engineers Without Frontiers USA. By the spring of 2002, chapters of this new organization had formed at Cornell and Penn State. Before 2002 ended, there were chapters all around the country. Clewlow was the group’s executive director for the first 6 years and oversaw rapid growth, along with a name-change to Engineers for a Sustainable World (ESW) in 2004.

These days, Regina Clewlow is a Research Scholar at Stanford University, where she focuses on the energy use and climate impacts of urban systems, with a particular focus on transportation and residential energy use. She is no longer involved with Engineers for a Sustainable World, but it is clear that the group she started is thriving here at Cornell and around the world.

In fact, the Cornell affiliate of ESW had 127 applications for 24 openings this year.

Adarsh Jayakumar, a junior in the School of Electrical and Computer Engineering, says “ESW gives me a way to apply what I am learning in the classroom to the real world.” Mark Henry, a senior in the Sibley School of Mechanical and Aerospace Engineering, agrees. “I was looking for something where I could learn more about design and development and the Solar Solutions and Renewable Design (SSRD) team of ESW gave me what I was looking for.” The iterative nature of the projects ESW works on appeals to sophomore Sarah Barr Engel, as well. “Because our projects continue year to year, you can go back and improve the work a few times.”

Of course, Cornell Engineering students have many other outlets for their growing technical skills. Why, then, do so many of them want to be part of ESW? After all, they could be honing their abilities on any number of other Student Project Teams with long records of success. “It’s not just about design for me,” says Henry, “I also want my work to be for a positive social cause.” The other leaders of the group gathered around the table all shake their heads in agreement. This is a group that takes its mission statement seriously: To forge innovative, lasting solutions to local and global sustainability challenges.

The people at the table are all members of ESW’s brain trust known as the EBoard. In addition to Jayakumar, Henry, and Engel, others discussing ESW include Kevin Keene, (senior majoring in civil and environmental engineering), Eugene Ng, (senior majoring in mechanical and aerospace engineering), and Nick Serger, (sophomore planning to major in mechanical and aerospace engineering). There is an easy give and take among the group and it seems obvious that they are used to working together and listening to each’s opinions.

Henry stresses that this collaborative approach is something that is integral to the way ESW operates. “ESW works hard to follow an open, collaborative, inclusive model of decision-making,” says Henry. Serger agrees. “ESW is much more flexible than many of the other Project Teams. We don’t have a set thing we need to build each year. If I am passionate about a new project, I can make it happen.”

The projects that ESW members are passionate about lately include human powered electricity generators; solar cookers, dryers, autoclaves, and distillation systems; a solar-powered informational kiosk with a tv monitor to replace the many papers and cards distributed by clubs and other groups on campus; and biofuel created from waste fats, oils, and grease. And it’s not just students who are passionate about the work done by ESW; the group also has two active and involved faculty advisors. Professor Ruth Richardson from the School of Civil and Environmental Engineering (CEE), is an expert in biofuels, and Tim Bond, also of CEE, works closely with the Human Powered Electricity Generators (HPEG) and the Solar Solutions and Renewable Design (SSRD) teams.

Bond has accompanied members of the SSRD team on several trips to Sabana Grande in Nicaragua, where they work with a women’s collective to implement and publicize renewable, sustainable solutions to energy needs in the rural area. One important focus of their work has been designing and improving solar cookers and dryers. The environmental and health costs of collecting wood and cooking over an open flame are high. The solar ovens have had a markedly positive effect on life in Sabana Grande.

Members of ESW will travel to California later this year for the Engineers for a Sustainable World National Conference in Berkeley, where they can compare notes and trade ideas with other ESW chapters. This year’s EBoard is excited about the current projects and the outlook for the future of ESW at Cornell. Their membership numbers are high, people are committed to working hard on their projects, and the world seems to have caught up to Regina Clewlow’s realizations about the importance of sustainability.