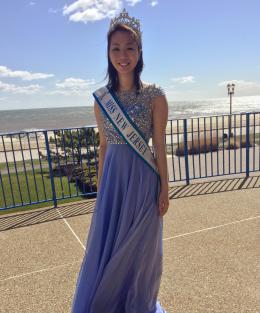 Breaking rules and challenging stereotypes to create a better future

Sophomore Jerica Huang’s life has been punctuated by a series of epiphanies. The Cornell Computer Science major, who grew up in Monroe Township in central New Jersey, remembers being the only girl in her early elementary school years who liked math and science. Because she was the only one, she learned to hide her interest in the subjects. But then, in middle school, something changed.

“I had a math teacher named Maria Steffero and she is, to this day, my greatest inspiration,” says Huang. “She has such a vibrant energy and contagious passion for math! I knew I loved math, and back then I loved art too. But I was always made to feel that the two were unrelated. In my Algebra I and Geometry classes, Dr. Steffero showed me how math and art can complement each other through things like tessellations, graphs, fractals, works by artists like Escher and da Vinci, and even in nature.” Huang has been challenging stereotypes ever since.

Steffero helped Huang see that math is, in a way, the key to understanding the physical world. She decided to put mathematics to work for good in the world. “I decided I would become an engineer.,” says Huang. “Dr. Steffero helped me discover my calling and inspired me to pursue it.” The zeal for engineering and the intersection of math and art are still alive in Huang today; she still practices art of various forms (digital art, graphic design, DSLR photography, figure skating, ice dancing, and piano composition) and is pursuing a minor in Computing in the Arts.

Another formative insight came to Huang when she was a junior in high school. “I joined my school’s Model UN delegation,” says Huang, “and I remember in my first conference, I was struck with the realization that a group of thoughtful, committed citizens with heart and a bright vision for the future can change the world.” This realization took root in Huang and it has affected her decisions ever since.

As a freshman at Cornell, Huang attended her first hackathon: BigRed//Hacks Fall 2014. “I was hooked right away—in fact, I have done twelve hackathons, became a PennApps Fellow, and won first place in Cornell’s Random Hacks of Kindness 2015.” When asked what it is about hackathons that she finds so compelling, Huang answers quickly and it is clear this is something she has thought about before: “I was able to experience right away how coding and computing can have a real, tangible impact in people’s lives. It opened my eyes to the true potential of computer science, beyond just the theoretical concepts and class programming assignments. I was exposed to hackathon culture, which promotes the creativity, rapid innovation, and social impact potential also inherent in the computer science field.”

Huang wanted to help other people discover the joys of hacking, so she has become an event organizer and web developer for Big Red//Hacks. She designed the event’s landing page and iconic clock tower/Wi-Fi symbol logo, helped manage logistics and promote campus presence for the event, and worked with a dedicated team to develop a high-utility hackathon management web application to help manage the event each year.

While still in her freshman year, Huang made a decision that changed her life. She applied to the Cornell Engineering Leadership Certification Program and was accepted. This program is a selective year-long experience that challenges engineering students to go well beyond their technical education and explore questions of purpose, values, ethics, and integrity. “So much about the program resonated with me,” says Huang. “I spent a year learning and thinking about qualities of great leadership, and I realized I needed to challenge myself if I wanted to have the impact that I desired on the world.”

To say that Huang followed through on her wish to challenge herself is to put it mildly. “I have a very reserved personality,” says Huang. “But I was so inspired and energized by the Leadership Program that I wanted to do something experiential that would allow me to work towards my vision for a better future while improving myself along the way.” The ‘something’ Huang chose to do was to compete in the 2015 Miss New Jersey USA Ambassador Pageant.

“It is the most nerve-wracking thing I have ever done,” says Huang. “I thought about it for months, actually, and there were even times when I hesitated. But then, a week before the pageant, I found myself with the sealed registration form in hand, about to drop it into the mail box. And when I did, it went through my mind: ‘okay—this is it—you are really doing this. There’s no turning back now.’” Huang says much of the preparation was internal. She looked inside herself to identify her compelling purpose, which was an extension of the work she did for the Engineering Leadership Certification Program. “Pageantry became my platform to advocate for the causes I care deeply about, such as ending the stigma surrounding mental illnesses and promoting Girls Who Code. It also helped me learn the most important lessons about living confidently and embracing my individuality.”

During the competition, Huang competed in the three main phases: Interview, Evening Gown, and Onstage Chat. She also entered the academic achievement and community service optional competitions and showcased two of her talents: performing slam poetry (while solving a Rubik’s Cube in under two minutes!) and playing a piano composition. Through it all, Huang got the chance to talk with numerous judges and contestants about her passion for helping marginalized people feel included in a world they are still so often excluded from.

In the end, Huang won and was crowned Miss New Jersey Ambassador Teen 2015 and went on to compete and place in the top 5 finalists for the national title.

Since her victory, Huang has started her sophomore year as a Computer Science major, taken a coveted spot as a Teaching Assistant for the next cohort of the Engineering Leadership Certification Program, won a Microsoft Scholarship, won Google’s Anita Borg Memorial Scholarship, been invited to Google’s exclusive technical development program called CodeU (which will allow Huang to attend a retreat at Google headquarters this summer and work with a mentor throughout the year), been named a Grace Hopper Scholar (which enabled Huang to attend the Grace Hopper Celebration for Women in Computing), helped run a successful BigRed//Hacks Fall 2015, and accepted a software engineering internship at Microsoft for the summer of 2016. It has been quite a year.

Huang is excited to continue learning about computing, both at Cornell and through her experiences with Microsoft, Google, hackathons, and other extracurricular activities. But she is just as excited to continue to explore applications of authentic leadership and learn more about her purpose, values, ethics, and integrity. “Technology has the power to improve people’s lives,” says Huang. “And when technology is mingled with the courage, heart, and fearless vision that comes with leadership, the world is open to endless possibilities. I want to continue to develop technologies that are inspired by my values and compelling purpose, and hopefully inspire others along the way.”

Huang’s year as the 2015 Miss New Jersey Ambassador Teen is coming to an end, but she has decided to continue her pageant career by competing in the Miss America system. She has already begun fundraising for the Children’s Miracle Network Hospitals and she is practicing her talent. In conversation, Huang seems fully aware that pageants are not something most people associate with people who code. She also does not seem to care at all. She revels in the opportunity to challenge stereotypes and is going to continue to do what she does. “My goal in life is not to life forever, but to create something that does. While I’m not entirely sure what this ‘something’ will be, I hope that it will grow out of both my technical skills and my leadership skills and become the mark that I leave on the world.