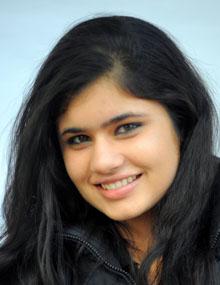 "I had never programmed before I came to Cornell," says Jisha Kambo '14. "I thought I wanted to study physics. But then I took my first computer class freshman year and I loved it." It sounds odd to hear Kambo say she had never programmed before, since she is the founder and president of the student group Women in Computing at Cornell (WICC).  In three short years she has gone from never having coded in her life to working a summer internship and coding for Google.

The fact that Jisha Kambo finds herself at Cornell Engineering in the first place is a little bit surprising. "I went to a math- and science-focused high school in India for two years," says Kambo. "My dad is a civil engineer and I have always loved math and science. I knew I wanted to be an engineer, but I never planned on coming to the United States to study."  Kambo was accepted into a very competitive engineering school in India, but at the urging of her aunt, she agreed to explore what Cornell had to offer. "When I looked at Cornell I saw it gave me global exposure and access to many enriching experiences. I saw that Cornell had one of the best engineering programs in the world and I didn't want to miss out on this golden opportunity," says Kambo.

Even after that first computer class freshman year, Kambo had her doubts about choosing computer science as her major. "I knew all the stereotypes about computer engineers, so I still was not sure what to do," says Kambo.  "I talked to more than 20 CS majors who were upperclassmen and they shared with me why they chose to study CS and what they thought they could do with it.  They helped me see that the only thing holding me back was the fear of being inexperienced, and that I actually loved programming, so why would I do anything else?" says Kambo.

Kambo joined the Society of Women Engineers at Cornell and quickly discovered there was no Cornell group focused solely on women in computing. Kambo approached administrators, professors, and fellow students about this glaring omission and found there was great interest in starting an organization on campus. Eva Tardos, the Jacob Gould Shurman Professor of Computer Science at Cornell, agreed immediately to be faculty adviser for the group Kambo proposed.

A survey was sent, meetings were held, and before you know it, Women in Computing at Cornell was up and running. "There was a great turnout at our kickoff event; a lot of faculty showed up and we showed the documentary She ++, about women in the technology sector," says Kambo. "Corporate recruiters have been very supportive.  They have been contacting us. They want to come to Cornell to host events targeted to women."

WICC is not even one year old and already there are more than 100 members on its list serve and 15 active board members.  Cornell alumni who now work for Google, Microsoft, and Facebook have presented panel discussions. Plans are in the works to co- host a weekly computer science workshop with the national group Girls Who Code for high school girls in Ithaca starting in early February. Kambo says there are 3 goals for WICC: "We want to bring together women in computing and build a sense of community. We want to provide support, mentorship, and expanded opportunities for women in CS. And we want to reach out to young girls and give them a more holistic view of Computer Science to quash the stereotypes that may hold them back." Kambo's excitement about the mission is evident on her face and in her voice. She feels strongly about opening the field of Computer Science to more women.

Less than 12% of the bachelor's degrees awarded in Computer Science nationally in 2011 went to women. Women comprise 20% of the computer science majors at Cornell, but Kambo would like to see that number grow. "We need to encourage girls to start thinking about CS long before they get to college. And once they are here we need to support them and help them advance in the field," says Kambo, eyes shining with the passion of a leader. "With CS, there is potential for real impact in the world.  That small piece of code can have a big impact on millions of people."