Breaking rules to learn by doing 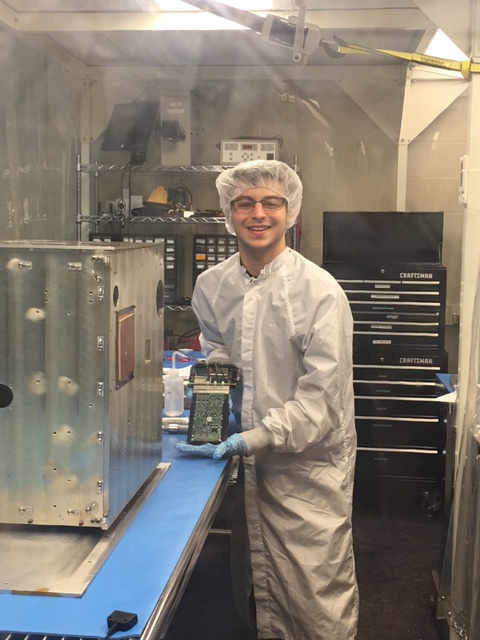 When Padraig Lysandrou has a few spare hours, he works on a space lander he is building in his apartment. “I’ve never done a project this big,” says Lysandrou, who is a senior majoring in electrical and computer engineering (ECE) at Cornell. “It’s probably going to take me a few years, but it’s what I like to do and it’s how I learn.”

Lysandrou’s way of learning might break the traditional rules of higher education, where you take a lot of coursework to learn the basics and theoretical underpinnings of a field before tackling complex challenges, but it has served him well at Cornell.

During a recent 60-minute conversation in Gates Hall it becomes clear that Lysandrou might just be the epitome of someone who learns by doing. “When I was a kid my parents got me a remote control car and I played with it for a day or two and then I took it all apart to see how it worked.” At the age of twelve Lysandrou stumbled across the YouTube Arduino tutorial series created by Cornell Engineering alumni Jeremy Blum ’ 13 M. Eng.,'12  B.S. “I dove right in and learned so much from those videos,” says Lysandrou.

He built a shop in his family’s basement where he could tinker and build to his heart’s content. Lysandrou learned all he could about tube electronics and restored old radios. He also built Tesla coils and a particle accelerator. Oh, and he built rockets. “At first they were pretty simple,” says Lysandrou. “Then I started to apply the electronics I was learning to rocketry.” Through high school, Lysandrou was entirely self-taught when it came to rocketry and electronics.

When it came time to decide on a college, Lysandrou remembered that Jeremy Blum (from the Arduino videos) had gone to Cornell, so he wrote to Blum. “Jeremy wrote back and he encouraged me to apply to Cornell,” says Lysandrou. “I was also interested in Applied Physics and I knew that Cornell had a great department, so I applied.”  He was accepted and started work in the Space Systems Design Studio right away.

Lysandrou found that Cornell Engineering fit his preferred way of learning. “If you look at my resume you’ll see that it doesn’t focus on coursework—it really just shows projects I have worked on. 99.9% of what I have learned has come from projects and every job offer and internship I have ever gotten has grown out of my project work, not my classwork.”

At Cornell, Lysandrou found a place where the opportunities to work in a space systems lab and to pursue projects and to lead a Maker Club were readily available and allowed him to continue to learn what he needed to learn. Cornell Engineering has recognized the value of an experiential curriculum and students have numerous opportunities to learn and to do outside of the classroom.

While at Cornell, Lysandrou worked with Professor Mason Peck as the avionics lead for the Violet nanosatellite team. He was avionics lead on an artificial gravity cubesat designed in the lab of Professor Daniel Selva. Lysandrou was also a systems engineer on a constellation of Synthetic Aperture Radar imaging nanosatellites designed at Cornell. In his summers he worked at SpaceX and Blue Origin.

Rather than leave Cornell after earning his B.S. in electrical and computer engineering, Lysandrou has started work on his M.Eng. degree in aerospace controls. Following completion of his M.Eng., Lysandrou will be moving to Boulder, Colorado to start work on his Ph.D. in the lab of Professor Bobby Braun. Lysandrou will focus on guidance, navigation, and control for entry, descent, and landing of space vehicles.

“I really hope one day to work on the BFR,” says Lysandrou. SpaceX’s Big Falcon Rocket is a reusable launch vehicle and spacecraft system that is slated to take over all of SpaceX’s missions starting at some point in the 2020s. If Lysandrou’s history is any guide, it seems a pretty safe bet that he will get his hands on that BFR and he’ll continue to learn by doing, just like he has his whole life.