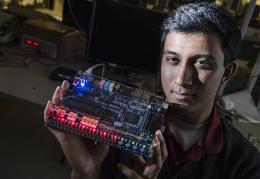 When Shiva Rajagopal went to high school in Fallon, Nevada there were no computer science classes offered. “But that was okay,” he says. “We did have a Tech Club where we would refurbish old computers and give them to families who could use them. I learned a lot about computers in that Tech Club.”

It is a safe bet that Rajagopal has learned even more about computers since his high school years. “When I was a kid I would always wonder ‘what would happen if I pushed this button?’ I was always trying to see how far I could push some piece of technology. Of course, things would break—then I would have to fix it before my parents got home.” As you might be able to tell, it wasn’t coding Rajagopal was interested in. “I always had my heart set on ECE. I wanted to know what was happening underneath the code.”

Rajagopal’s father had earned his Ph.D. from the School of Agricultural Engineering (now the Department of Biological and Environmental Engineering), with a specialization in Environmental Engineering at Cornell back in the 1980s, so when Shiva’s college search began, Cornell was certainly on the list. “The deeper I looked into the program, the more excited I got,” says Rajagopal. “We visited during my spring break and I got to sit in on a few classes. The big thing was Clif Pollock, now the Director of ECE, saw me and my parents walking around the halls and he invited us into his office and we talked for 20 minutes about how great Cornell ECE is. It was great. He did NOT have to do that.”

Rajagopal graduated with his Bachelor’s degree in Electrical and Computer Engineering in 2015. He is currently working toward an M.Eng degree at Cornell, also in Electrical and Computer Engineering. Spend a few minutes with Rajagopal and it becomes clear that he really likes thinking about--and working on--computer architecture, digital signal processing, and firmware engineering. Spend a few more minutes with Rajagopal and the reason for his interest in computers emerges. “I have always wanted to learn as much as I can and then go into industry,” says Rajagopal. “I want to be where I can have a direct effect on the world and make things that help the people around me.”

The Masters in Engineering (M.Eng.) program at Cornell is a one-year, project based program for students who, like Rajagopal, are interested in getting some practical experience before moving into the work world or whatever else comes next. The project Rajagopal has found, with the help of ECE Senior Lecturer Bruce Land, is a Biomedical Engineering project in the lab of BME Professor Jonathan Butcher. Together, they are working to improve a tool that measures tissue impedance. Electrical impedance is a measure of the tissue’s opposition to the flow of alternating electrical current through the tissue. Accurately measuring the tissue impedance can tell researchers important information about the tissue being studied and lead, in the longer term, to important breakthroughs in disease identification and treatment.

In addition to helping people through improved research tools, Rajagopal has been very active on campus in other realms as well. As a junior, he was inducted into the ECE honor society, Eta Kappa Nu (HKN). As a senior, Rajagopal was very active in HKN. “Cornell is one of the best ECE schools in the country; why shouldn’t we have an active HKN chapter,” says Rajagopal. As an M.Eng. student Rajagopal is now the President of Cornell’s chapter of HKN. “I saw that there was more HKN could be doing to be useful on campus. Some of what we have done has been about organization and documentation—building organizational memory and longevity. But we have also done some concrete things to make a difference.”

One of these concrete things has been the establishment of regular tutoring and review sessions for 2000 and 3000 level ECE courses to help all students succeed. Another had been the addition of more opportunities for HKN members to socialize and build connections outside of the lab and classroom. A third major change implemented has been an outreach program called Code for Kids in cooperation with the local Belle Sherman Elementary School in Ithaca. “HKN should be involved, otherwise what is it here for?” says Rajagopal.

Further evidence that Rajagopal is sincere when he says that, for him, it is all about having a positive effect on people is the fact that he served for two years as an undergraduate Student Assistant in William Keeton House and is currently serving as a Graduate Resident Fellow at Keeton House. “This has been one of the hands-down best parts of my Cornell experience,” says Rajagopal. “I sometimes get very busy with ECE, and being part of Keeton House keeps the human connection strong for me.”

Rajagopal will receive his M.Eng. degree in May and then it is off to Colorado for a bit of rest and recreation before he starts a job in August. It should come as no surprise that Rajagopal will be joining the firmware team at FitBit in San Francisco. It’s just another step on that same path that started in the Churchill County High School Tech Club of using technological skills to help people.