Update your fellow Cornell Engineering alumni on what you are up to. New job? New baby? Have you started a company? Developed an innovative technology? Done something wild and unexpected? 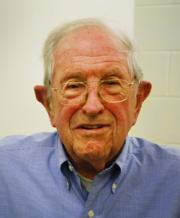 Herb started his freshman year in Civil Engineering in September 1941, and enlisted in the service in June 1942.  Service in the Air Force included time in the China-Burma-China Theater including the Battle of Meiktila, Burma, for which he was awarded the Bronze Star.

In the Spring of 1946, he returned to Cornell to finish his bachelors degree in Civil Engineering, which he completed two and a half years later.  In Fall of 1946-48 he lived in a house at 15 East Avenuean address where the Hotel School now stands!

Following graduation, Herb went to work for the State Highway Department in Connecticut, for four years. This included much time on the construction of I-95 over New Haven Harbor.

Motivated to get a Masters degree, Herb enrolled at Rutgers University Engineering College. It was also at Rutgers where Herb met his future wife, Catherine, who was then teaching courses in the Department of Human Ecology.  They married in 1953 while he completed his Master of Science. Herb and Catherine had six children: four sons and two daughters.

With a masters degree secured, Herb settled in North Jersey where over the course of 12 years, he worked for three prominent geotechnical engineering companies.

In 1981 Herb started his own company.

Herb eventually relocated to Trumbull, Connecticut, where he provides geotechnical consulting services through his business, Lobdell Consultants, still to this day. During the CEE Alumni Breakfast this past June, Herb reacquainted with a fellow CEE alumnus Richard Boggs. While catching up, they realized they live just 10 miles away from each other in Trumbull!

Herb is a Cornell enthusiast, and at the age of 94 he still enjoys attending Cornell events whether it be here on campus or out of Ithaca.  As a Cornell student, he played lightweight football for the University.  For many years outside activities included sailing and tennis. Currently he enjoys traveling and photography, particularly landscape and wildlife. This past July he traveled with his son, Tim, to the Galápagos Islands.

How are you today, Carl?   Everything going well?  Jt

Please use this information to update the address for William Zachary Rayfield.