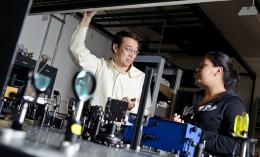 Shattering expectations to learn about the brain

Chris Xu, professor of applied and engineering physics at Cornell, was at a White House conference as an invited guest in September, 2014. He was there to celebrate the progress made by researchers who are part of President Obama's BRAIN initiative. Xu was included in recognition of his exciting progress in creating new tools for brain imaging. Xu has 28 patents either granted or pending and his work on multiphoton microscopy is allowing researchers to image the mouse brain in living specimens at previously unattainable depths and resolution.

But for a boy raised in a poor neighborhood of Shanghai during Chairman Mao’s Cultural Revolution of the 1970s, being invited to the White House as an honored guest would probably have seemed unimaginable. “I look back at my life and it is amazing where I have been able to go and what I have been able to do.” says Xu.

Life in China changed dramatically after the Cultural Revolution. Xu took a test at the age of 12 and ended up with a spot at the best middle school in the country. “One day I was living in a neighborhood where maybe one person in ten thousand actually went to college. My dad never spent one day of his life in a formal school. But then there I was at a boarding school with the cream of the crop. It was at that middle school that a physics teacher opened my eyes to the world outside China and the wonderful world in physics,” says Xu. Fast forward to the early 1990s. After earning a B.S. in physics from Fudan University in 1989, Xu came to Cornell to get both his Master’s and his Ph.D. in applied physics.

Cornell Engineering professor Watt Webb and doctoral student Winfried Denk had just invented a new imaging technology called two-photon microscopy and Xu joined Webb’s lab. “Working with Watt Webb was one of the luckiest breaks of my life,” says Xu. “He explained the project and it just clicked with me—it made so much sense.” This was the beginning of Xu’s research in optics and biological imaging, which form the foundation of his current interdisciplinary research.

Xu earned his Ph.D. in 1996 and then joined Bell Labs, a place he dreamed about when he was in high school. At Bell, Xu moved into new research areas in fiber optics and telecom, and invented breakthrough technologies for high bit-rate, long distance optical transmission. “At the time,” says Xu, “all sorts of money was flowing in and you could pursue any idea in telecom.” It was while he was at Bell Labs that Xu got his first exposure to the business and financial side of high-tech research. “At Bell I learned how things like practicality, cost, and politics all come into play when you are developing any sort of product,” says Xu. He also got to see first-hand how large-scale economic trends make themselves felt in industry research labs during the heydays of the dotcom bubble and crash.

After six years at Bell Labs, Xu decided to enter the world of academia. He joined the faculty of the School of Applied and Engineering Physics in 2002 and he has been with Cornell ever since. Currently, Xu is working on what he has called “one of the most exciting projects I have ever engaged in in my entire life.” Put simply, he and his colleagues are creating new technologies that will allow in vivo imaging deep into the brain. “During my middle school years, I told myself that I should only work on two things: the universe and the brain, because both are so mysterious,” he said. “It is certainly wonderful to be able to pursue a childhood dream.”  “We are also developing new medical endoscopes for non-invasive, real-time diagnostics of tissue without use of dyes or contrast agents,” says Xu. “It is hard because it is all new. We have to make the tools we need in order to simply make the tools we need. We are turning a 200 pound microscope into a 2-gram handheld device. The challenges are enormous.”

Xu may attribute a fair amount of his success to the schools he attended and the great mentors he had in life, but it is clear that something else is at play as well. Chris Xu has worked hard his entire career to master difficult concepts and challenging technology. His drive for excellence and efficiency, and his fearless pursuit of new ideas have been the cornerstones of his career. Xu’s multiphoton microscope will play an important part in meeting the BRAIN initiative’s goal of understanding everything about the brain. The medical endoscopes will be a valuable tool in diagnosing cancers and other diseases in far less invasive ways than done currently. It is a long way from the neighborhoods of Shanghai to Ithaca and the White House and no one is more aware of this distance than Chris Xu. “At some point in each day I remember how lucky I am,” says Xu, “and then I get back to work.”