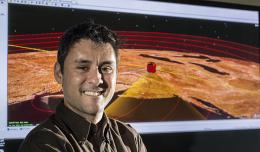 When you use a smartphone to place a call, send a text, or access your bank account, do you ever stop to consider the exquisitely timed and balanced technological system you are tapping into? It seems a very simple thing to press some virtual buttons on a screen and, seconds later, find yourself speaking with a friend in India, or sending a smiley face emoticon to a sibling, or checking your bank balance. But really, it is no simple thing at all. The system in place to make these activities easy for you is incredibly complex. It includes the phone in your hand, the cell towers in the distance, and, in some cases, the communications satellites in orbit.

While you may not spend a lot of time thinking about the complex system that makes modern telecommunications possible, Daniel Selva does. And it’s not just phone systems Selva thinks about; it is also the national power grid, mobile payment systems, hybrid car design, and advanced aircraft. Selva, who is an assistant professor in the Sibley School of Mechanical and Aerospace Engineering at Cornell, studies system design and architecture.

When he was growing up in Spain, Selva didn’t spend much time thinking about system architecture. “No, I wasn’t one of those kids who takes things apart just to see how they work,” says Selva. “In fact, at 14 I really wanted to be a professional tennis player. But…I wasn’t that good at tennis. I was much better at math.” Following his interest in math, Selva enrolled in the Universitat Politecnica de Catalunya for a degree in electrical engineering, with a focus on telecommunications. He then applied for a competitive placement at the École Nationale Supérieure de l'Aéronautique et de l'Espace in Toulouse, France. There, he earned a second degree in aeronautics and astronautics.

“Going to France for that second degree changed my life,” says Selva. “In Spain, most people stay in their own city for college. For me, it was eye-opening to live in another country and learn another language. It also opened up the field of space to me.” Once Selva had broken the unspoken rule about staying in one's hometown for college, it was easy to just keep pushing the boundaries. Upon graduation, Selva took a job in French Guiana working for Arianespace—a French commercial satellite launch company. “I worked on many different systems within the rocket,” says Selva. “Eventually, I made it to a position where I had to take a system-level approach to problem solving.”

Selva explains that there are two levels of fixing a problem: one is ‘let’s fix this thing and get it out of here quick,’ and the other is ‘let’s fix this right so that it doesn’t happen again.’ “Working on the Ariane rocket, I was mostly having to do the first kind of fixing, since there was a launch schedule and delays were very expensive,” says Selva. “I wanted to do more of the second kind of fixing—to get closer to the conceptual design of complex systems.” So, Selva left Arianespace and started a Ph.D. program in space systems at MIT. From there, it was a short step to thinking broadly about complex systems in general and how best to design them.

In his role as a professor at Cornell Systems Engineering, Selva wants to create tools that will help people design better systems. The key, according to Selva, lies in the first ten questions you ask when designing the architecture of a system. “The range of answers to those first ten questions demarcates the design space you are working in,” says Selva. “Those answers determine what is possible within your system.”

For example, if you want to design a constellation of weather satellites, you have some basic questions to answer: What range of capabilities would you like to include? What range of lifespans would be acceptable? To what degree should capabilities be bundled together or distributed? How will the satellites be placed into orbit? What degrees of autonomy would be acceptable? Selva and his Ph.D. advisor Edward Crawley have recently published a textbook called System Architecture: Strategy and Product Development for Complex Systems.  In their book, (co-written with a third author, MIT Lecturer Bruce Cameron), they stress the importance of these early-system decisions. They also focus on the human element in system architecture design.

“In any complex system, there are usually many stakeholders,” says Selva. “And often the priorities of these stakeholders are a bit fuzzy—they can’t say exactly what it is they want.” According to Selva, this uncertainty is okay. “It is essential when designing a system architecture that you remain as solution-neutral as possible in the early stages of the process,” says Selva. If your biases exert control over your design space, you might not end up with the best system architecture possible. Selva would like to create software tools that people can use when creating a complex system. He wants to bring together the advantages of humans and the advantages of computers by combining experience-driven approaches with data-driven approaches.

Currently, Selva is combining his academic specialties by developing a system architecture facility devoted to satellite systems. It will contain several knowledge-based systems and several advanced machine learning algorithms. The two together will help design the satellite constellations of the future. “This facility has the potential to help humans identify more robust and cost-effective architectures for large space systems combining nanosatellites, hosted payloads, and commercial services,” says Selva.

Now if only Selva could figure out a way to design a system that would turn him into a better tennis player. Sadly, this might be a system too complex for even Selva.