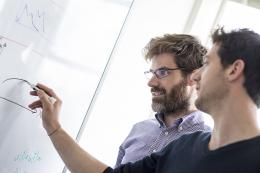 Taking a closer look at friction

David Kammer, Assistant Professor of Civil and Environmental Engineering at Cornell, studies what happens at the interface where two materials slide against each other. For such a common phenomenon, little is known about what exactly happens where the sneaker meets the pavement, the rubber meets the road, and the tectonic plate meets another tectonic plate.

In one line of research, Kammer uses high-performance simulations to model friction between two solids and to measure where surfaces stick, where they slide, and what sort of forces they are under at multiple points of contact as horizontal force is applied. “I am working to provide a systematic understanding of what is really going on in there,” says Kammer, as he points to the place where a sliding block and the table top meet. “We are finding that Coulomb’s Law of Friction, though often a convenient first approximation, isn’t exactly right. There is room to establish a better approach and that is one of the things I hope to do.”

Kammer joins Cornell’s School of Civil and Environmental Engineering after completing his Ph.D. in mechanics at the Ecole Polytechnique Federale de Lausanne (EPFL) in Switzerland. He also earned his B.S. and his M.S. in civil engineering from EPFL.

Kammer grew up in the German-speaking part of Switzerland where, he says, “I was not a stereotypical child engineer who always took things apart. I did build things out of Legos a lot, but I was not very interested in technology.” Instead, Kammer wanted to be a doctor. There is a famous comic book character in Switzerland named Globi. Globi is an anthropomorphic blue parrot who wears red and black checkered trousers and a black beret. He is akin to Mickey Mouse in the United States. Kammer remembers very clearly reading one edition of Globi’s comic books wherein Globi got to be part of a mountain rescue and emergency helicopter medical transport team.

“From that day until the final year of high school,” says Kammer, “I wanted to be a doctor.” But Kammer’s path to medical school was rerouted when a Career Day lecturer he wanted to see cancelled, and Kammer instead went to a presentation by a civil engineer. “The guy did such a strong presentation,” says Kammer. “It really impressed me. I wrote to him the next day and he invited me to shadow him at work for a week. He even paid me to do some work for him.” From that moment on, Kammer wanted to be an engineer.

In retrospect, he says the things that attracted him to medicine are the same things that drew him to engineering. “Some things that are very important to me are to work with people, to understand things deeply, and to feel that the thing I am doing helps people,” says Kammer. “Engineering allows me to do all of these.”

What Kammer learns about the interface where two materials slide against each other could eventually be useful in understanding and possibly predicting earthquakes. It will also have bearing on the development of predictive models for the failure of layered materials under load. In his research, Kammer develops and uses numerical simulations and theoretical models from applied mechanics to understand “what is really going on in there.”

Kammer decided to join the faculty at Cornell because of the excellent atmosphere for research and the institutional dedication to collaboration. “I don’t think there could be a better place for me,” says Kammer. “I have Greg McLaskey, Chris Earls, and Derek Warner all right on the same floor of my building. The chances to work together are endless and our strengths really mesh well.”