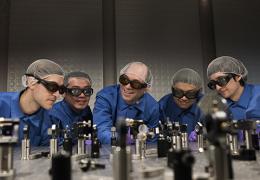 Breaking rules to slow down time

Jeffrey Moses is not satisfied to simply know that something happens. He wants to know why it happens. In high school, chemistry was a favorite subject and Moses found himself drawn to the physical aspects of the subject. He was curious about the shapes of atoms and how they determine why a bond might form. When he took organic chemistry as a freshman at Yale, he had a professor whose specialty was physical chemistry. This professor seemed to enjoy the same aspects of the discipline. “When I got to Yale I thought I was going to major in chemistry,” says Moses during a recent conversation in his office at Cornell’s Clark Hall. “But by the end of freshman year my focus had changed to physics—physics gave me a way to start to answer the ‘why’ question as I saw it, and to avoid the more complex things that chemists admirably tackle!”

These days, Moses is an assistant professor in the School of Applied and Engineering Physics (AEP) at Cornell Engineering. His location has changed from Westchester to New Haven to Ithaca, but his search for the why continues. To get at why certain complex biological and chemical processes happen, Moses is shining a light on things never before illuminated. At this point you may be thinking ‘enough with the flowery hyperbolic language,’ but there is no hyperbole here. Jeffrey Moses is literally developing new light pulse technologies that can shine light on ultrafast phenomena never before captured in real time.

After earning his B.S. in applied physics from Yale, Moses came to Cornell where he worked with Professor Frank Wise and earned his Ph.D., also in applied physics. “It was great to be in Frank Wise’s lab for many reasons,” says Moses. “I learned from Frank the importance of selecting topics of research for their potential impact, not just because they involve interesting problems.” From Cornell, Moses went to MIT, where he worked as a research scientist and principal investigator of federally sponsored research programs in ultrafast laser methods, laser technology, and molecular physics. “The team’s work at MIT was motivated by wanting to create new sources of light that could push forward fields of science and technology, especially those where brief, light-driven processes are essential,” says Moses.

Moses joined the faculty at Cornell in 2014. At Cornell he is focusing on using the sources of light developed in his previous work to capture elusively brief events in materials, both natural and manmade. “Imagine how a strobe light can be used in photography to capture a moment,” says Moses. “The iconic photos of milk drops forming and splashing or of a bullet passing through an apple were taken using microsecond strobe lights to illuminate an instant that is then captured on film.” Moses is creating laser pulses lasting just millionths of a billionth of a second (femtoseconds), and sometimes shorter, in order to illuminate ultrafast events that can fundamentally change the way matter behaves on much longer timescales, such as those relevant to biology.

When photons strike the human retina, a reaction happens that triggers a signal to move along the optic nerve and to the brain. Jeff Moses is interested in the fastest event that takes place during the reaction: the change in behavior of electrons during the first instant that light reaches a molecule of rhodopsin.  This in turn causes the light-absorbing part of the molecule to straighten out in shape. Straightened rhodopsin molecules then begin a chemical process that alerts the brain that light has been detected. “The amazing thing is that there are many examples in which the subtleties of electron behavior lasting just the first few tens of femtoseconds after interaction with light can determine how a system behaves on much longer timescales,” says Moses. “Even events on biological timescales can be determined in this tiny fraction of a second!”

And what, exactly, is happening in organic photovoltaic cells at the moment when sunlight strikes the material? Based on the findings of other researchers, Moses believes there is good reason to explore the behavior occurring in just the first one hundred femtoseoconds. By learning about what happens at that exact moment, we may be able to create more efficient photovoltaic cells.

The problem is, there are currently no recording devices fast enough to capture as brief a glimpse of these events as what happens in a few femtoseconds. Jeff Moses is working to change that. His 10-Femtosecond Hyperspectral Stroboscope, funded by an Air Force Office of Scientific Research grant, is designed to produce short pulses of light at different frequencies, covering a very broad range – from ultraviolet to mid-infrared. The pulses are timed so that one pulse serves to cause a reaction and the second pulse illuminates how the electrons, or other aspects of a material, have responded to the first pulse.

Moses’s paper describing one of his innovations--a source of octave-spanning mid-infrared light with full control over both amplitude and phase, was recently published by the journal Nature Photonics. Moses likens this innovation to programming a synthesizer to play notes in a specified sequence and rhythm. Rather than musical notes, Moses has found a way to produce a multi-octave spectrum of light frequencies from a laser over a time-frame of just a few tens of femtoseconds.

“I’m excited because we will be able to use this laser ‘stroboscope’ for a wide range of studies,” says Moses. “Being able to ‘see’ what is happening to electronic structure immediately after an impulse of light disturbs a material system from its equilibrium state could have an impact in physics, biology, chemistry, energy storage---anywhere that the absorption of light switches the behavior of materials on femtosecond timescales.”

As Moses discusses his work and its potential, it becomes clear that he is thinking of the long-term. He does not have a shelf with fifteen ready-made units waiting to ship off to researchers around the university and around the world. “We know we can make light do certain things,” says Moses. “But making that happen requires many hours of dedication by a large team of talented people. To go from the idea to the practical reality can take a number of years.” The irony that it takes years to build an instrument that can capture events that take place in a millionth of a billionth of a second does not seem lost on Moses.

Back when Moses was a student at Yale he participated in undergraduate research during the summers before his junior and senior years. He says this experience is what allowed him to first see the attraction of the academic life. “I was drawn to the freedom,” he says. “Academic researchers are able to take the time they need to understand something just because they want to. And now I get to do the same thing, and work with a talented group of graduate and undergraduate students.” Even after just an hour or two in the company of Jeff Moses, it is hard to imagine anything that would make him happier.