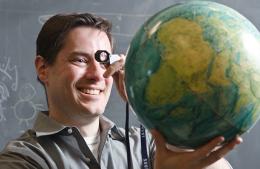 One way to learn about the movement of magma below the Earth’s surface is to travel to a place where magma is flowing or pooling belowground and take measurements. If you were to decide on this course of action, you might find yourself in the Bolivian highlands or somewhere in the Chilean Andes, setting up seismometers and GPS antennas. Another way to study the movement of magma is to use RADAR from satellites in low Earth orbit to measure subtle, (or not-so-subtle), changes in the shape of the surface.

If you are Matthew Pritchard of the Department of Earth and Atmospheric Science at Cornell, you do both.  Pritchard has been using direct on-site observation and data collected from satellites to create a more complete picture of how the ground around (and on) volcanoes deforms in response to magma moving below the surface.

“RADAR is an amazing tool for us,” says Pritchard. “It can see at night. It can see through clouds. It is really useful for monitoring dynamic situations when people just cannot get there fast enough. And, it can measure very subtle changes in the Earth’s surface down to the millimeter.” Pritchard could simply rely on RADAR data for his research, but he knows that he would not be getting the full picture of what is going on. “In Earth Science, a key motivation to do research in another country is that you have to go to the place to better understand the forces that shaped it and are still acting there today,” says Pritchard. “To better understand the processes behind earthquakes and volcanic eruptions, we study them where they are occurring or have recently occurred.” He continues, “Having local knowledge is key for scientific understanding.”

Cornell’s Department of Earth and Atmospheric Science does not have enough resources to launch its own satellite dedicated to gathering data about bulges and subsidence on the Earth’s surface. No University does. But many nations do, so Pritchard gets his data wherever he  can.  Looking ahead, Pritchard is very excited about a satellite set to launch in 2020. NASA is working with the Indian Space Research Organisation to put into orbit a satellite that, when combined with data from other satellites, will be able to monitor every volcano on Earth every six days. This will be a major step forward, as there are currently some volcanos that have never been studied.

“There is going to be an onslaught of data,” says Pritchard. “And I am very excited. We will be able to find all sorts of bulges and subsidence features and we will start to see if there is a connection to eruptions.” Having access to all of this data may push the field of forecasting volcanic eruptions forward by leaps and bounds. “The goal in the long term is to improve our predictive capability,” says Pritchard. “We will be able to see if there are diagnostic features that are precursors to a volcanic eruption.”

Another goal for Pritchard is more basic than improved eruption forecasting. “RADAR can measure ground uplift and sinking due to all sorts of causes. Having more complete data will help us illuminate the complexity of what happens as magma moves under the surface, but it will also allow us to see the effects of aquifer depletion, sea-level rise, and subsidence due to gas and mineral extraction,” says Pritchard.

The ground beneath our feet may feel permanent and unmoving, but that is only because we don’t have access to the satellite data. Matthew Pritchard does, and he is working toward the day that the rises and falls of the surface can be interpreted and used to communicate risk better to policy makers and the general public. “Someday in the not-to-distant future we will wire the whole Earth,” says Pritchard. “There is still a lot to discover about the planet and it is so exciting to think about.”