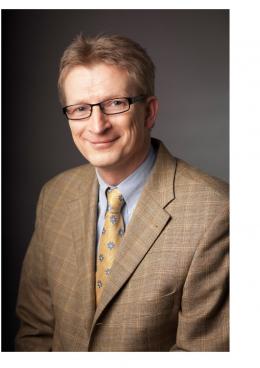 If you were to ask people what materials scientists do for a living, “fighting metastatic melanoma” would probably not show up on many people’s lists. But that is exactly one of the lines of research and application Ulrich Wiesner is pursuing. Professor Wiesner, of the department of materials science and engineering at Cornell, is pushing materials science out of its traditional bounds and into the area of cancer treatment. The groundbreaking tools Wiesner and his colleagues at Memorial Sloan-Kettering Cancer Center are using are designer nanoparticles called C dots.

Wiesner has been working on the particles he originally named “Cornell dots” for more than ten years.  Inspired by the structure of a major type of algae called diatoms, Wiesner creates the frame for his C dots out of silica. “Silica makes a good platform for the biomaterials we attach,” says Wiesner. “We know that silica can be safe in the human body.”  The silica framework is chemically inert and produced in a size small enough to pass through the human body and out with the urine.

To understand how these C dots can be useful in fighting cancer, it is important to understand just what makes some forms of melanoma so deadly.  Melanoma is a type of skin cancer that develops in the cells that produce melanin—the pigment that gives skin its color. In their early stages, melanomas are often overlooked or mistaken for normal moles. Surface melanomas often cause no pain and can be easy to miss or ignore.  As melanomas grow, they spread down into deeper layers of tissue, where cancer cells can enter the lymphatic system and be carried to nearby lymph nodes.  If the body’s defenses fail to kill these cells, they can then spread to other parts of the body, often with deadly consequences.

Wiesner and his research team have created a way to coat the C dots with polyethylene glycol, so that the body’s defenses will not attack them. Each of the silica spheres encloses several molecules of a highly visible dye. Most importantly, the dots are given a coating of organic molecules that specifically bind to tumor cells when the nanoparticles come into contact with them. In concert, these multiple functions combined precisely on one particle allow doctors for the first time to directly visualize whether a cancer has spread to a particular lymph node.  When combined with an optical imaging system called the Artemis Fluorescence Camera System made by Quest Medical Imaging, doctors may soon have a powerful new optical tool in the surgery room in the battle to save the lives of those suffering from metastatic melanoma.

When discussing this innovative use of C dots, Wiesner sounds a note of caution. “We are still years away from full approval for clinical use. Lots of things can happen.” An earlier trial with five patients at Memorial Sloan-Kettering showed that C dots are safe and effective in humans.  “A major goal of the first human trial was to confirm that the C dots would either target or clear,” says Wiesner. This means the C dots, once injected into the body, would do only one of two things—they would either bind themselves to a cancer cell or they would pass out of the body through the urine in a safe amount of time.

After sounding the strong note of caution, Wiesner allows himself to talk about best-case scenarios, though each time he does, it is couched in qualifiers like “If this proves effective” or “If things turn out the way we hope they will.” It is clear Wiesner does not want to give false or premature hope to those suffering from cancer or to their loved ones before treatments based on his C dots are fully developed and approved. Wiesner’s approach to treating melanoma is driven by intellectual curiosity, but also by a personal connection. His father died of the disease. In an earlier interview Wiesner said, “Cancer is a terrible disease, and my family has a long history of it. I have a particular personal motivation to work in this area.” By creating a new type of nanoparticle and tailoring its qualities, Wiesner is creating a new front in the battle against cancer. “If by the time I retire this is in use, I will be really happy.”