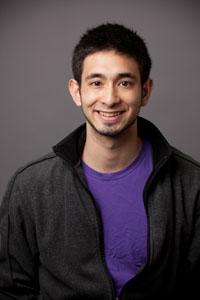 When Ricky Panzer was in the 9th grade he started an Excel spreadsheet to keep track of his invention ideas.  The movie Ironman had just come out and Panzer, like many people who saw that movie, wanted to be Tony Stark.  Tony got to break the rules because he was an Idea Guy with the technological skills needed to make his ideas reality. Panzer, too, was an Idea Guy, but in the 9th grade he lacked the necessary hard skills to produce working models of what was in his head.  He was an unconventional kid with big ideas, but not enough know-how to bring these ideas to life.

Today, Panzer is charting his own surprising course through Cornell.  He is a student who has strong ideas about his own education. Rather than opting for an existing degree program, he has chosen the Independent Major option offered by Cornell Engineering.  This option allows him to create his own plan of study, focusing on what he feels he needs to learn in order to realize his vision.

Panzer knows that the usual course for engineers is to get an undergraduate degree, spend a few years at a job, then maybe go to grad school.  If you have ideas of your own, you wait a few years to see if they are still kicking around in your head.  If they are, then, maybe, you act on them.

Panzer sees no reason to wait until graduation to act on his many ideas. Says Panzer, "There are a lot of amazing things you can learn from your classes, but the things you do outside of class also provide a ton of value."  What Panzer has done outside of class has shown just how visionary and entrepreneurial Cornell Engineers can be. He has started a non-profit corporation and  a for-profit website, helped develop a co-working entrepreneurial space, and created a tech start-up that is earning praise, attention, and backing.  All of this, and he has not yet graduated.

At 17, Panzer knew he needed to go to a top-notch engineering school to learn what he was lacking.  He had always been excellent in math and the sciences, so he had his choice of where to go for school.  He chose Cornell.  "I didn't want to be at just an engineering school," says Panzer.  "I wanted to be at a place where I could be around people who weren't all engineers."  Collaboration is highly valued at Cornell Engineering; students and faculty are encouraged to seek out others whose interests, knowledge, and curiosity might mesh well with their own.  Panzer has taken full advantage of the culture of collaboration at Cornell by partnering with an eclectic group of students from a variety of academic backgrounds.

One of these collaborators was Hotel School major Alex Friedman.  Together, the two freshman launched a non-profit with the aim of providing shoes for children in Zambia.  The shoes were a requirement for the children to be admitted to school.  Another non-engineer Panzer worked closely with was Johnson School of Management student Arthur Soroken.  Panzer and Soroken launched a website called thecom.it that provides feedback for startups from an online network of entrepreneurs.

After the success of thecom.it, Panzer says he "caught the entrepreneurial bug."  He started getting together for dinner once a week with two other student entrepreneurs to talk about ideas.  Before long the group grew from three to thirty.  "Getting together with a multi-disciplinary group in the same space is really powerful," says Panzer.  From these dinners grew the idea for the PopShop, which Panzer quickly became heavily involved with. PopShop's website says it is a place "designed to enlist the local startup community to do epic things in the service of making the world a better place.  Popshop is a space for programmed exchange and chance encounters, a launchpad for startups and shenanigans. It's about filling the gaps between people, projects and disciplines. It's about welcoming the new and making connections between seemingly unconnected things." Initially, the Popshop opened as a month-long experiment.  That first month went extremely well and Cornell University's Student Agencies and Entrepreneurship at Cornell  took over funding.  This allowed PopShop to move into a bigger and better space and take on a life of its own in the summer of 2013.

In his junior year, Panzer was chosen as a Kessler Fellow.  This innovative program awards a small number of Cornell Engineers a grant, a spring course titled "Essentials of Entrepreneurialism," and a summer placement in a start-up or other entrepreneurial environment.  The program at Cornell was started in 2009 to give juniors in the Engineering College real world entrepreneurial experiences.  The program was made for someone exactly like Ricky Panzer, who says, "the Kessler fellowship has been instrumental to my Cornell career."  Of course, being someone who makes his own way, Panzer bent the rules of the fellowship by creating his own start-up for his summer placement.

That start-up, called Splat, is Panzer's newest endeavor.  Splat is a hardware platform that plugs into smartphones to allow users to play laser tag, treasure-hunting games, Harry Potter-themed magic games, and other apps created specifically for the Splat device. The entire Splat development team, many of whom are Cornell engineers, spent the summer of 2013 in Silicon Valley, with an $18,000 grant, free workspace, and an investor mentor, all courtesy of Highland Capital Partners.  Panzer, who is scheduled to start his senior year at Cornell this fall, says he learned a lot about leadership this summer.  "The biggest thing is that anyone can have great ideas."

Ricky Panzer has been charting his own course through Cornell since he got here.  He has created his own major, created his own company, taken a leave of absence to grow that company, and helped develop a space for entrepreneurs to get together and see what grows out of their interactions.  With all of this experience under his belt, it might be time for Panzer to open up that Excel spreadsheet and see what he can do with some of those ideas.