Close
Back to Events

Abstract
This talk will discuss some of the emerging device concepts in spintronics for energy-efficient memory-intensive computing and communications. We will first review the recent progress and perspectives of voltage-controlled nonvolatile magnetic memory devices, which offer ultralow dynamic energy dissipation, as well as reduced standby power due to nonvolatile data retention, and are uniquely suited to emerging memory-intensive computing paradigms. We will then discuss some of the implications of material and device-level advances of voltage-controlled magnetic tunnel junctions in the area of microwave detectors, which may be relevant to energy-harvesting and communications in ultralow-power systems. As a strategy to further reduce switching time and write energy, and enable deep scaling of magnetic random access memory (MRAM), we then examine free layer structures based on antiferromagnetic materials.

Spintronic devices based on antiferromagnetic (AFM) materials offer potential advantages over their ferromagnetic counterparts such as picosecond switching, high-density device arrays without inter-bit-dipole interactions, immunity to external magnetic fields, and generation of Terahertz signals at the nanometer scale (i.e. THz nano-oscillators). Analogous to the case of ferromagnetic devices, AFM spintronic devices must achieve two main requirements: 1) A reliable electrical method for reading the magnetic state of the AFM, and 2) an energy-efficient and scalable method to modify (i.e. write) its magnetic state. This talk will focus on the second requirement, describing recent progress in switching the Néel vector of an antiferromagnetic device by two methods: (i) Voltage-controlled modification of the interfacial magnetic anisotropy (VCMA) and (ii) Current-induced spin-orbit torque (SOT). 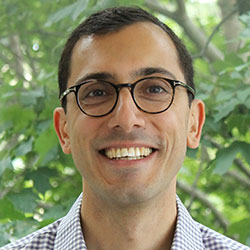 Biography
Pedram Khalili Amiri is Associate Professor of Electrical and Computer Engineering at Northwestern University, and Director of the Physical Electronics Research Laboratory. Prior to joining Northwestern, he was an Adjunct Assistant Professor and Research Associate in the department of electrical and computer engineering at the University of California, Los Angeles (UCLA). Since 2009 he has led multiple research programs on voltage-controlled MRAM, spin-transfer-torque MRAM, and nonvolatile spintronic logic working with several major industry partners, which resulted in some of the fastest and most energy-efficient magnetic memories to date, from device-level to array-level prototypes. He and his team placed top-6 out of 3,000 entries worldwide in the Cisco Innovation Grand Challenge 2015.

Pedram has published over 100 papers in peer-reviewed academic journals, and is an inventor on 15 issued patents. He received the B.Sc. degree from Sharif University of Technology in 2004, and the Ph.D. degree (cum laude) from Delft University of Technology (TU Delft), The Netherlands, in 2008, both in electrical engineering. He serves on the Editorial Board of Journal of Physics: Photonics (IOP), and has served as a Guest Editor for the journals Spin and Micromachines. He has served on the technical program committee of the Joint MMM/Intermag Conference, and is a member of the Flash Memory Summit conference advisory board. He is a Senior Member of the IEEE.