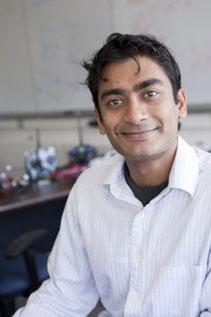 Ashutosh Saxena is an assistant professor in the Computer Science department at Cornell University. His research interests include machine learning, robotics and computer vision. He received his MS in 2006 and Ph.D. in 2009 from Stanford University, and his B.Tech. in 2004 from Indian Institute of Technology (IIT) Kanpur. He has also won best paper awards in 3DRR, RSS and IEEE ACE. He was named a co-chair of IEEE technical committee on robot learning. He was a recipient of National Talent Scholar award in India and Google Faculty award in 2011. He was named a Alred P. Sloan Fellow in 2011, named a Microsoft Faculty Fellow in 2012, received a NSF Career award in 2013, and received a Early Career Spotlight Award at RSS 2014.
He has also developed algorithms that enable robots (such as STAIR, POLAR and Kodiak) to perform household chores such as unload items from a dishwasher, place items in a fridge, arrange a disorganized house, etc. He has developed learning algorithms for perceiving environments from RGB-D sensors and infer semantic labels, object affordances for tasks such as activity detection and anticipation. Previously, Ashutosh has developed Make3D (http://make3d.cs.cornell.edu), an algorithm that converts a single photograph into a 3D model. Tens of thousands of users used this technology to convert their pictures to 3D. His work has received substantial amount of attention in popular press, including the front-page of New York Times, BBC, ABC, New Scientist Discovery Science, and Wired Magazine.

Developed a new graduate course called "3D perception". Made improvements in CS 4758 Robot Learning course that he started 2 years back. Started an explicit lab component in the CS 4758 course.